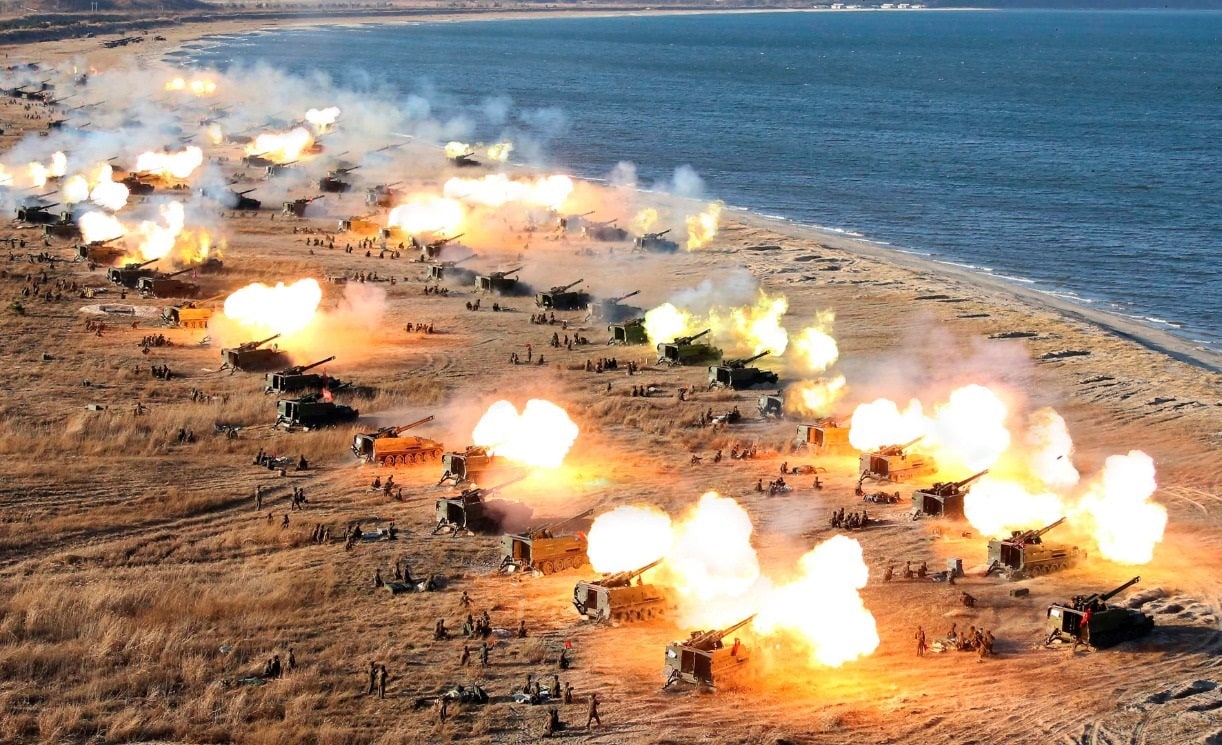 This wasn’t supposed to happen. In the summer of 1950, America was still savoring the glow of absolute victory in World War II. There was the Soviet threat, to be sure, and a Communist bloc swelled by the massive addition of China in 1949. But the United States still had the bomb, and the B-29s to carry the bomb, and the world’s most powerful navy besides. There was great certainty that the next war would be an atomic conflict waged by the Air Force and Navy, with the Army reduced to a clean-up crew for occupying the rubble.

Eager for normality after four years of exhausting total war, the American public also wasn’t in the mood for a large, expensive conventional army. So the Army of the late 1940s saw its budget trimmed, live-fire training restricted and basic training cut to as little as eight weeks (compared to ten or more weeks today). This was especially of the U.S. Army occupation forces in Japan, who had a soft job overseeing a remarkably docile Japanese population.

Unfortunately, there was nothing soft about the seventy-five thousand North Korean soldiers who crossed the thirty-eighth parallel on June 25, 1950. Many of its soldiers were veterans who had fought with Mao in the Chinese civil war, and they were well equipped with Soviet-made tanks, artillery and even fighters and bombers that initially gave North Korea control of the skies. Much like the Iraqi army faced by ISIS or the Afghan army fighting the Taliban, the U.S.-trained South Korean army disintegrated.

Backed by a UN mandate to use force (made possible by the Soviet envoy foolishly boycotting the vote), the United States began dispatching troops to save South Korea from conquest by Kim Il-sung’s troops. Naturally, the first to arrive were occupation troops airlifted from nearby Japan. By July 1, American combat boots were on the ground, in the form of Task Force Smith—a scratch force commanded Lt. Col. Charles Smith that was centered around two understrength rifle companies from the Twenty-First Infantry Regiment of the Twenty-Fourth Infantry Division. The scratch force had just over four hundred officers and men, plus a few 105-millimeter howitzers from attached artillery battalion. It had no tanks, no close air support and poor communications. Instead of the latest antitank rocket launchers, most of its tank-killing firepower consisted of 2.36-inch bazookas that hadn’t even been able to destroy German tanks five years before. Some of Task Force Smith’s offices and NCOs had seen action in World War II, but most of the troops were inexperienced.

Dispatched north to halt the North Korean advance, Task Force Smith dug in near the town of Osan. On the morning of July 5, a column of North Korean T-34/85 tanks from the 105th Armored Division attacked in what would be the first U.S. ground action of the Korean War.

What happened next seems inevitable in hindsight. The U.S. howitzers had HEAT antitank rounds, but only a few, and too few to stop the North Korean tanks from overrunning the American positions. The tank assault should have been repulsed by Task Force Smith’s bazookas, except that the rockets couldn’t penetrate the armor of the Soviet-made vehicles.

At the same time, Task Force Smith also faced encirclement by North Korean infantry. Smith decided it was time to withdraw. “The plan was for an orderly leap-frogging withdrawal, with one platoon covering another,” said one account. “Under heavy enemy fire, the poorly-trained American troops abandoned weapons and equipment in sometimes precipitous flight. Not all of them had received word of the withdrawal, and it was at this point that the Americans suffered most of their casualties.”

The Americans lost about eighty men killed and wounded, and about the same number captured—or almost half of Task Force Smith. North Korea suffered about 130 casualties, plus four tanks destroyed or immobilized. The American sacrifice had delayed the North Korean advance—but only for a few hours. Six years before, the U.S. Army managed to stop Hitler’s SS panzer divisions at the Battle of the Bulge. In July 1950, the Army was a speed bump.

In the grand scheme of things, the battle wasn’t a major disaster. The casualties were only a drop in a Korean bucket that eventually consumed fifty-four thousand American dead. U.S. troops had fled the battlefield, but they had also done that at Bull Run and Kasserine Pass. It wasn’t the first time that “inferior” Asians had humbled American forces, as the survivors of Pearl Harbor could attest. Two months later, it was turn of Kim Il-sung’s army to disintegrate after MacArthur’s landing at Inchon.

If the only lessons of Task Force Smith was that inexperienced soldiers with poor training and equipment do poorly on the battlefield, or that a nation shouldn’t let its army lapse into decay, these would be mere clichés. The real lesson is what happens when the U.S. military commits to a conflict totally different from what it has prepared for. It is an issue still with us today, as America ponders its strategy in a world where China is powerful, Russia is resurgent, terrorists run amok and nonstate actors like ISIS field armies with advanced weapons. America doesn’t have the resources to be powerful everywhere all the time, which means the Pentagon will have to make assumptions about the nature of war and how best to prepare for it. Will it be high-tech or low-tech? Big war or small war? Conventional warfare or guerrilla campaign? Remember that China and Russia must also make their own assumptions.

It’s a guessing game, but real people will pay the price.