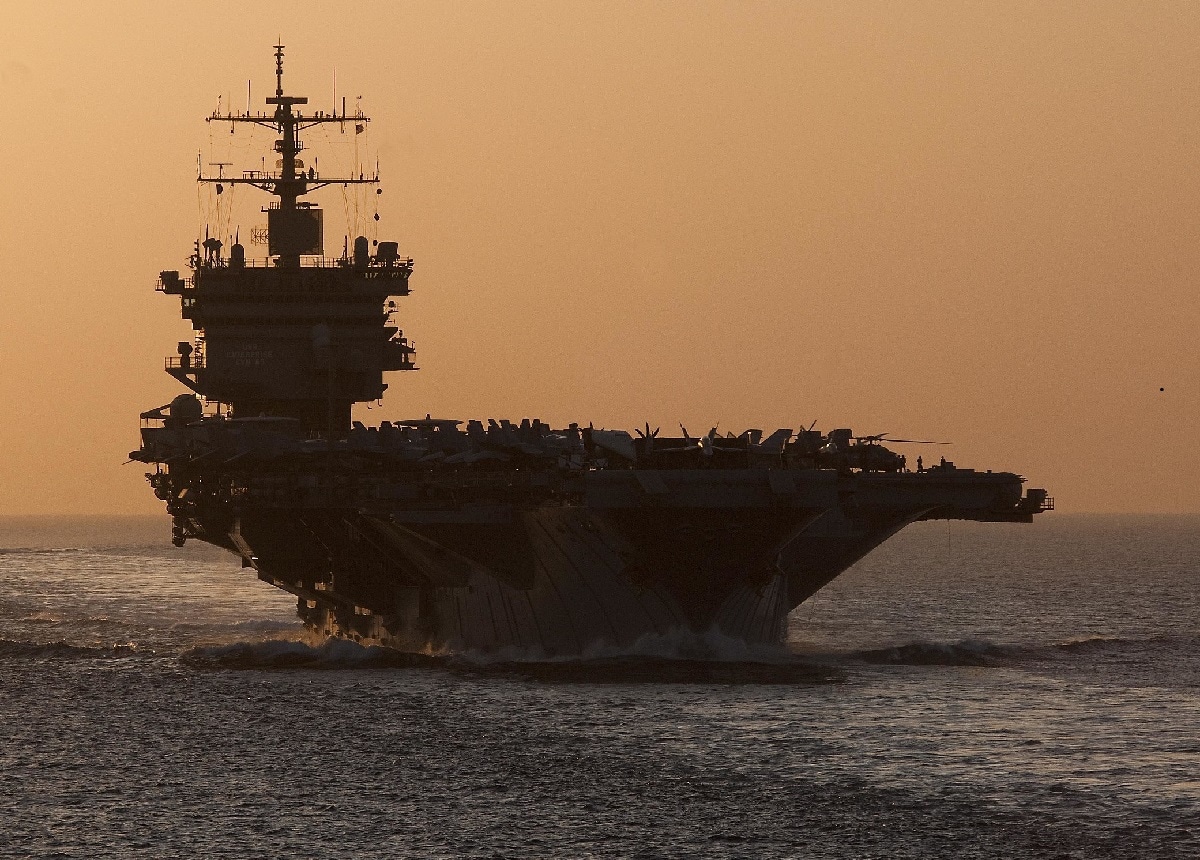 The USS Enterprise (CVN-65)—considered the first nuclear-powered aircraft carrier—was the largest active warship on the planet when it was commissioned by the U.S. Navy in November 1961.

Nicknamed Big E and constructed by Newport News Shipbuilding, the carrier has had several notable moments throughout its service. The most chilling one is undoubtedly USS Enterprise’s 1985 encounter with the Cortes Bank.

In early November of that year, Enterprise began training for her eleventh WESTPAC deployment. One late night, with Captain Robert L. Leuschner, Jr. on the bridge and distracted by what turned out to be a false report of a gunman on board, the carrier collided with Bishop Rock on the Cortes Bank during its flight exercises.

The end result was a damaged outer hull with a gash of sixty feet in length, three of the four massive propellers destroyed, and the port keel was entirely gone.

The warship eventually righted itself and Marines stood guard as divers assessed the heavy damage. The cost of repairs came in at $17 million, and Leuschner was relieved of command in January 1986 as a direct result of the accident.

However, other U.S. Navy ships have not been so lucky with similar collisions.

For example, in January 2005, the USS San Francisco, cruising at more than thirty knots, crashed into an undersea mountain. It appeared that the navigational charts that were often utilized by San Francisco’s crew failed to reveal a seamount that was protruding from the floor of the ocean.

“The ship’s crew were thrown about, some over distances of twenty feet, and the majority of the one hundred thirty-seven-member crew suffered one injury or another—including one that would later prove fatal,” writes Popular Mechanics.

“Further inspection would explain what happened, and reveal that the submarine’s bow looked like a crushed soda can. USS San Francisco had run into an undersea mountain,” the site added.

Despite the head-on crash at a depth of more than five hundred feet and at a speed of more than thirty miles an hour, “the San Francisco didn’t sink, nor did it experience a reactor malfunction. Even more incredibly, the submarine was able to move under its own power back to port on the island of Guam.”

The lives that were saved from this incident could be directly traced back to what occurred in 1963, when the nuclear submarine USS Thresher was deemed to be lost during tests in the Atlantic Ocean.

What became increasingly clear during the investigation was that the ballast-blowing measures meant to surface the submarine in an emergency had largely failed. With that important information, the Navy created the SUBSAFE program.

“The goal was to ensure that, no matter what the emergency, a U.S. Navy submarine’s hull would maintain structural integrity under pressure and the sub would at least be able to surface,” the site wrote.