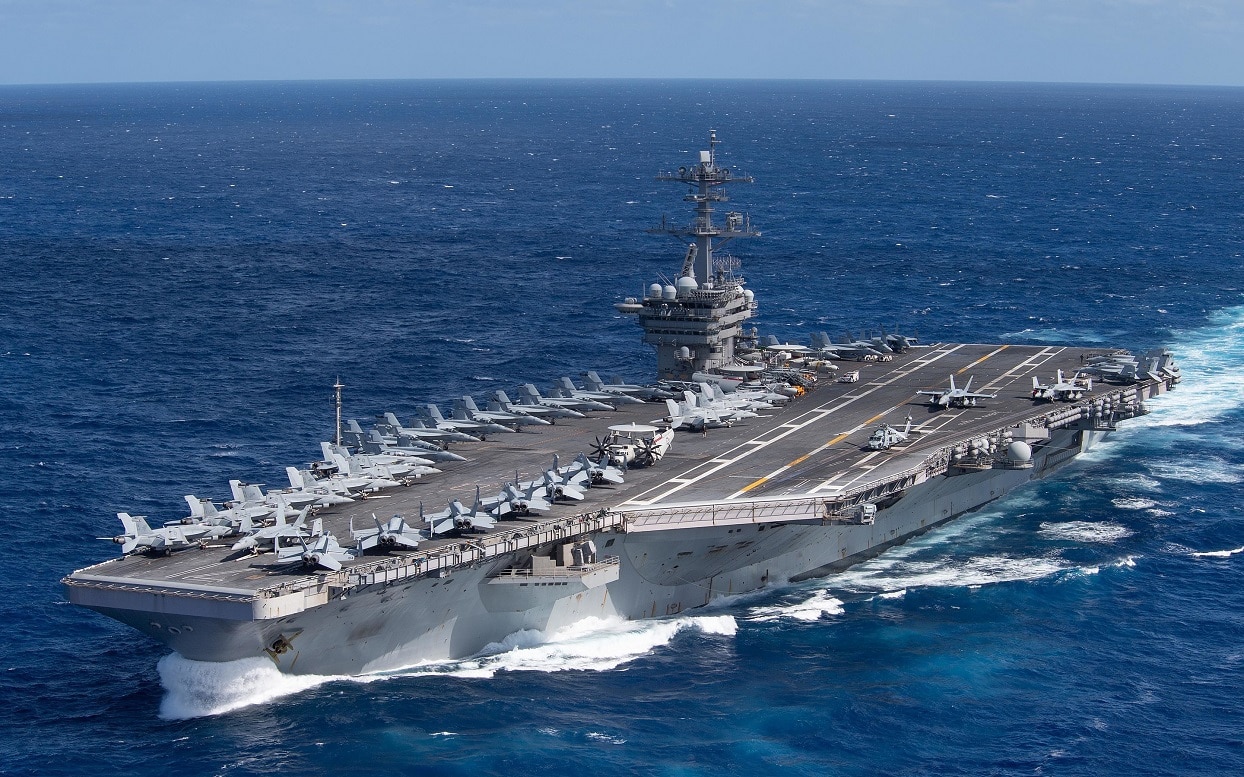 In March 2015, one of the largest nuclear-powered warships in the world was “sunk” by one of the smallest.

The Saphir, a French nuclear attack submarine, reportedly penetrated the defenses of the aircraft carrier U.S.S. Theodore Roosevelt and scored simulated torpedo hits on her. The incident, originally reported by the French Navy, was later suppressed.

On March 4th, 2015 the French Navy announced in a blog post that the submarine Saphir (“Sapphire”) had simulated stalking and killing the carrier U.S.S. Theodore Roosevelt. Not only was the nuclear-powered aircraft carrier simulated sunk but an unknown number of her escorts. The post was later removed without comment from the blog.

Here’s what the world knows: according to the French navy blog post (saved and reproduced by the RP Defense blog), the exercise between Saphir and the USS Theodore Roosevelt Carrier Strike Group took place before an operational deployment. According to the French navy, the carrier strike group included several Ticonderoga-class guided missile cruisers and Arleigh Burke-class destroyers, and a Los Angeles-class nuclear attack submarine.

The blog post explained that the pre-deployment exercise, which occurred off the coast of Florida, took place in two phases. The first phase involved the Saphir integrated with U.S. Navy forces to locate enemy submarines and pass data on to other friendly anti-submarine warfare assets. The “enemy submarine” in this case may have been the Los Angeles-class nuclear submarine attached to CSG 12.

In the second phase of the exercise, the Saphir switched sides and became part of the enemy force. The French nuclear submarine was teamed up with U.S. Navy P-3C Orion and P-8 Poseidons. Saphir was to locate the Roosevelt and get into position to sink her. As the exercise scenario degenerated into a shooting war, Saphir was given permission to attack. The submarine reportedly “sank” Roosevelt and “most” of its escorts.

The French Navy’s blog post was announced on Twitter on March 4th, but was quickly deleted. Several defense outlets picked up on the deletion, and the state-sponsored RT (Russia Today) crowed that a “major vulnerability” had allowed Saphir to penetrate Roosevelt’s screen. That was pure speculation, as the original French Navy post does not mention any such vulnerability.

Nevertheless, the incident appears to have actually happened. The most likely explanation for the deletion of the blog post was that it was simply embarrassing to a major French ally.

Saphir is the second of six Rubis-class nuclear attack submarines built for the French Navy. Rubis is the first generation of French nuclear attack submarines—while the French Navy has had nuclear-powered ballistic missile submarines since the mid-60s, French attack submarines were conventionally powered until the early 1980s. At 2,630 tons submerged and 241 feet long the Rubis class may also be the smallest nuclear combatants ever put to sea. Each submarine has a crew of just 70 and is driven by one K48 pressurized water reactor to a speed of 25 knots underwater. The Rubis subs each have four bow torpedo tubes equipped with F17 Mod 2 torpedoes and MM39 Exocet anti-ship missiles.

How did such a tiny submarine kill a ship almost fifty times larger than itself? First of all, we don’t know the rules of engagement of the exercise. Were the Roosevelt’s escorts using all of their anti-submarine warfare sensors? Was there any prohibition or curb on their use, or were any of them declared inoperative for the purposes of the exercise?

Second, it’s important to remember that “sunk” is in quotation marks for a reason. The French F17 torpedo has a 551 pound HBX-3 high explosive warhead. It can also only fire a salvo of four torpedoes at a time, due to having only four torpedo tubes. A 551 pound torpedo warhead would probably not sink a Ticonderoga or Burke-class escort, and though it would undoubtedly damage, it would definitely not sink a Nimitz-class supercarrier. Also, given a screen of four escort ships and Roosevelt’s onboard anti-submarine warfare helicopters, a single salvo of four torpedoes was all Saphir was going to get before it was forced to withdraw.

Provided Saphir targeted Roosevelt and three of her escorts, it would have damaged four ships—not sunk them. Although the distinction is less important when it comes to the escorts, which might have been knocked out of action, with just one torpedo in her Roosevelt would have likely still been capable of air operations.

The U.S. Navy’s anti-submarine warfare skills have deteriorated greatly since the end of the Cold War, and particularly since 9/11. The emphasis on land wars has directed the Navy’s energies—and budget—elsewhere. Still, as the Chinese Navy continues to grow and the Russian Navy is used more aggressively in the Mediterranean and Baltic Seas, improving ASW is becoming a well-deserved priority. The “sinking” of the Theodore Roosevelt may have been a blow to pride, but it was also an important wakeup call. The next time a foreign submarine stalks a U.S. Navy carrier with nearly six thousand people on board, it could be the real thing.