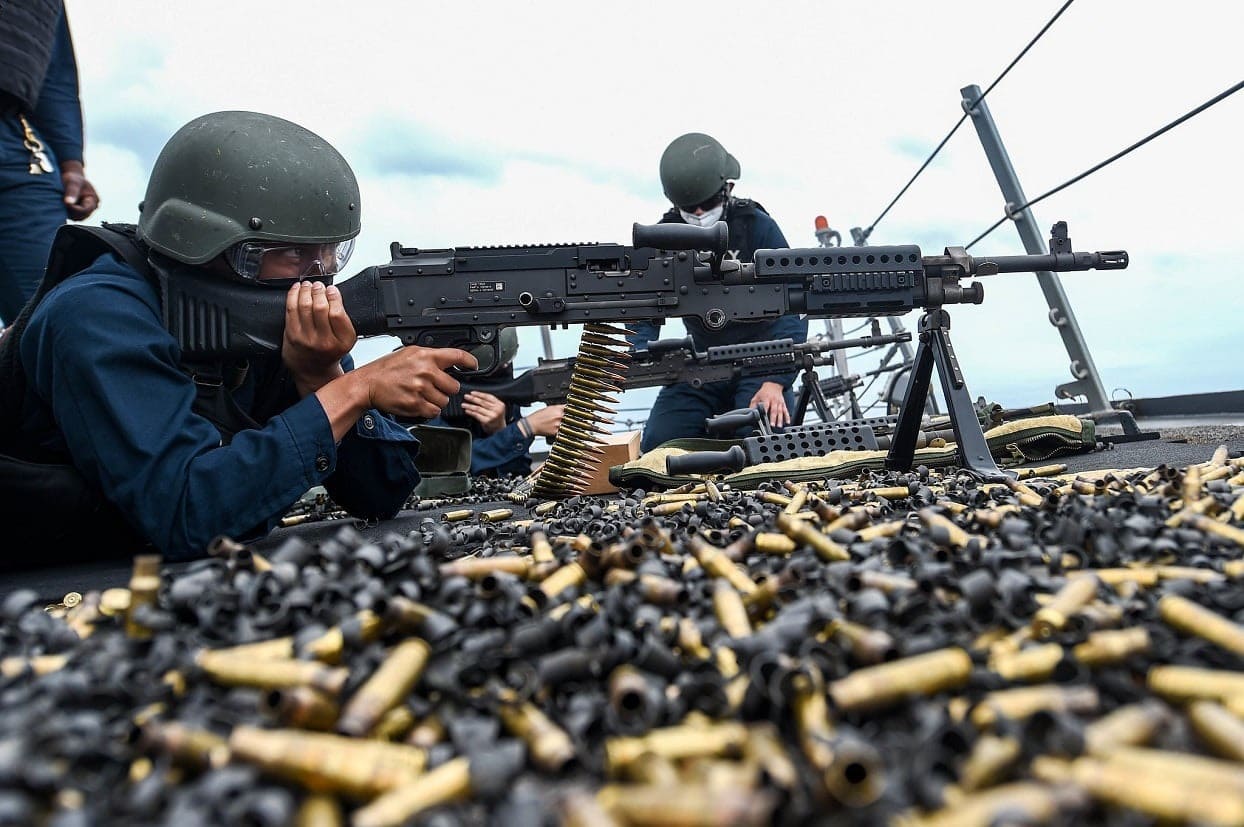 Iwo Jima was one of the bloodiest battles of the Pacific War. The assault by U.S. Marines in February 1945 on the small island—just eight square miles of volcanic rock—cost the United States more than 25,000 casualties. The Japanese garrison, more than 20,000 strong, fought and died virtually to the last man.

Is this a guide for how Japan can stop China?

There are lessons to be learned from the Pacific War, says Yoshiaki Nakagawa, a retired lieutenant general the Japanese Self Defense Force. To be clear, Nakagawa is not calling for Japanese soldiers to again launch suicidal banzai charges. But he does point out how the Pacific War proved that storming a defended island requires an attacker to commit vastly more resources than the defender.

Nakagawa’s analysis is part of a RAND 2017 report titled “The U.S.-Japan Alliance and Deterring Gray Zone Coercion in the Maritime, Cyber, and Space Domains.” Written by U.S. and Japanese researchers, the study examined Chinese “gray zone” warfare, or actions meant to coerce the United States and Japan while not triggering a war.” These range from fishing boats and maritime police vessels entering disputed Japanese waters, to cyberattacks, to high-profile space launches.

The report concluded that there are strategies that the United States and Japan can pursue to stop or deter Chinese provocations. Among them are Nakagawa’s contention that Japanese ground troops can deter China from the Ryukyu (Nansei in Japan) and Senkaku islands, which are owned by Japan but claimed by China.

“Through the emplacement of an appropriately dug-in and well-provisioned defending force, the Japanese Imperial Army determined that it could force its U.S. adversary to expend between three and five times the number of forces Japan had deployed in order to occupy and use the islands,” who Nakagawa, who notes the Japanese Ground Self Defense Forces have taken this lesson to heart.

Japanese troops armed with antiship missiles can foil a Chinese landing, or fight a delaying action to render the island unusable until help arrives. Assuming the Japanese navy and air force can secure control of the waters around an island, Japanese ground troops can retake it. If the provocation is small, such as “armed fishermen” planting a flag on an island, the Japanese coast guard—backed if needed by Japanese soldiers—can deal with it.

Japan already has one airborne brigade, a battalion-sized special forces group, and is working on a rapid-reaction regiment equipped with air-transportable armored vehicles. A planned 3,400-strong amphibious assault brigade will have sufficient amphibious lift to move 2,000 infantry and their equipment. Guard units totaling 500 to 800 men, armed with antiship and antiaircraft missiles, are also being stationed in the Ryukyus. According to Nakagawa:

Given the presence of deployed JGSDF forces, together with the standing up of an amphibious assault brigade, an adversary looking to invade an important area of the Nansei Islands (for example, Miyakojima) must be able to mobilize 3,000-10,000 amphibious troops or more to overcome the advantages of dug-in defenders. . . . The size of the invading units as measured by vessel volume will be about 60,000-200,000 tons, which represents a substantial set of logistical and lift requirements for the invading side. If the deployment of a rapid-reaction regiment to the Nansei Islands can be completed before enemy forces arrive, the level of invading troops required by the adversary will be even greater.

Nakagawa concedes a few problems with this approach. Japan would need air and naval control around the island to move troops, which in turn might require U.S. muscle. There are Japanese civilians on the island that would need to be protected, supplied and possibly evacuated. And a 500-strong garrison and a 3,400-strong amphibious brigade isn’t much of a defense against Chinese invasion, or much of an amphibious counterattack force to retake lost islands.

Nonetheless, Nakagawa hits on the key point: an amphibious assault against an island defended even by a small number of well-armed defenders with long-range weapons is difficult, which is one reason why the U.S. Navy and Marine Corps are worried about their ability to conduct invasions. A Japanese garrison could either deter or repel provocations by irregular Chinese forces. Or, their presence would force China to mount a large-scale military invasion, which would trigger the U.S. defense treaty with Japan, and would also force China to openly use force instead of gray warfare.

On the other hand, basing a strategy on Japan’s World War II experience is a mixed bag. Leaving aside how the symbolism of the Pacific War will play out in China—which still remembers Japanese atrocities—Imperial Japan’s strategy could hardly be called a success.

It is a true that Japan forced the United States to commit huge ground, air and naval resources to bloody assaults on islands like Tarawa and Iwo Jima. But Japan’s original strategy in 1941 had been to create a defensive system of island outposts and airbases, which would tie down U.S. forces while the Japanese fleet and long-range bombers rushed to the scene to destroy the invaders. That strategy failed. Once the Americans had worn down the Japanese fleet and airpower, and the islands were cut off, there was no escape. The garrison was doomed, and the outcome was merely a question of how long the battle and how swollen the body count.

Japan may repeat this strategy, but they will hardly desire to emulate the outcome.