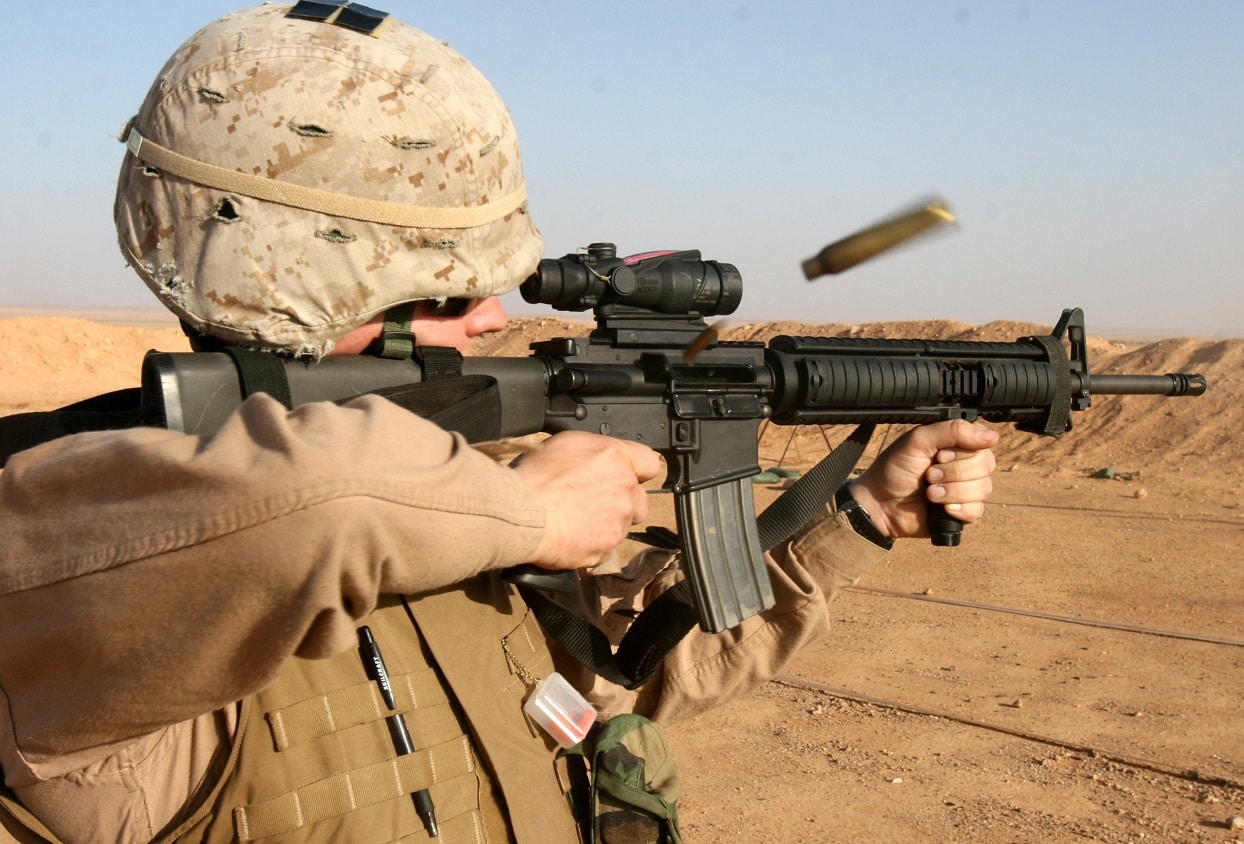 In Part One of this series, we discussed how the U.S. Army came to dump the M14 battle rifle for the M16 assault rifle. The M16 promised light weight and greater lethality, but was it all it was cracked up to be? In this segment we follow the rifle to Vietnam, where the weapon developed a reputation for being unreliable–a reputation it didn’t entirely deserve.

As the U.S. Military began a major commitment to the conflict in Vietnam it began issuing a new weapon to U.S. Army and Marine Corps infantry units. Developed by Armalite and manufactured by legendary gunmaker Colt, the M16 assault rifle was smaller and lighter than its predecessor, the relatively new M14 battle rifle. The M16, used by U.S. Special Forces and the South Vietnamese Army troops they advised, gained glowing reviews in the areas of usability and lethality. The Army and Air Force purchased 104,000 of the rifles in November 1963.

As U.S. Army ground forces began to stream into Vietnam their infantrymen were re-equipped with M16s. Units such as the 1st Cavalry Division, 173rd Airborne Brigade, and the 101st Airborne Division took the M16 on its first large scale deployment with U.S. forces. Despite wariness of the M16 with its plastic parts replacing the all wood and steel M14, the new rifle won over many skeptics and the Army and Marines ordered another 419,277 rifles in 1966.

In the summer of 1966 rumors began to filter out of Vietnam of problems with the rifle. The rumors included weapons failing to feed, failing to fire, and failing to extract. As the year wore on complaints piled up. In the first week of October, 1966, the Commanding Officer of the 1st Battalion, 2nd Infantry, 1st Infantry Division reported his troops had many problems with the new XM16E1 rifles, “to the extent that confidence has been degraded.”

The commanding officer of US Army Vietnam, General William Westmoreland, requested a technical assistance team visit units in the field equipped with the M16, a visit that lasted six weeks. One of Colt’s experts, a decorated U.S. Army veteran, returned to state he had “never seen equipment with such poor maintenance.” He reported that many enlisted troops never maintained their rifles, had never been taught to maintain the rifles, and had never even seen the M16 until Vietnam. Many believed a rumor—some say started by Colt itself—that the rifles did not need cleaning. Cleaning supplies for grunts in the field were limited. As a result, many of the rifles were in appalling condition.

Meanwhile, in 1963 the Army had made a fateful decision: it switched from extruded IMR 4475 gunpowder to the ball-shaped WC 846 powder. WC 846 lowered chamber pressure and increased velocity, both good things, but as a trade-off burned dirtier, producing more carbon buildup, and increased the M16’s rate of fire.

Simultaneously, another issue brewed that would contribute to the problem. Contrary to the rumor all military firearms need cleaning, as they slowly build up levels of grease, dirt, and carbon in the field. Far from being maintenance-free, the M16 rifle needed maintenance at regular intervals. The M16’s gas impingement operating system diverts hot gunpowder gasses that follow the bullet out of the muzzle through a tube, sending it back into the rifle’s upper receiver. This gas pushes the bolt backward, ejecting the empty brass cartridge, picking up a fresh new cartridge, and cycling the weapon action again. In semi-automatic mode this process repeats itself with each pull of the trigger, while in fully automatic mode it will repeat itself as long as the trigger is held down.

One issue with the gas impingement system is that in addition to hot gasses the tube sends back carbon and other gunpowder residue, which left uncleaned can corrode the corrode the chamber, leading to malfunctions. The hot gases and residue issue worsened with the use of the new propellant and subsequently higher rate of fire, increasing the need for regular cleaning. This issue, combined with the tendency of troops to not clean their weapons, led to frequent malfunctions.

That wasn’t the only problem with the M16. Ammunition corroded quickly in the hot, humid environment of Southeast Asia, and magazine feed lips bent easily, causing feeding problems. The Army had declined to chrome plate the chamber and the rifle suffered chamber corrosion problems as a result. The rifle stock had a tendency to crack. Barrel, bolt carrier group, and other steel parts rusted. Brass ammunition casings were too soft, leading to ripped rims during the extraction process.

The maintenance problem grew increasingly urgent. Units in the field were reporting failure rates of up to 30 percent, automatically reducing the number of infantrymen with working rifles to nearly combat ineffective levels. The malfunctioning rifles were repeatedly blamed for contributing the deaths of soldiers in firefights, and some soldiers and Marines even elected to carry AK-47s instead.

By 1967 Colt and the Army agreed to implement a number of modifications to the rifle to increase reliability. A heavier buffer would slow down the M16’s rate of fire, the plastic stock would be made more rugged by using thicker plastic, and the chamber and barrel would be chrome-plated to resist corrosion. Colt would treat steel parts with a phosphate coating to resist rust and improve aluminum anodization. The first rifles with these changes were in the field by late 1967, with the rest deployed by late 1968.

Against this sluggish schedule, the only thing that soldiers and Marines could immediately do to make their rifles more reliable was to clean them, but as journalist CJ Chivers pointed out, this likely contributed little as the same troops–with the same cleaning habits–reported fewer problems with older M14 rifles. The weapon’s poor reliability rate was largely a function of engineering and cost savings issues baked into the rifle, and only actual hardware improvements increased the reliability of the rifle. 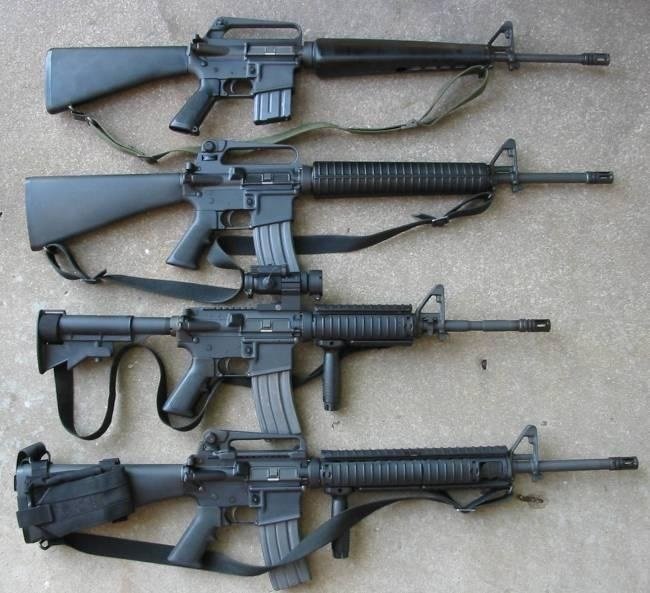 By 1970 the new rifle, designated M16A1 had replaced the older XM16E1 rifles. The most serious problems disappeared, a success, but it had taken four years for the rifle to become as reliable as originally advertised. The M16A1 soldiered on for another fifteen years, and it would be the mid-1980s before the U.S. Army and Marines would embark upon a new round of upgrades to the long-serving rifle. The new weapon, and ammunition, was designed not to take on Viet Cong guerillas in the jungle but Soviet motorized riflemen wearing body armor on the battlefields of Western Europe.