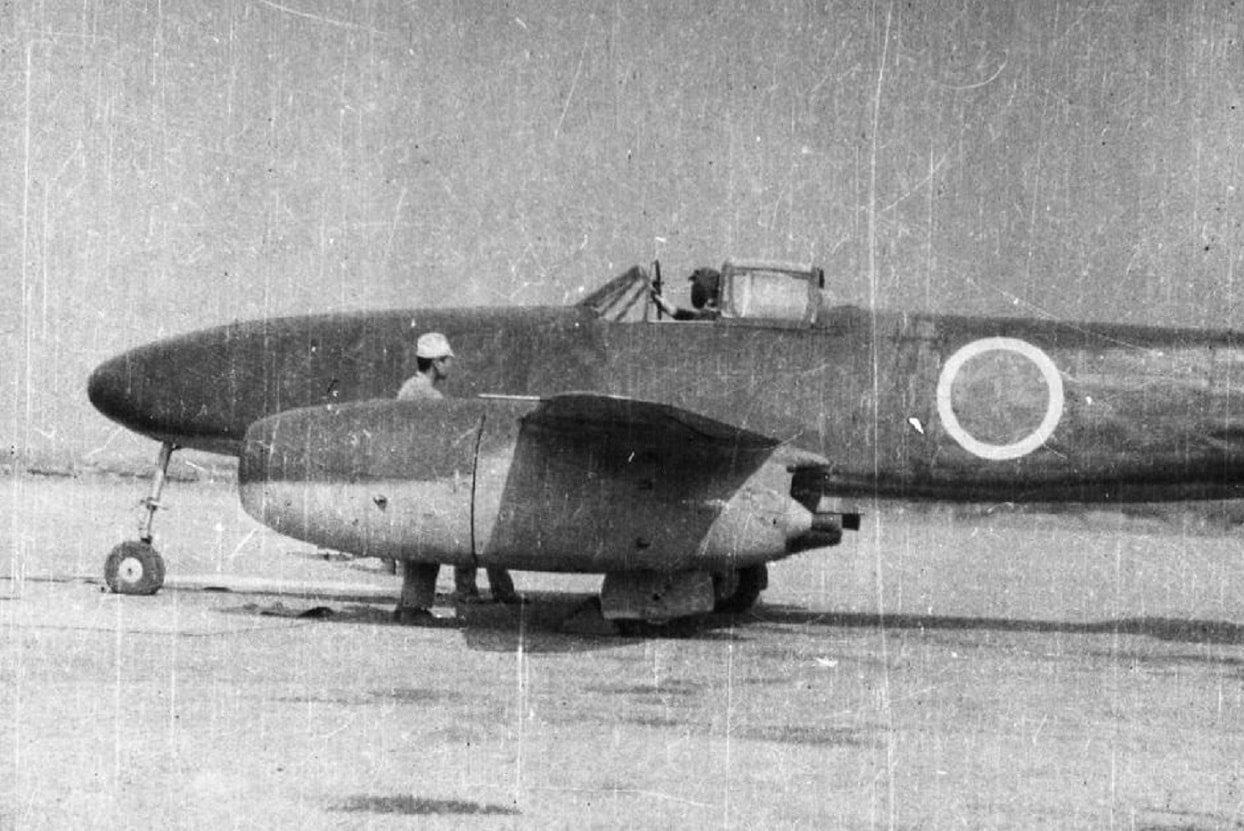 It is a fallacy that Germany was the only nation to develop combat jets in World War II. In truth, while Germany had the most advanced technology, all of the major powers had jet aircraft projects during World War II, including the United States, Britain, Russia, Italy and Japan.

The most well-known Japanese jet—and the only one that saw combat—was the Okha, a rocket-propelled and human-piloted kamikaze. But another Japanese jet actually flew before the war ended, and would have seen combat had it continued: the Nakajima Kikka.

Japanese scientists had actually studied jet engines as far back as the 1930s, despite little government support, and even a turbojet prototype by 1943. Tokyo also knew of German research due to Japanese observers who witnessed early tests of the legendary German Me-262 jet fighter in 1942, But it wasn’t until the summer of 1944, when U.S. B-29 bombers began to pound Japan, that the Japanese Navy asked for the Kokoku Heiki No. 2, or Kikka (“orange blossom”).

That the Kikka resembled an Me-262 is no coincidence—nor was it a matter of simple imitation. Japan’s jet program was heavily derived from German research, but the aid was hardly straightforward. In July 1944, Luftwaffe chief Hermann Goering ordered that Japan be provided with blueprints for the Me-262, the Junkers Jumo 004 and BMW 003 turbojet engines, and even an actual Me-262 aircraft.

Yet the Japanese submarine carrying the plans from Germany to Japan was sunk by U.S. forces, though not before a Japanese envoy got off at Singapore with just a single cutaway drawing of the BMW 003 (arguably just as important as the blueprints for the Me-262, given that early jets were only as good as their unreliable engines). That was enough for Japanese engineers to build the Ne-20 turbojet, an engine that was superior to the homegrown Ne-12 that was originally supposed to power the Kikka.

There were two striking aspects to the Kikka. The most obvious is that it looks like a smaller version of the Me-262, though the similarities were mostly skin-deep. Unlike the German jet, the Kikka had straight instead of swept-back wings, which hampered its performance. The other striking aspect was that it was originally designed as a kamikaze. “In keeping with the shimpu [kamikaze] mission of the aircraft, the initial design had no landing gear and was to be launched from catapult ramps, boosted with RATO [rocket-assisted take off] units,” writes aviation historian Edwin Dyer. “The calculated range was a mere 204km (127 miles) due to the designated engine, the Ne 12, which burned fuel at a rapid rate. At sea level the estimated speed was 639km/h (397mph). A single bomb fixed to the aircraft was the only armament. Another feature was the inclusion of folding wings to allow the aircraft to be hidden in caves and tunnels and protected from bombing attacks.”

By March 1945, the Kikka’s mission changed to a tactical bomber, and an interceptor armed with 30mm cannon. Its engine changed from the Ne-12 turbojet to the Ne-20 (though shortages of key metals reduced the Ne-20’s efficiency). But design was one thing: building jets in 1945 while Japanese aircraft and engine factories were being pounded by U.S. bombers was another. Nonetheless, on August 7, 1945—the day after Hiroshima became the first atomic victim—test pilot Lt. Cdr. Susumu Takaoka made the first (nonkamikaze) flight of a Japanese jet. However, a second flight on August 11, two days after Nagasaki, resulted in a crash landing that damaged the Kikka prototype beyond repair.

Not that it mattered. While plans called for producing almost 500 Kikkas by the end of 1945, those plans were dashed by Japan’s surrender on August 15. Just one aircraft had been completed by war’s end.

How did the Kikka compare to the Me-262s that worried the Allied air forces in 1944–45? The Me-262A1A had a top speed of 540 miles per hour, which left in the dust American pilots flying P-51D Mustangs (maximum speed 437 miles per hour). Plans for the interceptor version of the Kikka called for a maximum speed of 443 miles per hour. In other words, its maximum speed was about the same as a Mustang, and the early jets of World War II were neither known for maneuverability or engine reliability.

The most intriguing question, of course, is whether Japanese jets could have changed the outcome of the Pacific War had they been fielded in time. The best answer is to look at what happened to Germany, which actually produced 1,400 Me-262s, some of which saw combat between November 1944 and May 1945. Though quite disturbing to the Allies, the jets didn’t save the Third Reich. There were too many Allied aircraft, the Anglo-American air forces mounted standing patrols over airfields to catch the Me-262 during their vulnerable take-off and landing runs, and Nazi Germany was being overrun Allied tanks.

With an even worse fuel and raw-materials situation than Germany, Japan probably would have fared no better. The Kikka would have been overwhelmed by the massive U.S. land-based and carrier-based formations that roamed over Japan in the last days of the war. If it had been fielded earlier, perhaps it could have made some difference over battlefields such as the 1944 U.S. invasion of the Philippines. Yet even there, the Kikka’s short range would have rendered it unsuitable for the long-distance flying that characterized the Pacific War. The Kikka might have been relegated to a defensive role over the home islands, intercepting daytime B-29 raids—except the Americans eventually switched the B-29s from day raids to night, when the radar-less Kikka could not fly.

Like its big brother the Me-262, the Kikka was too little, too late.