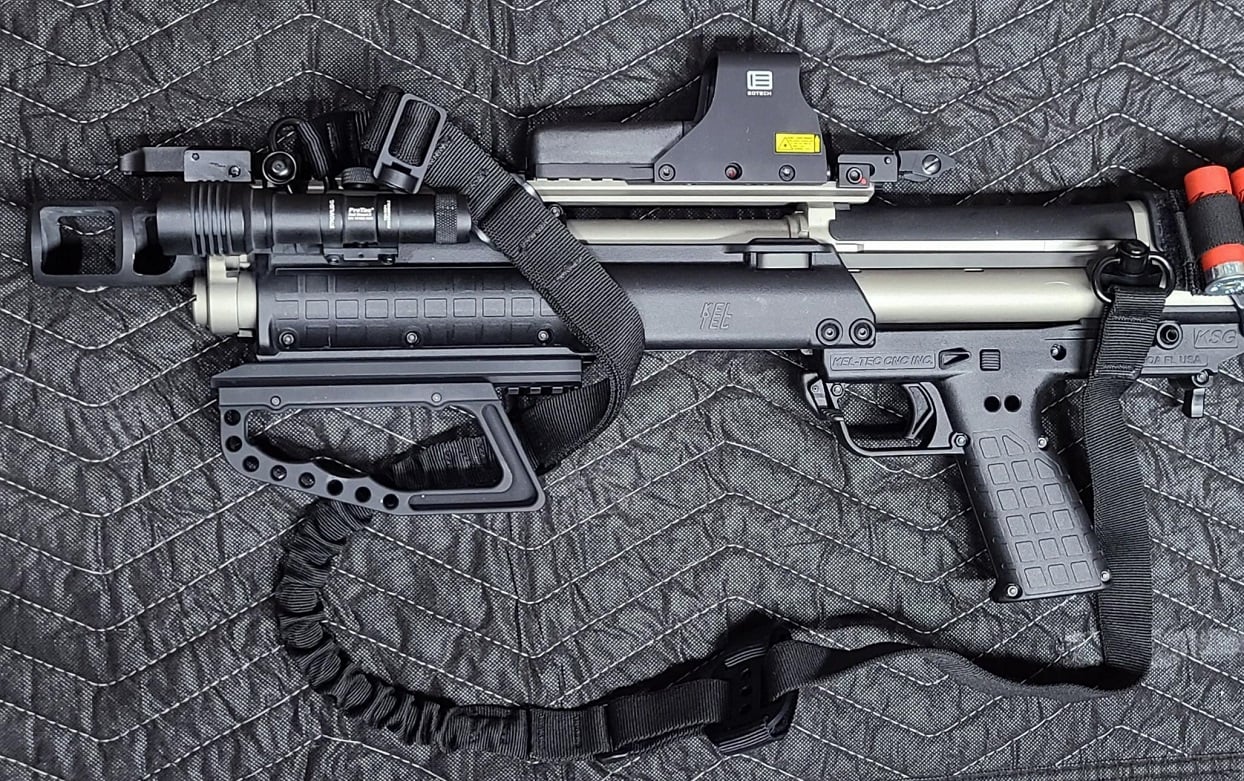 Shotguns are typically not what one would consider high capacity weapons. Enter the Kel-Tec KSG-25.

The Kel-Tec KSG-25 bullpup shotgun however flips conventional wisdom on its head, producing a shotgun that can store an astounding forty-one shots of ammunition internally. The KSG-25’s design makes it by far the largest capacity shotgun on the civilian market and a unique addition to a gun owner’s collection.

Most shotguns have fairly small internal magazines. A conventionally laid out shotgun has a tubular magazine running parallel underneath the barrel that feeds a pump or semi-automatic operating system. The length of the barrel generally restricts the capacity of the magazine, with short barrel shotguns suffering the most. A Mossberg 590 shotgun with 18.5-inch barrel, for example, can only store seven twelve-gauge shells.

Shotguns used for hunting or sport rarely suffer from the magazine capacity issue, but when it comes to defensive purposes more ammunition is always better. The KSG-25 can store an enormous amount of firepower for a single shotgun: up to twenty three-inch shells, 24 2.75 inch shells, or forty 1.62 inch mini-shells. The shotgun can also store one shell in the chamber, for a total of twenty-one, twenty-five, and forty-one shells, respectively.

Two features allow the KSG-25 to pulls off this small miracle. The first is the use of two ammunition tubes instead of one, automatically doubling a shotgun’s typical ammunition reservoir. The second is the use of a bullpup configuration, which allows longer barrels and thus longer tubular magazines.

A bullpup configuration weapon is one whose action is located behind the trigger group, often integrated directly into the buttstock. This maximizes the use of space lengthwise, resulting in a shorter weapon. Another benefit of placing the weapon’s action so far to the rear is the ability to have a longer barrel length. Bullpup weapons were previously the realm of assault rifles, examples of which are the U.K.’s SA80, Israeli Tavor, and the Austrian Steyr AUG.

Most fighting shotguns have a barrel length of eighteen to twenty-four inches. The KSG-25 however, thanks to its bullpup layout, has a barrel 30.5 inches long but an overall length of just 38 inches. By comparison the Mossberg 590 with an 18.5 inch barrel has an overall length of 39.5 inches. The KSG-25 does not actually need a 30.5 inch barrel–few if any shotguns are made with barrels this long–but since the twin feed magazines run underneath the barrel the long barrels mean added firepower. The longer barrel length also adds to the weapon’s muzzle velocity, but in shotguns there is less practical application than in rifles.

The KSG-25’s magazines feed separately into the shotgun, creating another useful feature: the ability to store different loads in the two magazines. The left magazine could be loaded with buckshot rounds, for example, and the right magazine filled with solid slugs. The flick of a magazine selector switch near the loading/ejection port allows the user to go back and forth between the two magazines as needed.

Like like most shotguns the KSG-25 is a manually operated, pump action weapon. The action is cycled by a pair of action bars, and pushing forward chambers a round. The KSG-25’s slide is made of polymer and a Magpul MVG forward vertical grip is installed to give the user a smoother racking experience, as well as hold on against the recoil of heavier rounds.

Early bullpup assault rifles forced left-handed riflemen to shoot right handed, due to the facing of the ejection port to the right. Without modifying his shooting technique a left-handed soldier would get a face full of brass with each pull of the trigger. Kel-Tec’s shotgun, on the other hand, is lefty-friendly. The KSG-25 does not eject shells left or right but instead straight down. The shotgun also has an ambidextrous cross-bolt safety that blocks the action from firing.

The KSG-25 shotgun is a fairly impressive engineering achievement. Manual shotgun technology for the most part plateaued decades ago, and it’s refreshing to see a new take on the pump action shotgun. While not for everyone, the KSG-25 provides unmatched levels of firepower.