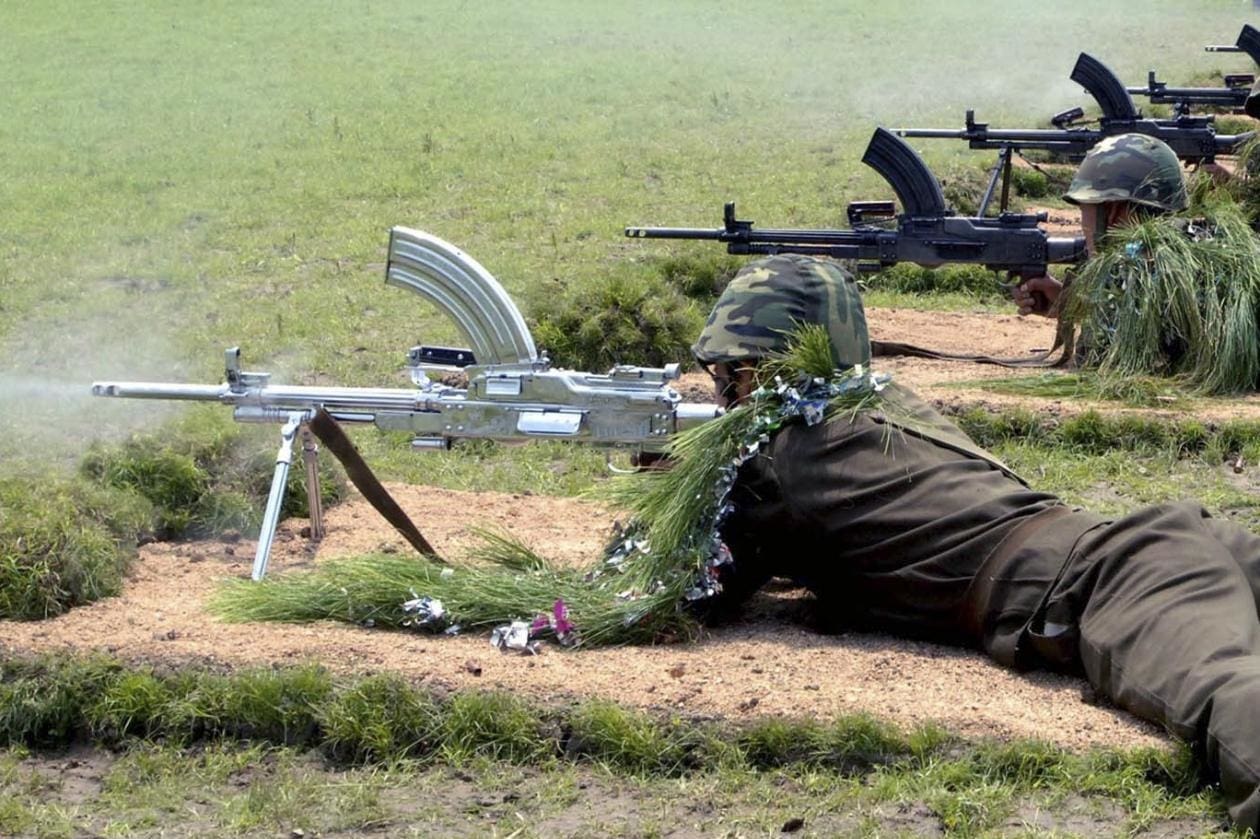 One of the largest armies in the world has adopted one of the most unusual variants of the AK-series of assault rifles. The North Korean People’s Army Type 88 rifle is similar to the Soviet-era AK-74 with one key difference: unusual helical magazines that carry up to five times as many rounds as conventional 30-round magazines.

Over the past sixty years, the Korean People’s Army (KPA) has consistently ranked as one of the largest armed forces in the world. The size and strength of the KPA has fluctuated over time and are not made public but are thought to number today an estimated 1.19 million men and women under arms. The vast majority of the KPA belongs to the ground forces, with the air force and navy a distant second and third.

The KPA was trained and equipped in the late 1940s by the Soviet Union and received considerable support throughout the Cold War. Like most communist bloc countries, North Korea manufactured and fielded its own version of the AK-47. The AK-47 itself became the Type 58 assault rifle, while the improved AKM became the Type 68 rifle. Both rifles used the 7.62×39 round, simplifying logistics considerably and requiring the country to stock only a single common rifle caliber in vast quantities. According to small arms historian Edward Clinton Ezell, the rifles were manufactured at the Number 61 and 65 small arms factories at an annual rate of 150,000 a year.

The latest North Korean assault rifle is the Type 88. The Type 88 is a copy of the AK-74 assault rifle, whose primary advantage over the AK-47 was the adoption of the smaller, lighter 5.45-millimeter round. Exactly when the Type 88 was adopted is not clear, but the type designation, in this case, may indicate the year of adoption—1988. The rifle is now a staple of North Korean military parades and is frequently seen in the hands of North Korean special operations troops and leader Kim Jong Un’s bodyguards.

As a copy of the AK-74, the Type 88’s performance is likely identical to the original Soviet (and now Russian) rifle. The AK-74 is approximately 37.12 inches long, though a North Korean rifle could have a shorter overall buttstock and overall length to suit shorter North Korean soldiers. The lighter recoil and weight of the 5.45-millimeter round over the older 7.62-millimeter round was likely considered enough of an advance to warrant changing calibers. The AK-74 weighs 6.5 pounds and has a rate of fire of approximately 600 to 650 rounds per minute. Unlike previous rifles which were blued steel with wooden furniture, the Type 88 is all black in appearance, likely a purely cosmetic feature meant to give it a modern look like South Korea’s Daewoo K2 and American M4A1 carbine.

The rate of issue for the Type 88 can only be guessed at. Although previous North Korean assault rifles were produced in prodigious quantities, the collapse of the North’s economy in the 1980s probably slowed production. Unlike the Type 58 and Type 68, Pyongyang does not appear to be producing the Type 88 for export. Sufficient numbers of Type 88s have probably been produced for the country’s 200,000 special purpose and special operations forces, including army and navy sniper brigades, airborne units, light infantry brigades and commando units, and perhaps the country’s mechanized infantry units. Given the country’s relative poverty and the diversion of funds to the nuclear program, combat service support and other rear area troops, as well as reservists, almost certainly still carry Type 58 and 68 rifles.

Beginning in 2010, North Korean troops with Type 88 rifles were photographed with a strange new accessory: helical ammunition magazines. The cylindrical magazines were larger the traditional 30-round “banana” magazines and estimated to carry between 100 and 150 rounds. That’s up to five times more firepower than conventional magazines. How reliable this new magazine is anyone’s guess, but one thing is for sure: it will certainly be heavier. A 100 round magazine will add 2 pounds in ammunition alone, and probably another two to three pounds in magazine body, spring, and follower. Suddenly the 6.5 pound Type 88 is a 11-pound weapon—a difficult weapon for a 150-pound soldier to carry.

Why the new magazine? The end of the Cold War shut off the flow of new arms technology to North Korea, and since then the country has sought to maximize the use of existing tech. The KPA, for example, mounts anti-tank guided missiles on main battle tanks to increase their killing range and man-portable surface to air missiles to armored personnel carriers. More firepower is always better. The helical magazine may be a similar attempt to increase firepower for ground troops, especially in the suppressive fire role during infantry attacks. Another new innovation appears to be mating the Type 88 with a bolt action grenade launcher and a new, previously unseen optic.

North Korea’s arms industry is poor and backward but full of surprises. Pyongyang’s infantry and special operations forces make up a disproportionate amount of its armed forces and a major part of its offensive capability, giving it considerable incentive to provide new technology when possible. The Type 88 rifle will probably see further improvements in the coming years, but how much new tech North Korea can sustain across hundreds of thousands of rifles remains to be seen.