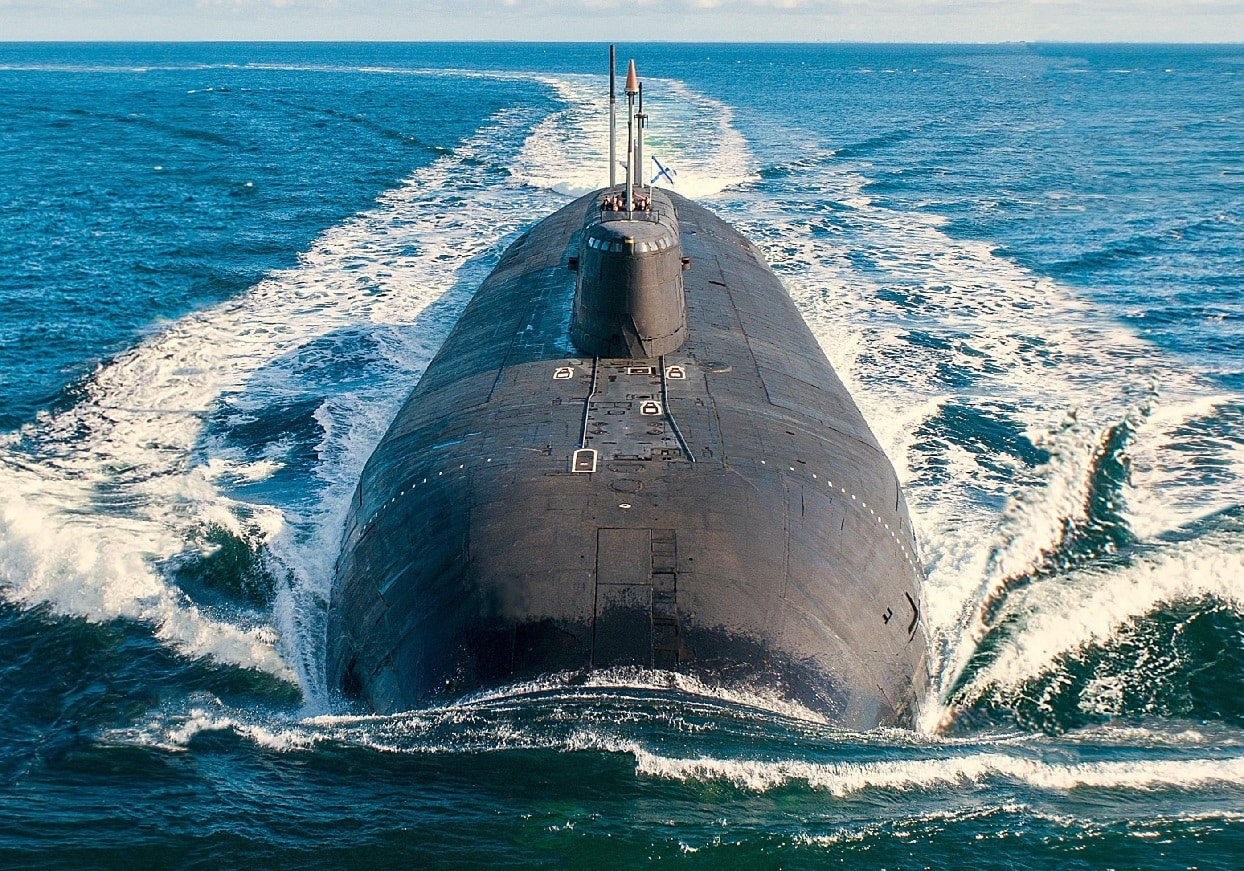 In 2000, a Russian submarine designed to sink aircraft carriers became a victim of its own arsenal. The cruise-missile submarine Kursk suffered a massive explosion and sank after an onboard torpedo accidentally detonated. The Kursk accident was the worst naval disaster suffered by post–Cold War Russia.

The Soviet Union’s greatest adversaries at sea were the aircraft carriers of the U.S. Navy. With their versatile air wings, American carriers could frustrate the Warsaw Pact’s plans wartime plans, doing everything from escorting convoys across the Atlantic to bombing Soviet Northern Fleet bases above the Arctic Circle. They also carried nuclear weapons, making them exceptionally dangerous to the Soviet coastline.

The Soviets’ solution was the construction of the Oscar-class submarines. Some of the largest submarines ever constructed, they displaced measure 506 feet long with a beam of nearly sixty feet—nearly twice that of the Soviet Union’s Alfa-class attack submarines. At 19,400 tons submerged, they were larger than the American Ohio-class ballistic-missile submarines.

They were large for a reason: each Oscar carried two dozen huge P-700 Granit missiles. The P-700 was a large missile designed to kill large ships. The P-700 was thirty-three feet long and nearly three feet wide. Each weighed 15,400 pounds each, most of which was fuel for the ramjet-powered engine which propelled the missile at speeds of Mach 1.6 to a range of 388 miles. The missile packed either a 1,653-pound conventional high explosive warhead, enough to damage an aircraft carrier, or a five-hundred-kiloton nuclear warhead, enough to vaporize a carrier. The missiles would be fed targeting data from the Legenda space surveillance system, which would hunt fast-moving carrier battle groups from orbit.

The missiles were concealed beneath the hull in two rows of twelve, in silos pointed upward at a seventy-degree angle. It was this arsenal that earned them the then-unusual SSGN designation in the West, with the G standing for “guided missile.”

If that weren’t enough, the Oscars had a large complement of torpedoes. Each submarine had four standard-diameter 533-millimeter torpedo tubes that could launch standard homing torpedoes, SS-N-15 “Starfish” antisubmarine missiles or SS-N-16 “Stallion” antiship missiles. It also had two oversized 650-millimeter torpedo tubes for launching Type 65-76A torpedoes against larger ship targets. Together the six tubes were armed with twenty-four torpedoes.

The Oscars needed to be fast to intercept American nuclear-powered aircraft carriers, and that meant they too needed nuclear propulsion. Each was powered by two OK-650 nuclear reactors that together provided 97,990 shipboard horsepower. This accelerated the submarines to up to fifteen knots on the surface and a speedy thirty-three knots underwater.

Twenty Oscar-class submarines were planned, but only thirteen were built before the end of the Cold War and the demise of the Soviet Union. K-141, also known as Kursk, was laid down in March 1992 and commissioned into the Russian Northern Fleet in December 1994.

How the Kursk Accident Occurred

On August 15, 2000, the Kursk was on exercise with major elements of the Russian Northern Fleet, including the aircraft carrier Admiral Kuznetsov and battlecruiser Pyotr Velikiy. Kursk, which was fully loaded with Granit missiles and torpedoes, was scheduled to make a simulated attack on an aircraft carrier. At 11:28 a.m., an underwater explosion was detected followed two minutes later by a second, larger explosion. One Russian account claims that the twenty-eight-thousand-ton battlecruiser Pyotr Velikiy shook from the first explosion, and a Norwegian seismic station recorded both explosions.

Kursk had suffered two massive explosions and sank in 354 feet of water at a twenty-degree vertical angle. An explosion had ripped through the front of the hull, tearing a terrible gash along the upper bow. Still, at least twenty-three of the 118 crew had survived the sinking, as a note penned by one of the ship’s senior officers, Lt. Capt. Dmitri Kolesnikov, indicated. The note was dated exactly two hours after the initial explosion. Rescue efforts by Russian—and later British and Norwegian—teams failed to rescue the survivors.

A Russian inquiry into the accident concluded that one of the Kursk’s Type 65-76A torpedoes had exploded. A faulty weld in a torpedo or damage to a torpedo during movement had caused it to leak hydrogen peroxide. Like many torpedoes, the Type 65 used hydrogen peroxide as an underwater fuel. Unfortunately, hydrogen peroxide becomes explosive when it comes into contact with a catalyst, such as organic compounds or fire. A similar accident is thought to have sank HMS Sidon, a Royal Navy submarine, in 1955.

Conspiracy theories regarding the sinking of the Kursk are rife on the Russian Internet. Many allege that nearby American attack submarines sank the Kursk with Mark 48 torpedoes. While technically possible (in absence of the evidence of an internal torpedo explosion) there is no remotely plausible motive for such an attack during a period of good U.S.-Russian relations. Why attack the Kursk? Why was only the Kursk sunk, and not the Kuznetsov and Pyotr Velikiy? Why would the Russian government cover up the attack?

In the end, the sinking of the Kursk appears to have been caused by a simple, freak accident of chemistry. The tragedy only reinforces how dangerous life aboard a submarine really is, and how important safety is in the underwater realm. Finally, the rush to conspiracy is a warning that, had this incident occurred during a genuine crisis, such an accident could cause a dangerous escalation that could lead to war.