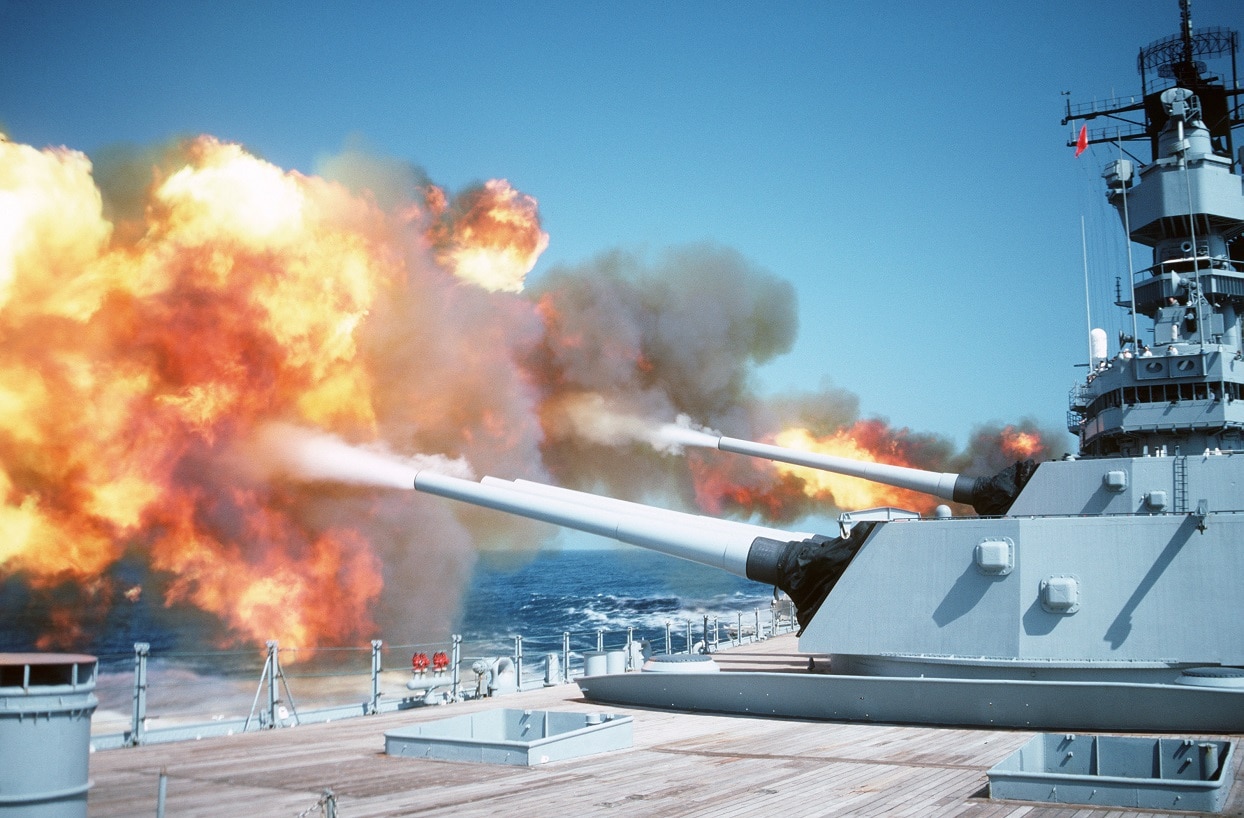 The No. 1, No. 2 and No. 3 Mark 7 16-inch/50-caliber gun turrets of the battleship USS IOWA (BB 61) are fired to starboard during a main gunnery exercise. Second view in a series of three.

It’s 1988. World War Three has begun, with the armies of the Soviet Union and the rest of the Warsaw Pact pouring over the Inter-German Border. Their destination: the Rhine River and beyond, dealing NATO a knockout blow that will end the war.

Meanwhile at sea, an equally titanic battle is about to take place. A Soviet Kirov-class battlecruiser, attempting to intercept a U.S. Navy carrier battle group, is intercepted by the battleship USS Iowa. The biggest ship-against-ship battle since World War Two is about to begin. Who wins?

Built in the late 1980s, the Kirov-class battlecruisers were designed—like much of the Soviet navy at the time—to neutralize American carrier battle groups during warfare. American aircraft carriers were a threat to not only the Soviet mainland but also Moscow’s nuclear missile submarines, and were to be taken out as quickly as possible. A secondary mission of the Kirov class was as commerce raider, designed to cut the flow of American and Canadian ground reinforcements to the battleground in Europe.

The Kirov class were the largest surface warships built since the end of World War II. Each displaced twenty-four thousand tons and measured 826 feet long—nearly as long as an aircraft carrier. Nuclear powered, they could cruise indefinitely at speeds of up to thirty-two knots.

The purpose of the battlecruisers was to attack, and they were well suited for the task. Each carried twenty enormous P-700 Granit antiship missiles. Each, a Granit missile weighed more than fifteen thousand pounds. This was enough to include 1,653-pound high explosive warhead, enough fuel to give it a range of three hundred miles at Mach 2.5, and a both inertial and active radar guidance. Initial targeting data would be provided by the space-based Legenda satellite targeting system, shore-based aircraft, shipboard helicopters or the battlecruiser itself.

Granit was unique among Cold War–era antiship missiles in having an early networking capability. One missile per salvo rises higher than the rest, providing radar targeting information to the rest of the missiles though a network. If that missile was shot down, another would rise to take its place.

The Kirov cruisers were also designed to be self sufficient in anti-air weapons, the overall armament forming a layered defense system. Each carried 96 S-300F long-range surface to air missiles, a naval adaptation of the land-based S-300 system. The ships also carried 192 3K95 short-range surface-to-air missiles based on the Tor, and forty 4K33 missiles based on the Osa. As a last resort, the ships had six AK-630 close-in weapon systems equipped with thirty-millimeter gatling guns.

Built in the 1940s, the Iowa-class battleships were designed to be fast fleet battleships, capable of chasing down and engaging enemy battleships such as the famed Yamato class of the Imperial Japanese Navy. Although the Iowas never engaged another battleship, they provided naval gunfire support for U.S. ground forces during World War, the Korean War, Vietnam, and off the coast of Lebanon in 1983.

The Iowa’s main armament consisted of three massive gun turrets, each housing three sixteen-inch guns. Each gun could heave a one thousand nine hundred pound armor-piercing shell to a range of twenty miles. The guns could make quick work of any modern warship, except for perhaps another battleship—but they have to get the target in range first.

The Iowa ships were heavily armored, as battleships should be, with just over a foot of steel protection at the waterline. Bulkheads were protected by eleven inches of steel, and the main guns had nearly twenty inches of steel armor. The ships were powered by four steam turbines, giving them a top speed of 32.5 knots.

In the early 1980 all four battleships—Iowa, New Jersey, Missouri and Wisconsin—were returned to service and a number of upgrades were performed. Four of the ten dual five-inch gun mounts were removed, and it in their place sixteen Harpoon antiship missiles were installed. First deployed in 1977, the turbojet-powered, radar-guided anti-ship missiles pack a powerful 488-pound warhead. In addition to the Harpoons the Iowa class were fitted with thirty-two Tomahawk cruise missiles and four Phalanx CIWS close-in weapons systems.

Back to our duel. In our scenario, let’s assume that each ship knows the location of the other at three hundred miles. At this range, the Iowa class is at a disadvantage: its longest range weapons, the thirty-two Tomahawk missiles, are land attack missiles and useless against the Kirov.

Kirov, on the other hand, launches all twenty of its Granit missiles. . . and then retreats. The battlecruiser has used up its entire complement of offensive weapons on a single massive blow and has nothing substantial left to continue the fight with. (While it still has a pair of 130-millimeter dual-purpose guns, it would be suicidal to get in close enough to use them, given Iowa’s overwhelming gun armament.)

Two of the Granit missiles fail to launch, or malfunction and fall into the sea, leaving eighteen streaking towards the American battleship. Iowa’s deficiency in air defense armament means that it has only two Phalanx CIWS guns to shoot down the Granits. Its SLQ-32 active radar jammers and Mark 36 SRBOC chaff launchers attempt to spoof the Granit’s active radar guidance systems.

It’s impossible to say how many of the eighteen remaining missiles would have gotten past Iowa’s Phalanx Gatling guns, radar jamming, and chaff dispersal. For the sake of the scenario, let’s assume nine missiles breach Iowa’s defenses. The mighty battleship’s armor was formidable, designed to shrug off sixteen-inch armor-piercing rounds, so it’s likely it would fare pretty well against a Mach 1.6 missile with a simple 1.5 ton high explosive warhead. The Iowa’s main guns were also heavily armored, as were the magazines and the engine spaces.

Iowa would sustain damage, but how much? Let’s assume two of the main gun turrets are knocked out of action, but one turret is still functional and the engines are undamaged. Three sixteen inch guns are still good enough to kill the Kirov but even under ideal circumstances, Iowa is only half a knot faster than the Russian battlecruiser, and at three hundred miles doesn’t have a chance of catching up to it.

If the Iowa were to close the distance with Kirov the odds slightly considerably. Iowa would have to get with sixty-seven miles for it to be able to use its sixteen Harpoon missiles—but even then such as small number of missiles would have a difficult time getting through Kirov’s three-layered air defense network.

In fact, the only range at which Iowa can really win a fight with Kirov is within twenty miles, when the ship’s nine sixteen-inch guns can come into play. At that range, the Kirov is indisputably dead meat, sent quickly to the bottom by the battleship’s big guns. Still, as satisfying as such an engagement would be, it’s hard to see how the Soviets would let an Iowa get that close.

Our 1988 hypothetical engagement is an example of the superiority of guns over missiles in certain scenarios. Guns—at least conventional guns—just don’t have the reach of modern missiles. Certain advances since then—including railgun weaponry and the long-range anti-ship missile (LRASM) could breathe new life into a battleship platform, but that’s an argument for another day.

In 1988 the USS Iowa loses, limping away to fight another day. Still, that’s not all exactly bad news for the Americans: Kirov was forced to expend its missiles against a battleship that didn’t sink, and wasn’t able to fulfill its primary mission of sinking aircraft carriers or savaging NATO’s Atlantic convoys. Kirov returns to her homeport to rearm, but thanks to the carriers that were saved, there may not be a port to go home to.