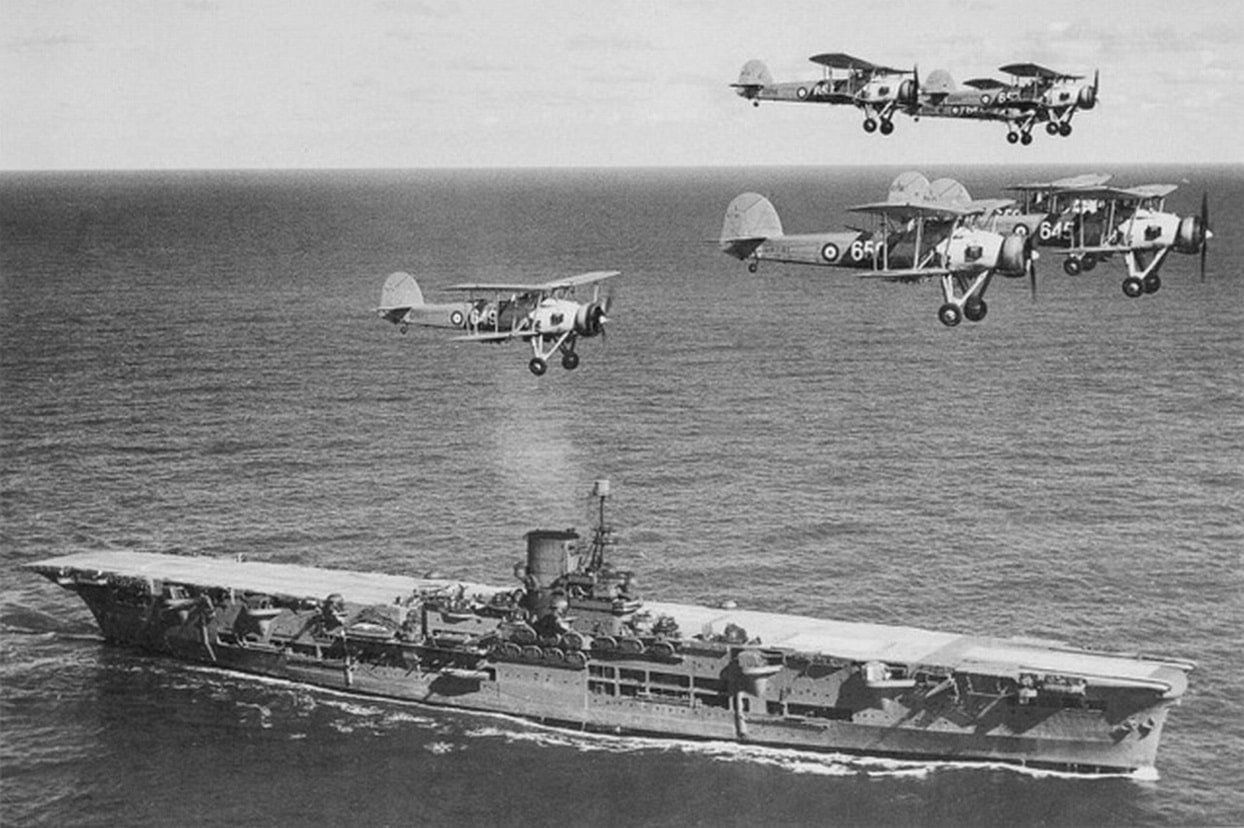 On May 23, 1941, the Battleship Bismarck was on a roll. The largest and most powerful ship in the German Navy, the mighty Bismarck had broken out into the Atlantic Ocean, sunk a Royal Navy battlecruiser, badly damaged a battleship and was poised to add its guns to a naval blockade that threatened to strangle Great Britain.

Ninety-six hours later, heavily damaged, the battleship was on the bottom of the North Atlantic. Bismarck’s swift reversal of fortune was the result of a heroic effort by the Royal Navy to hunt down and destroy the battlewagon, and avenge the more than 1,400 Royal Navy personnel killed in the Denmark Strait.

The German battleship Bismarck was the pride of the Reichsmarine, Nazi Germany’s naval service. Construction began in 1936, and the ship was commissioned in April 1940. It and its sister ship, Tirpitz, were 821 feet long and displaced fifty thousand tons, making them by far the largest warships ever built by Germany. Despite its size, twelve Wagner steam boilers made it capable of a fast thirty knots.

Like any battlewagon, Bismarck’s firepower lay in its main gun batteries. Bismarck had eight fifteen-inch guns in four large turrets, each capable of hurling a 1,800-pound armor-piercing, capped projectile 21.75 miles. This gave it the ability to penetrate 16.5 inches of armor at eleven miles.

The relatively small size of Germany’s World War II navy made it incapable of taking on the British and French navies head-on. Instead, the Kriegsmarine was given a much more limited role, of shepherding invasion fleets and cutting off the flow of commerce to Great Britain. On May 18, 1941, Bismarck and its escort, the heavy cruiser Prinz Eugen, embarked on Operation Rheinübung, a campaign to sink Allied shipping in the North Atlantic and knock Britain out of the war.

On May 24, southwest of Iceland, Bismarck and Prinz Eugen tangled with the battleship H.M.S. Prince of Wales and the aging battlecruiser H.M.S. Hood. Trading armored protection for speed, Hood’s designers had left it dangerously exposed to enemy fire. Hits from the German task force ignited an ammunition fire that raged out of control on Hood. Within ten minutes a titanic explosion shook the Denmark Strait as the fire reached the aft magazine. Hood broke in half and sank, taking 1,418 men with it.

Bismarck, despite its stunning victory, had not emerged from the battle unscathed. Hit three times by Prince of Wales, it lost some of its fuel supply to seawater contamination, sustained damage to its propulsion, and suffered a nine-degree list to port. Its captain, desperate to get away from the site of the battle and a slowly coalescing Royal Navy force eager for revenge, refused to slow down to allow damage control to effect repairs.

Bismarck’s captain was correct. The Royal Navy was assembling a large force to sink it, and indeed had ordered every ship in the area to join in the search to find it. The much larger Royal Navy was able to assemble a force of six battleships and battlecruisers, two aircraft carriers, thirteen cruisers, and twenty-one destroyers to hunt Bismarck. Unfortunately, many of the larger ships were of World War I vintage, and could not catch up with the wounded, but still fast Bismarck.

Although Bismarck outclassed nearly all the heavy capital ships that chased it, naval aviation was another matter. The German task force’s location was betrayed by oil leaking from the battleship and the aircraft carrier H.M.S. Victorious was sent to slow it down. An air strike by six Fairey Fulmar carrier-based fighters and nine Fairey Swordfish carrier torpedo bombers managed a single hit on Bismarck. The torpedo explosion did minor damage, but the evasive maneuvers conducted by Bismarck’s captain to evade the torpedo attack caused even more damage, slowing the mighty battleship to sixteen knots.

Although it was eventually able to get back up to twenty-eight knots, the temporary loss of its speed advantage allowed a Royal Navy task force, Force H, to catch up to it. Established to take the place of the surrendered French Navy in the western Mediterranean, Force H was based at Gibraltar. It consisted of the aircraft carrier H.M.S. Ark Royal, the battlecruiser Renown and a light cruiser.

But Force H had to find it first. British intelligence had decoded some of the Kriegsmarine’s message traffic, which stated that the Bismarck was going to Brest for repairs. Reports from the French resistance that the Luftwaffe was assembling at Brest to provide an air umbrella for the battleship corroborated the report. So did a sighting of the battleship by a U.S. Navy Catalina seaplane that put it a day away from the French port. All of this happened very quickly throughout the morning of May 26.

At 9 p.m. on the twenty-sixth, an initial air strike of Fairey Swordfish torpedo planes was aborted after the strike force mistakenly attacked the light cruiser HMS Sheffield. The bungled attack proved beneficial, however, in that the new torpedo detonators failed to work properly. Had the Swordfishes found their mark, the attack would have been for nothing. The new detonators were swapped out for the older, reliable ones, and a second attack was launched.

The second Swordfish attack correctly located Bismarck. A single torpedo found its target, jamming the ship’s rudder. The mighty battleship was reduced to sailing in circles in the North Atlantic, unable to straighten out and continue onward to Brest. To make matters worse, a combined force of Royal Navy and Polish destroyers made repeated torpedo runs on the ship, exhausting the crew.

Bismarck’s crew proved unable to repair the rudder. At twenty minutes to midnight, Bismarck’s captain radioed German forces in France: “Ship unmaneuverable. We will fight to the last shell. Long live the Führer.”

The next day, May 27, the Royal Navy moved in for the kill. At 8:47 a.m., the battleships H.M.S .Rodney and H.M.S. King George V opened fire on the wounded German battleship, striking it several times. Bismarck returned fire, but its inability to steer and list made accurate return fire nearly impossible. One of Bismarck’s shells landed just sixty feet from Rodney’s bridge, drenching it with water, but the German battleship was unable to damage its assailants in any meaningful way.

Eventually Rodney and King George V defanged the their German counterpart. Turrets A and B were destroyed within the first hour and twenty minutes of the battle, while Turret D was put out of action when a shell exploded inside one of the main gun barrels. The last turret, C, ceased fire ten minutes later, at 9:31 a.m. Bismarck’s main guns were totally out of action.

Still, the fifty-thousand-ton battleship refused to sink. King George V blasted away at a range of 1.5 miles with all ten guns, point-blank range for battleships. The heavy cruisers Norfolk and Dorsetshire joined in the battle. The ship’s superstructure was turned into scrap, and the ship was burning from many fires. Hundreds of crew lay dead or dying, and a pillar of black smoke followed it.

By 10 a.m., Rodney had expended 380 sixteen-inch shells on Bismarck, and King George V 339 rounds of fourteen-inch shells. The secondary 5.5- to 6-inch guns of both battleships, plus the guns of the two heavy cruisers, expended a total of 2,156 shells on the battleship, plus numerous torpedo attacks. While not every shell hit many did, especially after the Bismarck was unable to return fire.

At 10:39 a.m., after two more rounds of torpedo attacks by air and sea, Bismarck finally sank. Its list gradually increased to twenty degrees, then to the point where its port secondary guns were almost submerged. Finally, it capsized to port and sank. Although hundreds of men made it to the water, a U-boat scare sent the Royal Navy ships collecting survivors heading for safety. Of the 2,200 officers and enlisted personnel that manned Bismarck, only 116 survived.

Bismarck’s sinking was an excellent example of combined arms at sea working together to take down a more powerful opponent. No single element of the Royal Navy present at the battle was strong enough to defeat Bismarck singlehandedly, but together a force of aging aircraft carriers and torpedo bombers, twenty-to-thirty-year-old battleships, and more than a dozen scrappy cruisers and destroyers were able to ensure that the mighty German battleship would never reach refuge in France.