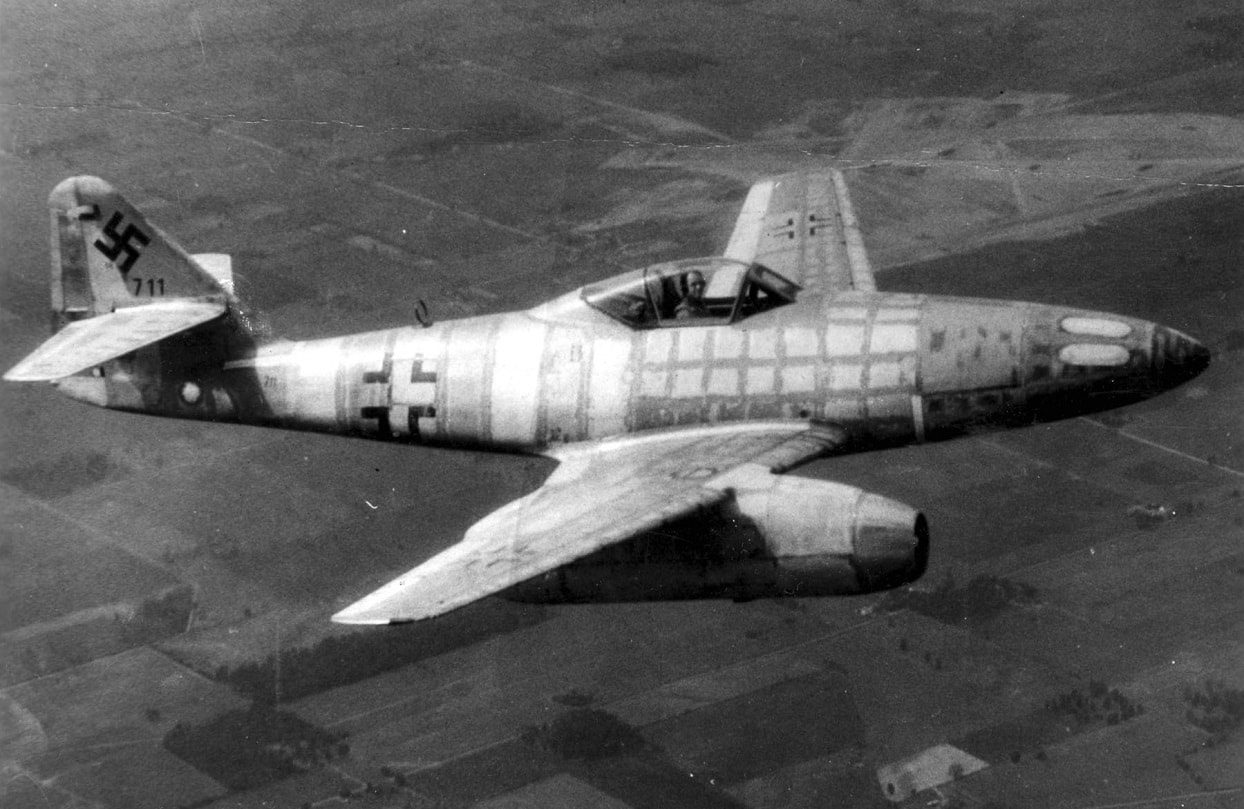 April 7, 1945, should have been just another high-explosive day over Nazi Germany. That morning, as they had done on so many mornings for the past three years, the bomb-laden B-17s and B-24s lumbered into the sky from their airfields in southern England. An armada of 1,300 bombers, snug under the protection of 850 P-47 and P-51 fighters, droned majestically over the North Sea toward their targets in northern Germany. Marked for destruction were oil facilities and arms factories near Hamburg, as well as airfields where the revolutionary Messerschmitt 262 jet fighters were based.

No combat mission over Nazi Germany could ever truly be a “milk run.” Yet the Eighth Air Force had come a long way since the dark days of late 1943, when its raids against Regensburg and Schweinfurt cost 20 percent of the bombing force. By April 1945, only a month away from Hitler’s suicide and the Thousand-Year Reich’s surrender, Germany’s defenses were disintegrating.  The Luftwaffe, crippled by fuel shortages and lack of trained pilots, was only capable of sporadic—albeit still deadly—attacks. German jets outclassed the slower propeller-driven Allied bombers and fighters, but there weren’t many of them. At this stage in the war, the biggest problem for the American and British bomber fleets wasn’t German aircraft, but rather finding fresh cities that hadn’t already been bombed to rubble.

Since the first Flying Fortresses had appeared over Germany in January 1943, the Luftwaffe had thrown everything it could think of to knock down the big American four-engined bombers. Single-engine fighters, twin-engined fighters, bombers converted into fighters, fighters carrying anti-tank guns, aerial rockets, and aerial bombs dropped into the bomber formations. The Luftwaffe was caught in a chicken-and-egg crossfire: to shoot down massed formations of heavy bombers bristling with machine guns, the Germans needed heavily armed and armored fighters. But these clumsy “assault fighters” were easy prey for the nimbler American fighter escorts.

Desperate for a solution, the Nazis turned to another idea. They would ram their fighters into the American bombers.

In the seventy-two years since the first kamikazes crashed into American warships, the concept of the suicide aircraft has been thought of uniquely Japanese. Other pilots had been known to dive their already-crippled aircraft on to their targets, and the Saudi Arabian 9/11 hijackers added their own monstrous legacy. But the idea of entire squadrons of military pilots deliberately plunging into enemy ships seemed alien to the Western mind.

But in the spring day in 1945, it was Nazi pilots—the poster children for white supremacism—launching suicide missions. Sonderkommando (Special Command)  Elbe was a special unit of volunteers that deliberately collided into American bombers.

The pilots would fly fighters stripped of all weapons and armor to make them as fast as possible. “The fighter would then dive at its target, the aiming point being the trailing edge of the bomber’s tail surfaces or the control surfaces of its wing,” writes author Adrian Weir in his book,  “Last Flight of the Luftwaffe. “Rather than risk the aircraft becoming entangled, the propeller was to be used as a circular saw, which would rip apart these areas of the bomber.”

To be clear, while dying for the Fuhrer and dying for the Emperor may have sounded alike, the German concept differed from the Japanese in one crucial respect. Survival was simply not an option for Japanese pilots diving their planes into Allied warships. They were expected to stay at the controls all the way until the end, even though the majority failed to hit their targets. However, Sonderkommando Elbe pilots were supposed to ram their targets and then bail out.

The tactic wasn’t new. Ramming enemy aircraft was not unknown in World War II. Soviet pilots conducted hundreds of taran (ramming) attacks against Luftwaffe bombers and fighters, while Allied fighter downed V-1 “buzz bombs” by inserting their wing under the V-1’s wing and tipping it over. Nonetheless, the odds of these German pilots seeing another dawn were slim. A two-ton Me-109 ramming a fully loaded thirty-three-ton B-17 at four hundred miles per hour was dangerous enough, but especially so when the German pilots were so poorly trained and inexperienced. They also had no ejection seats in those days, which meant sliding back the canopy and bailing out of the cockpit of a crippled aircraft.

Still, the Germans hoped that slamming a massed formation of ram fighters into a U.S. raid would destroy so many bombers that the Americans would suspend their aerial offensive for a while.

On April 7, nearly two hundred Sonderkommando Elbe pilots scrambled into their cockpits and roared into the air. The plan was for Me-262 jets to engage the American escorts and regular Luftwaffe fighters to conduct conventional attacks on the bombers, leaving Sonderkommando Elbe free to hit their targets. Only about 120 ram fighters actually managed to engage the Americans.

Spread over hundreds of square miles of German countryside, a wild melee ensued of fighters dogfighting fighters, fighters shooting at bombers, bombers shooting at fighters (sometimes their own), and fighters ramming bombers. Weir describes one ram attack and the “horrific noise which followed as the blades sank like teeth into the tail and the fighter itself was then thrown against the bomber. The horrific noise had been firstly the vibration as the Daimler-Benz engine continued to turn each of the blades as they cut more deeply, followed a split second later by the noise of the fighter being pulled further on to its shuddering victim.” The German pilot survived.

Weir estimates that the American escorts shot down forty-seven Sonderkommando Elbe fighters, while the bombers accounted for another six. The ram fighters may have destroyed as many as thirteen bombers. By the end of the war, that was a respectable tally for the Luftwaffe. But thirteen out of 1,300 bombers was not going to stop the American onslaught, when the U.S. produced ninety-six thousand aircraft in 1944 alone.

And what of the concept of suicide aircraft? The very idea seems antithetical to democratic Western values. Yet as one Japanese officer pointed out, the odds of a regular Japanese combat pilot surviving in 1944–45 were so low that the kamikaze didn’t seem such an unreasonable idea. In the last year of the war, the Luftwaffe’s poorly trained fighter pilots were also being shot out of the sky at a horrendous rate. Why shouldn’t they take down a bomber before they perished?

Perhaps the best answer is that organized suicide is the ultimate admission of failure in war. Japan and Germany didn’t choose this method out of efficiency or idealism. They did it because they had so botched their war efforts that they couldn’t think of anything better.