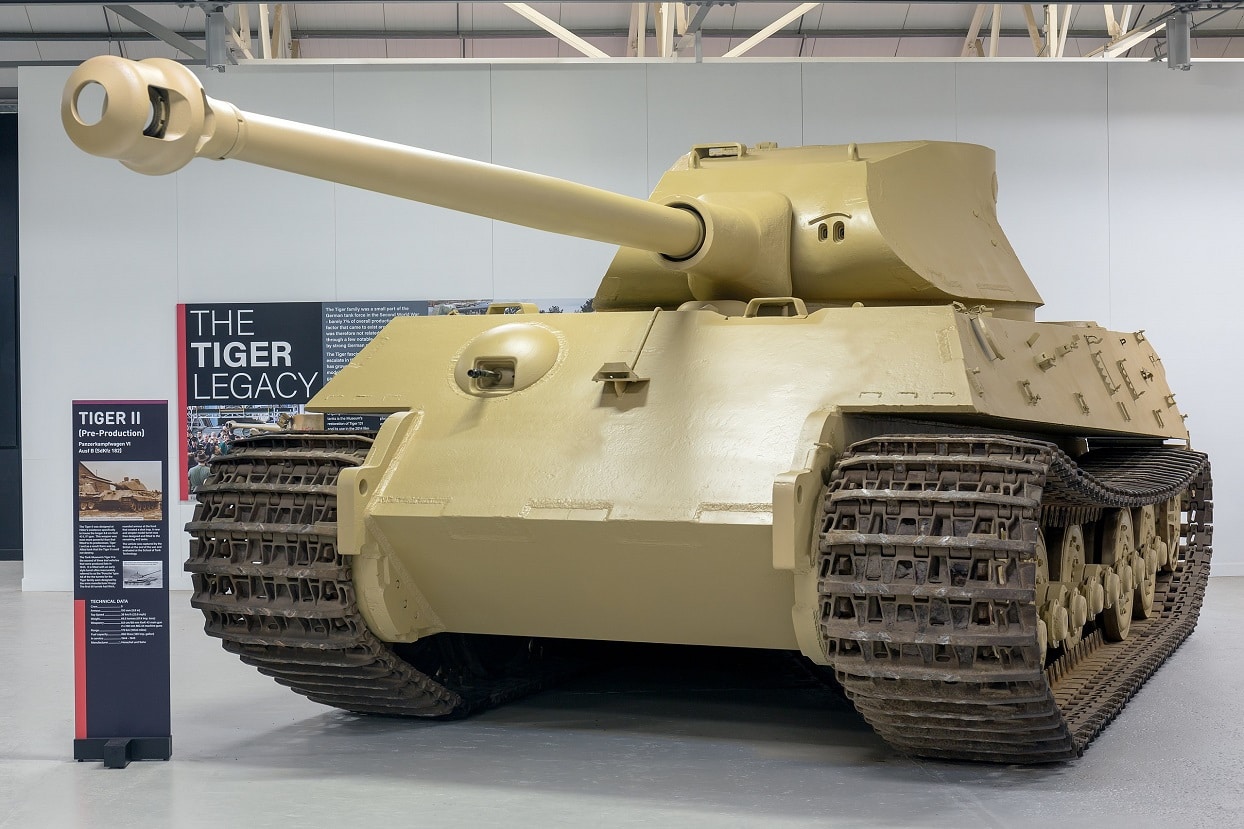 Nazi Germany’s Tiger is arguably the most famous tank of World War II. With its thick armor and devastating 88-millimeter gun, the Mark VI—or Tiger I—soon earned a devastating reputation on the battlefield.

Designed as a breakthrough tank for breaching enemy defenses, and allocated to a handful of special heavy tank battalions, the sixty-ton Tiger I seemed to have it all: firepower, armor and for an early 1940s vehicle that weighed as much as today’s M-1 Abrams, it was fairly agile. With its square, castle-like shape and long cannon, the Tiger I even looked deadly. But Hitler’s generals and weapons designers were not satisfied. With Teutonic perfectionism, they complained that the Tiger I’s KwK 36 gun was not the most powerful version of the 88-millimeter cannon (not that Allied tankers would have noticed the difference). Even before the Tiger I debuted on the battlefield (floundering in the swamps near Leningrad in an ill-advised attack in September 1942), work had begun on a successor.

Enter the Tiger II, or Konigstiger (King Tiger). At seventy-five tons, it was bigger than its predecessor. Its longer-barreled (and thus higher velocity) KwK 43 88-millimeter cannon could penetrate five inches of armor at a range of two kilometers (1.2 miles). With Sherman and T-34 crews having about two inches of frontal armor between them and eternity, no wonder a supersized Tiger must have seemed the devil on treads.

The Tiger II also featured numerous improvements over the Tiger I. The original Tiger had vertical armor, rather than the more effective sloped armor (effectively increasing armor thickness) found on the T-34 and the later German Panther. The King Tiger had well-sloped armor that was six inches thick on the front hull. Its turret could traverse 360 degrees in nineteen seconds, compared to sixty seconds for the Tiger I, which had theoretically allowed a fast-moving Sherman or T-34 to maneuver behind a Tiger I faster than the German tank’s gun could track it.

Like a professional football player, the Tiger II was more agile than it looked. It had a road speed of about twenty-five miles per hour, versus about thirty for the Sherman and T-34. Cross-country speed was about ten miles per hour, versus about twenty miles per hour for the other two tanks. Author Thomas Jentz, the dean of Tiger historians, writes that despite its size, the Tiger II had surprisingly good tactical mobility. Unlike the megalomaniacal 200-ton German Maus, which couldn’t even roll over many European bridges, the King Tiger was a viable design.

Late war Germans tanks like the Tiger and Panther had a reputation for being over-engineered and mechanically finicky. As with any sophisticated weapon, the Tiger II did suffer from reliability issues, especially at the hands of the poorly trained and inexperienced tank drivers of the late war German army. But given a skilled crew and proper logistics support, the Tiger II was fairly reliable, according to Jentz. The problem was that by the time the King Tiger made its combat debut in Normandy in July 1944, the necessities that Nazi Germany most lacked was trained, experienced tank crews and fuel and logistics support.

Which brings us to the question dear to every treadhead: Was the King Tiger a great tank? As with all weapons, the answer is: it depends. In terms of the triad of metrics for tanks—firepower, armor and mobility—the Tiger II was quite impressive. It was probably better than its American rival, the lighter and less heavily armored forty-six-ton American M-26 Pershing. A more interesting question is the King Tiger versus the Soviet IS-2 Stalin tank. There are all sorts of conflicting data and opinions on this duel, though an encounter between IS-2s and King Tigers in August 1944 destroyed or damaged ten tanks on either side. One flaw of the IS-2, whose powerful 122-millimeter gun could theoretically penetrate a King Tiger’s thickly armored turret at one-mile range—was its low rate of fire and limited onboard ammunition supply. Had the war continued until 1946, the King Tiger would probably have met its match in the British Centurion, one of the most successful tanks in history and still used today.

However, the most telling statistic is that while the Soviet Union produced nearly 3,900 IS-2s, Germany built just 492 Tiger IIs. The Soviets built more than 108,000 tanks, and the Americans eighty-eight thousand, because World War II was a contest of production that devoured material at an appalling rate. Less than 500 King Tigers, no matter how powerful, were not going to change the outcome.

Ironically, the King Tiger’s most deadly predator wasn’t other tanks, but Royal Air Force Lancaster bombers. The German army ordered 1,500 Tiger IIs, but RAF raids on manufacturer Henschel’s factories slashed production. An earlier Tiger I cost 250,000 Reichsmarks, two to three times as much as smaller German tanks such as the Panther or Mark IV. Would Germany have been better off with a greater number of lighter tanks, especially the heavier Panther? Given the current American preference for expensive weapons like aircraft carriers and F-35 fighters, this question still resonates.

Weapons are extremely situational items. A tank that functions well in one setting might prove a failure in another. By the time the Tiger II made its combat debut in Normandy in July 1944, Germany was on the defensive. Big tanks like the King Tiger were mobile fortresses if properly sited in ambush positions. But on the attack, advancing down narrow, icy roads as the Tiger II did during the Battle of the Bulge, big, heavy fuel-guzzling tanks could be a liability. One problem with both the Tiger I and II was that they were so big relative to other German tanks, that the only vehicle that could tow a damaged Tiger was another Tiger. As the German armies retreated in the East and West, many of these behemoths were abandoned or blown up by their own crews.

Heavy tanks like the King Tiger proved a dead end. After 1945, nations switched to building main battle tanks that had sufficient firepower and armor to breach enemy defenses, like heavy tanks, while being mobile enough to exploit breakthroughs like medium and light tanks.

The day of the Tiger had passed.