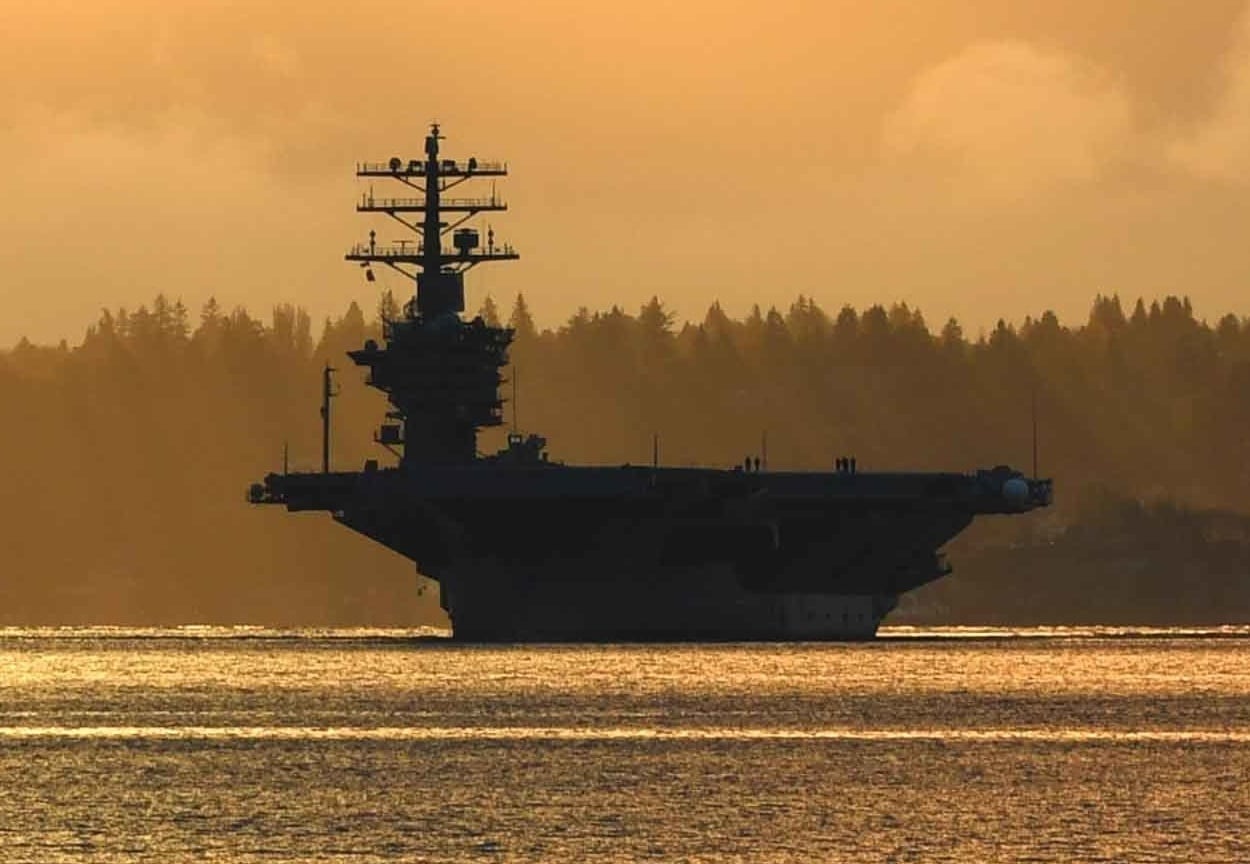 The most successful U.S. Navy carriers of the postwar era all belong to a class named in honor of World War II’s most successful admiral, Chester W. Nimitz. The class’s lead ship, commissioned in 1975, bears the fleet admiral’s name. The Nimitz-class aircraft carriers were, at the time, the largest warships ever constructed. Although superseded by the new Ford class, the ten Nimitz-class aircraft carriers will continue to form the bulk of the Navy’s carrier force for the next twenty to thirty years. Many project a half a century or more.

The story of the Nimitz carriers goes back to the mid-1960s. The U.S. Navy was in the process of spreading nuclear propulsion across the fleet, from submarines to cruisers, and had just commissioned the first nuclear-powered aircraft carrier, Enterprise, in 1961. As older carriers were retired, the Navy had to decide whether to switch over to nuclear power for future ships. Secretary of Defense Robert McNamara was ultimately convinced to proceed with nuclear power on the grounds that nuclear carriers had lower operating costs over their service lifetimes. He ordered the construction of three nuclear-powered carriers.

The result was the Nimitz class. Its first ship was laid down on June 22, 1968. The ship built on the Navy’s prior experience with both conventionally powered supercarriers and the Enterprise. The Nimitz retained the layout of previous carriers, with an angled flight deck, island superstructure and four steam-powered catapults that could launch four planes a minute. At 1,092 feet she was just twenty-four feet longer than the older Kitty Hawk, but nearly nineteen thousand tons heavier. More than five thousand personnel are assigned to Nimitz carriers at sea, with three thousand manning the ship and another two thousand in the air wing and other positions.

Lower operating costs were not the only benefits of nuclear power. Although nuclear-powered carriers have a maximum official speed of thirty-plus knots, their true speed is suspected to be considerably faster. Nimitz and her sister ships can accelerate and decelerate more quickly than a conventional ship, and can cruise indefinitely. Like Enterprise, it is nuclear powered, but it also streamlined the number of reactors from eight to two. Its two Westinghouse A4W reactors can collectively generate 190 megawatts of power, enough to power 47,500 American homes. Finally, nuclear propulsion reduces a carrier battle group’s need for fuel.

Of course, the real strength of a carrier is in its air wing. The Carrier Air Wings of the Cold War were larger than today’s. During the 1980s, a typical carrier air wing consisted of two squadrons of twelve F-14 Tomcat air-superiority fighters, two squadrons of twelve F/A-18 Hornet multi-role fighters, one squadron of ten A-6 Intruder attack bombers, one squadron of 4-6 E-2 Hawkeye airborne early-warning and control planes, ten S-3A Viking antisubmarine planes, one squadron of four EA-6B Prowler electronic warfare planes and a squadron of six SH-3 antisubmarine helicopters. With slight variations per carrier and per cruise, the average Nimitz-class carrier of the Cold War carried between eighty-five and ninety aircraft.

Today the carrier air wing looks quite different. The venerable F-14 Tomcat aged out and was replaced by the F/A-18E/F Super Hornet. The A-6 Intruder was retired without a replacement when the A-12 Avenger carrier stealth bomber was canceled in 1991. The S-3A Viking was retired in the 2000s, and the EA-6B Prowler was replaced by the EA-18G Growler electronic attack aircraft. This resulted in a smaller carrier air wing of approximately sixty planes without dedicated fleet air defense, long range strike and antisubmarine warfare platforms.

The Nimitz-class carriers have participated in nearly every crisis and conflict the United States has been involved in over the past forty-two years. Nimitz was involved in the failed attempt to rescue U.S. embassy personnel from Tehran in 1980, and a year later, two F-14s from Nimitz shot down two Su-22 Fitters of the Libyan Air Force during the Gulf of Sidra incident in 1981. During the Cold War, Nimitz-class carriers conducted numerous exercises with regional allies, such as NATO and Japan, designed to counter the Soviet Union in wartime.

The Nimitz-class carriers are a monumental achievement—an enormous, highly complex and yet highly successful ship design. The ships will carry on the Nimitz name through the 2050s, with the entire class serving a whopping eighty consecutive years. That sort of performance—and longevity—is only possible with a highly professional, competent Navy and shipbuilding team.