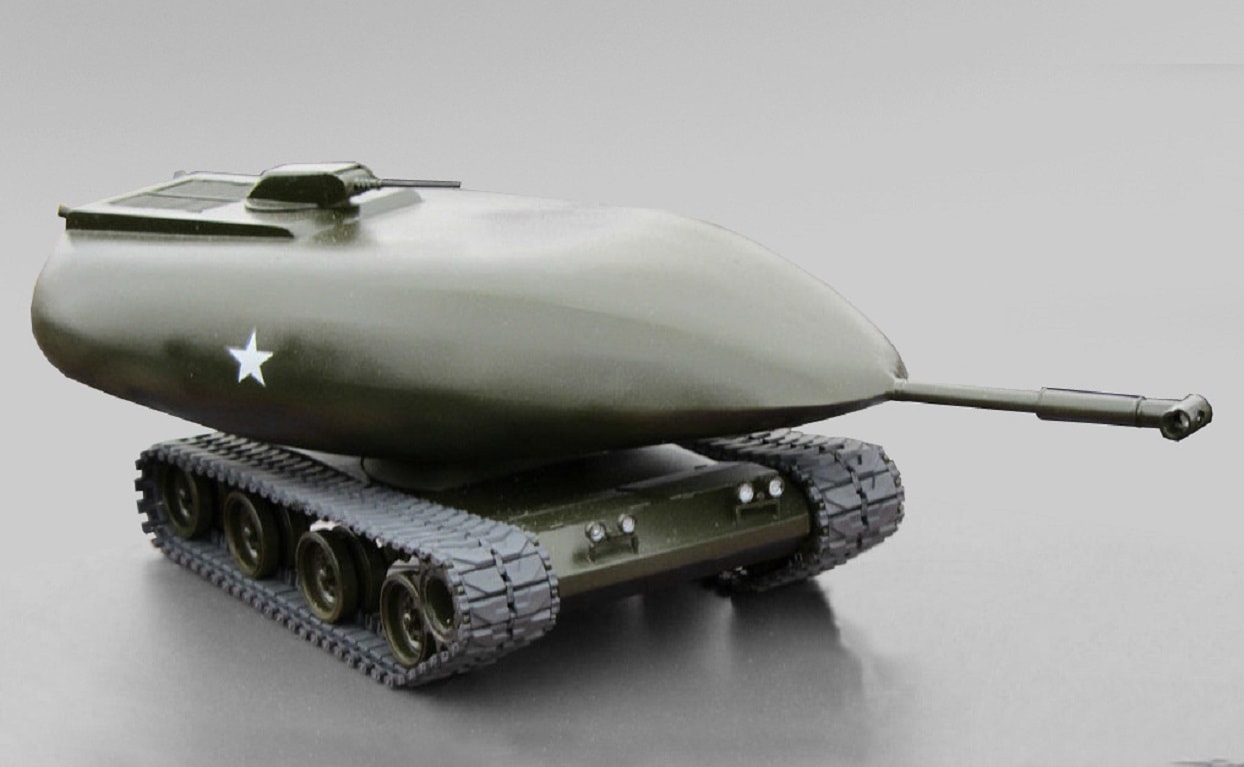 Even by the standards of the 1950s, with its visions of Jetsons-style technology, the Chrysler TV-8 was strange. Almost monstrous, like some mutated mushroom creature out of a 1980s post-apocalyptic nuclear horror flick.

Chrysler’s design was essentially a giant pod-shaped turret mounted on a lightweight tank chassis, like a big head stuck on top a small body. The crew, weapons and power plant would have been housed in the turret, according to tank historian R.P. Hunnicut’s authoritative “A History of the Main American Battle Tank Vol. 2“.

The four-man vehicle would have weighed 25 tons, with the turret weighing 15 tons and the turret only 10. It would have been armed with a 90-millimeter T208 smoothbore cannon and three machine guns, including a remote-controlled .50-caliber operated by the tank commander. “Closed circuit television was provided to protect the crew from the flash of nuclear weapons and to increase the field of vision,” writes Hunnicut.

The turret and chassis were designed to be separated to enable both components to fit inside air transports. “The heavily armored inner turret was surrounded by a light outer shell that gave the turret its pod-like appearance,” Hunnicut writes. “This shell was watertight creating sufficient displacement to allow the vehicle to float. Propulsion in the water was by means of a waterjet pump installed in the bottom rear of the turret. The outer turret shell was of sufficient thickness to detonate shaped charge rounds and it acted as spaced armor to help protect the inner turret.”

The Army eventually rejected the idea by 1956, though it did promise that the “novel features” of the TV-8 would be used in future tanks.

In addition, at about the same time as the TV-8 was proposed, the Army also examined a concept for a nuclear-powered tank designated R-32, which was seen as a potential replacement for the M-48 Patton. The 50-ton tank — twice the weight of the TV-8 — would have been armed with the 90-millimeter T208, and propelled by a nuclear power plant that created heat to drive a turbine engine. The range of the vehicle would have more than 4,000 miles.

“Obviously, such a tank would have been extremely expensive and the radiation hazard would have required crew changes at periodic intervals,” Hunnicut notes.

This is an understatement, to put it mildly. The logistics of a nuclear-powered main battle tank would have been stupendous. True, like a nuclear-powered warship, a nuclear tank wouldn’t need constant refueling and vulnerable gasoline tankers. But it would need radioactive fuel sooner or later. And even a nuclear tank still needs ammunition, so it would still be tied to its supply lines.

Maintenance would have been interesting, too. Pity the poor mechanics at the depot, or the recovery crews, who have to fix or tow a damaged tank leaking radioactive fuel and spitting out radioactive particles. Bombing a tank repair shop wouldn’t just disrupt maintenance: it would create a contaminated zone.

On top of the usual dangers such as fire or explosion, crews in combat would have worried being irradiated if their tank was hit. U.S. nuclear regulators would almost certainly have insisted that tank crews, who would be sitting on top of an atomic reactor, receive nuclear materials and safety training, which would have eaten up time for regular training such as gunnery.

In the end, tanks wouldn’t have been the only mutants.