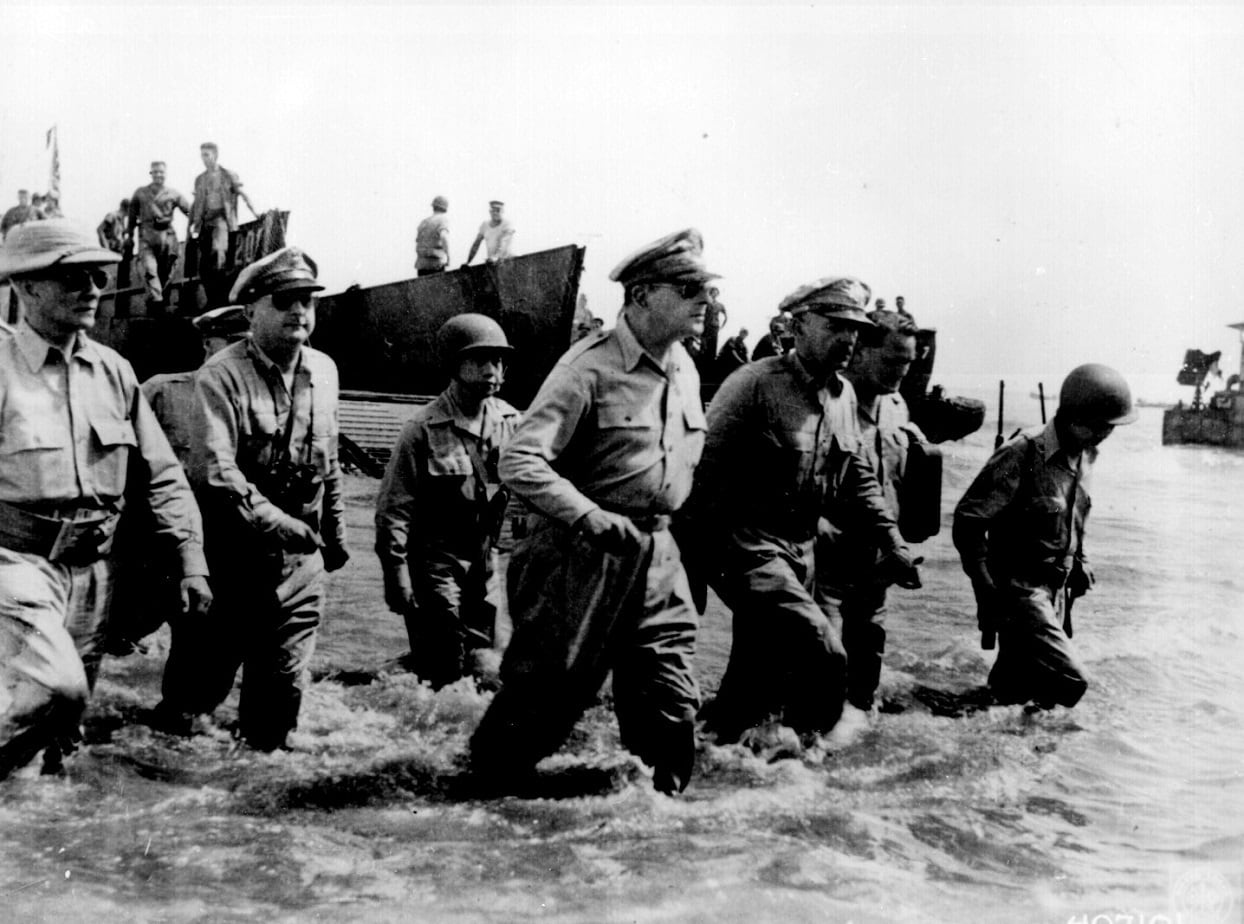 It would be nice if all American generals were great. How might Vietnam or Iraq have turned out if a George Washington, a Ulysses Grant or a George Patton had been in command?

Alas, call it the laws of probability or just cosmic karma, but every nation produces bad generals as well as good ones—and America is no exception.

What is a bad general? Defining that is like defining a bad meal. Some would say that failure on the battlefield warrants censure. Others would say that it is not victory, but success in fulfilling a mission that counts.

But for whatever reason, some American commanders have lost the battle for history. Here are 5 of America’s worst generals:

Great generals have great talents, and usually egos and ambitions to match. Yet backstabbing your commander-in-chief in the middle of a war is taking ambition a little too far. A former British officer, Gates rose to fame as Continental Army commander during the momentous American defeat of a British army at Saratoga in 1777.

Many historians credit Benedict Arnold and others with being the real victors of Saratoga. Gates thought otherwise, and fancied himself a better commander than George Washington. It’s not the first time that someone thought he was smarter than his boss. But Gates could have doomed the American Revolution.

During the darkest days of the rebellion, when Washington’s army had been kicked out of New York and King George’s star seemed ascendant, the “Conway cabal” of disgruntled officers and politicians unsuccessfully schemed to out Washington and appoint Gates.

How well that would have worked can be seen when Gates was sent to command American troops in the South. His poor tactical decisions resulted in his army being routed by a smaller force of Redcoats and Loyalists at the Battle of Camden in South Carolina in 1780.

Washington also suffered his share of defeats. But his persistence and inspiration kept the Continental Army in the field through the worst of times, which is why his face is on the one-dollar bill. If Gates had been in command, we might be paying for our groceries with shillings and pence.

The American Civil War was a factory for producing bad generals such as Braxton Bragg and Ambrose Burnside.

But the worst of all was McClellan, the so-called “Young Napoleon” from whom Lincoln and the Union expected great things. McClellan was a superb organizer, a West Point-trained engineer who did much to build the Union army almost from scratch.

But he was overly cautious by nature. Despite Lincoln’s pleas for aggressive action, his Army of the Potomac moved hesitantly, its commander McClellan convinced himself that the Southern armies vastly outnumbered him when logic should have told him that it was the North that enjoyed an abundance of resources.

Men and material the Union could provide its armies. But there was something that not even the factories of New York and Chicago could produce, and that was time. As Lincoln well knew, the only way the Union could lose the war was if the North eventually grew tired and agreed to allow the South to secede. Haste risked casualties and defeats at the hands of a formidable opponent like Robert E. Lee and his Army of Northern Virginia. The alternative was to split the United States asunder.

Ulysses S. Grant, who replaced McClellan, understood this. He gritted his teeth and wore down the Confederacy with incessant attacks until the South could take no more. McClellan was a proto-Douglas MacArthur who bad-mouthed his president and commander-in-chief. Grant left politics to the politicians and did what had to be done.

Had Lincoln retained McClellan in command of the Union armies, many former Americans might still be whistling “Dixie.”

When the Germans shattered his troops and his reputation at Kasserine Pass in Tunisia in early 1943, Fredendall was only a major general and a corps commander. If there was a saving grace for America, it was that he wasn’t commanding an army.

Not that Fredendall didn’t have real issues that would have tried any commander. Woefully inexperienced U.S. soldiers found themselves against Erwin Rommel’s Afrika Korps veterans. The Americans lacked sufficient troops, supplies and air cover (when was the last time an American general had to fight a battle while being pounded by enemy bombers?)

Yet Fredendall’s solution was to order an Army engineer company to build a giant bunker a hundred miles from the front lines. He also issued orders to his troops in a personal code that no one else understood, such as this gem of command clarity:

The Kasserine disaster had repercussions. It was a humiliating baptism of fire for the U.S. Army in Europe, and more important, caused British commanders to dismiss their Yank allies as amateur soldiers for the rest of the war.

Listing MacArthur as one of America’s worst generals will be controversial. But then MacArthur thrived on controversy like bread thrives on yeast.

He was indeed a capable warrior, as shown by the South Pacific campaign and the Inchon landing in Korea. But he also displayed remarkably bad judgment, as when he was commander in the Philippines in 1941. Informed that the Japanese had attacked Pearl Harbor and were certain to attack the Philippines next, MacArthur failed to disperse his aircraft—the only force that could disrupt the Japanese offensive in the absence of the American fleet—and to attack Japanese airfields before the enemy wiped out his air force.

But his crowning achievement was bad generalship in Korea. Yes, the landing at Inchon unhinged the initial North Korean offensive. But the rash advance into North Korea was a blunder of strategic proportions. Advancing in dispersed columns across the northern half of the peninsula was an invitation to be destroyed piecemeal. Advancing to the North Korean border with China also was a red flag for Mao-Tse Tung, who feared that American troops on his border were a prelude to U.S. invasion.

Perhaps Mao would have intervened anyway. But MacArthur’s strategy certainly helped unleash 300,000 Chinese “volunteers” who inflicted significant casualties on United Nations forces. Instead of holding a natural defense line around Pyongyang, which would have given the United Nations control of most of the peninsula, the UN troops retreated all the way back into South Korea in a humiliating reverse for U.S. power after the crushing victory of World War II.

Finally, there was MacArthur’s insubordination. He called for bombing China, as if liberating Korea was worth risking 550 million Chinese and possibly war with Russia as well. Whatever its military wisdom or lack thereof, it was a decision that should not have been made by generals under the American political system. When he made public his disagreements with President Truman, Truman rightfully fired him.

The early days of the 2003 Iraq War were bound to be a graveyard for military and political reputations, given the misperceptions and misjudgments behind America’s ill-fated adventure in regime change and nation-building. But Franks, who commanded the invasion, made a bad situation worse.

Critics say that Franks and senior officials, such as Secretary of Defense Donald Rumsfeld, concocted an invasion plan that used too few troops. It wouldn’t take a large force to slice through the ramshackle Iraqi army and topple Saddam Hussein, but securing a country the size of Iraq required a larger force.

And what then? There appeared to be little serious planning for what would happen the day after Saddam was gone. Like it or not, the U.S. military would become the governing authority. If it couldn’t or wouldn’t govern the country, who would? America, the Middle East and the rest of the world are still reaping the consequences of those omissions.

Finally, when it comes to bad generals, let us remember Truman’s immortal words about firing MacArthur:

I fired him because he wouldn’t respect the authority of the President. I didn’t fire him because he was a dumb son of a bitch, although he was, but that’s not against the law for generals. If it was, half to three-quarters of them would be in jail.