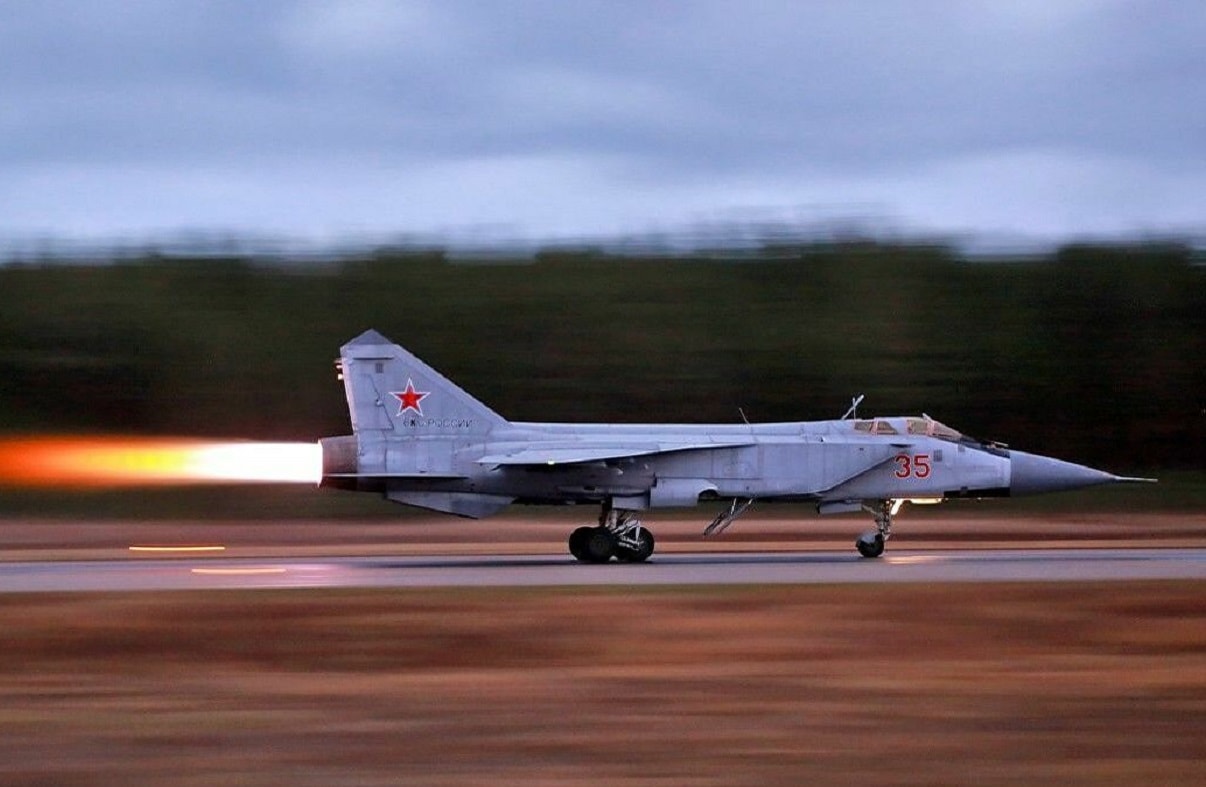 Although the fighter is a relic of the Cold War, it is one of the fastest production interceptors ever built.

From Russia, with Speed

The MiG-31’s origin story begins in the mid-1960s with Soviet attempts to overcome Russia’s tyranny of geography.

One of the primary concerns of the Soviet Air Defense Forces was the Soviet Union’s vast borders and the difficulty inherent to mounting a credible deterrent against American and NATO strategic bombers and reconnaissance aircraft. This concern became especially urgent after the infamous 1960 Gary Powers shoot-down and added fresh urgency to Russia’s air defense problem.

What the Soviet Union needed was an airplane, a fighter jet that would be incredibly fast, able to respond to threats along the Soviet Union’s borders at a moment’s notice. To that end, Soviet aerospace engineers developed the MiG-25, an impressive though flawed interceptor.

On paper, the MiG-25 is incredibly impressive. The airplane’s fuselage is built around a pair of enormous engines that generate a large amount of thrust and propel the aircraft in excess of Mach 2.8 when at high altitude.

In fact, the MiG-25’s engines are so powerful, Foxbat pilots learned in flight school not to push their interceptors past Mach 2.8, though the airplane could, in theory, achieve speeds in excess of Mach 3.2. At those speeds, however, the MiG-25’s engines risked catastrophic and irreparable damage.

Even at reduced Mach 2.8 speeds, atmospheric drag generated tremendous amounts of heat and thermal stress on the MiG-25’s airframe. The airplane would have ideally made extensive use of lightweight and robust titanium to deal with the pressures of extended supersonic flight.

Titanium’s high costs and complex manufacturing requirements resulted in an extensive use of high-strength steel instead, a novel material choice for an aerospace application. As a result, the Foxbat was much heavier than comparably-sized fighters, somewhat adversely affecting flight performance.

The MiG-31 is, in essence, a replacement for the earlier MiG-25, intended to address some of the earlier interceptor’s shortcomings, and although the two jets are superficially resemblant, they significantly differ in several aspects.

One of the Foxhound’s immediate improvements was its range, which increased thanks to an aerial refueling capability. The MiG-31 also features improvements to its airframe (though it also makes extensive use of heavier steel airframe components ), allowing for higher g maneuvers.

One of the other significant benefits over the Foxbat is the MiG-31’s much more advanced radar which gives the interceptor a look-down/shoot-down capability, controlled by a rear-seated weapon system’s officer. In addition, MiG-31s can network with other airplanes in their sortie, relaying information on enemy aircraft locations and thus covering a much wider area than unnetworked groups of airplanes.

Though the MiG-31 Foxbat is a Cold War-era interceptor, it remains an impressive airframe still in service with Russia and will likely remain in service until 2030 or perhaps even later.