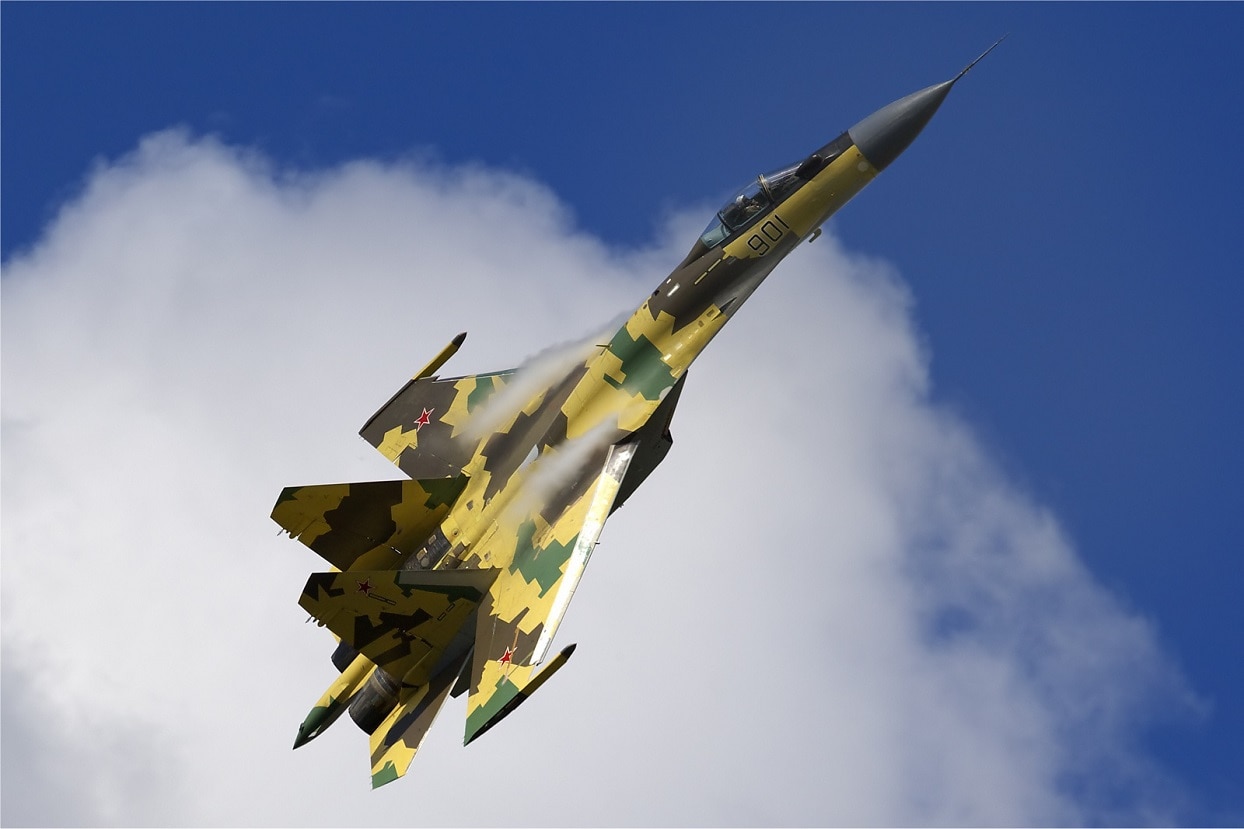 The Su-35 airframe is a deep modernization of a late Cold War-era jet — but it’s still no stealth fighter.

The Su-35 designation has been used before. In the early 1990s, Sukhoi developed a prototype airframe, the Su-35, also known as the Su-27M, as a serious, comprehensive upgrade of the Cold War-era Su-27 airframe.

The Soviets designed the Su-27 as an air superiority platform, intended to take on the United States’ F-15 Eagle and F-14 Tomcat, and as an air defense interceptor to engage American B-1B Lancer and B-52 strategic bombers.

That modified Su-27 airframe did not enter production, but the Su-35 designation was resurrected more than a decade later, however. This airframe outwardly resembles the earlier Su-27, lacking the canards of the Su-27M, but features thrust-vectoring engines for good maneuverability.

China has proven to be the Su-35’s biggest and first importer, signing a purchase contract in 2015 with the Russian government for 24 Su-35 airframes.

A key concern over the sale from the Russian side had been Chinese reverse-engineering. China had previously copied the Su-27 and Su-33 to create their own domestically made versions of the airplanes. In addition, the Chinese were reportedly very much interested in the Su-35’s engines, as domestic Chinese engines have been less capable than those made by Russia or the United States.

There is an argument to be made that the Su-35 is the most advanced 4+ generation fighter in existence today. And it is indeed highly capable — super maneuverable with a high range and weapon load-out, capable of engaging other aircraft at extreme distances. Perhaps its only shortcoming is its stealth capabilities.

As a non-stealthy fighter, the Su-35 could be at a disadvantage against a stealthy aircraft. Still, studies by RAND Corporation and other defense analysts indicate that the Su-35 could more than hold its own in a fight against F-35 fighters, aided in large part by the aircraft’s powerful engines, which help to extend the aircraft’s engagement ranges dramatically.

Although the Su-35 isn’t a stealthy aircraft, it is perhaps one of the most capable 4+ generation non-stealthy airframes in existence. Thanks to highly capable and thrust-vectoring engines, the Su-35 combines high agility with an extended supercruise capability that could partly make up for lack of stealth.