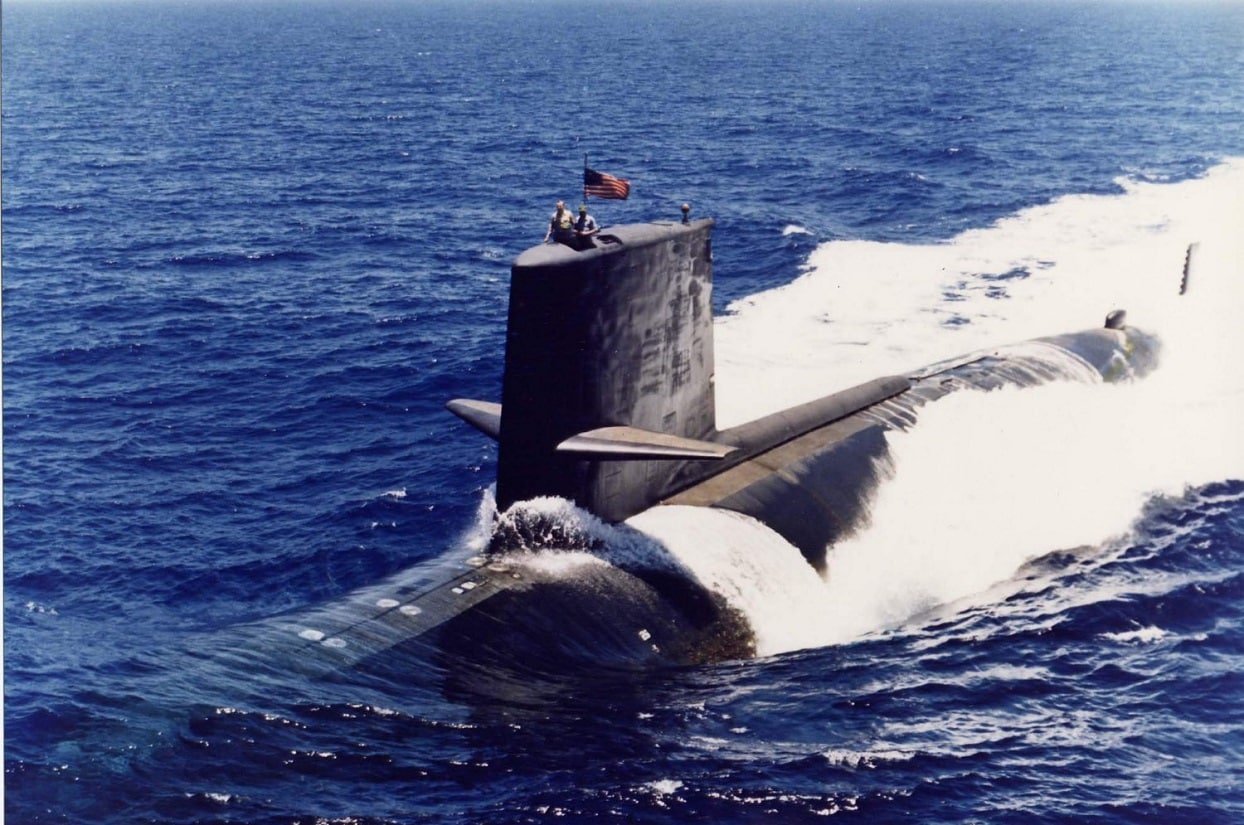 The Skipjack-class submarines were arguably the first truly modern postwar submarines of the U.S. Navy. Combining two new innovations—a new high-speed hull design and nuclear power—the innovative, fish-shaped subs were the basis of all future American submarines up to the present day.

The United States Navy officially entered the Nuclear Age on September 30, 1954. That was the day the USS Nautilus, the first nuclear-powered attack submarine ever produced, entered service. Powered by a S2W reactor, Nautilus had a virtually unlimited striking range. Nautilus was a technological triumph, heralding a new age in submarine warfare.

Although successful, Nautilus was a one-of-a-kind, proof-of-concept boat. The Skipjacks, with their improved S5W pressurized water reactors, introduced nuclear power to the bulk of the fleet. The S5W was a highly successful design that produced fifteen thousand shaft horsepower and was the standard U.S. Navy reactor until the introduction of the S6G reactor that powers the Los Angeles class. The reactor was also provided to the United Kingdom, where it powered the Royal Navy’s first nuclear powered warship, HMS Dreadnought.

Still, nuclear power represented just half of what the Skipjack class brought to the table. Although the Navy had introduced the nuclear-powered Skate-class subs to the fleet, they were built to a conventional design that made them more resemble late war submarines. As a result, their speed was limited to maximum of twenty knots. A new, hydrodynamic hull that would fully exploit the power of the reactor was needed.

Indeed, Albacore was fast—its sleek hull propelled it to twenty-six knots, and with the introduction of silver-zinc batteries and contra-rotating propellers it reached an amazing thirty-three knots. It could also turn quickly, at a rate of 3.2 degrees per second, instead of the average 2.7 degrees per second of conventional submarines.

The two innovations, a teardrop hull and nuclear power, proved complementary in the Skipjack class. Nuclear powered, the Skipjacks did not spend most of their time on the surface, and thus could dispense with design characteristics that improved seakeeping on the surface. A nuclear-powered boat could spend all of its time underwater, so it made sense to make their hulls as underwater efficient as possible.

The submarines were also well armed, with six Mk. 59 bow torpedo tubes. Unlike previous classes, they did not have aft-firing torpedo tubes—their large single propeller made firing torpedoes rearward hazardous. They could fire the Mark 16 antiship torpedo, a veteran of the latter days of World War II. They could also fire the Mark 37 antisubmarine torpedo, a homing torpedo with both active and passive guidance. Eventually the single Mark 48 torpedo replaced both the Mark 16 and Mark 37. Finally, the class could also launch the Mark 45 ASTOR antisubmarine wire-guided nuclear torpedo, which had a range of eight miles and packed an eleven-kiloton nuclear warhead.

Six Skipjacks were built—Skipjack, Scamp, Scorpion, Sculpin, Shark and Snook. The third ship in the class, Scorpion, was lost with all hands in 1968 under mysterious circumstances.  Although generally regarded as a success, the accelerated pace of weapon development during the Cold War ensured that a replacement for the Skipjacks was just around the corner. Just halfway though the design cycle, a new class, the Thresher class (later the Permit class, after Thresher was lost), was already on the drawing board. These kept the nuclear propulsion and teardrop hull form of their speedy predecessors, but as a larger, heavier sub were slower.

The Skipjack’s hull was later used as the basis of the first purpose-built fleet ballistic missile submarines, the USS George Washington class. A 130-foot-long missile compartment was inserted between the navigation/control areas and the nuclear reactor. Each of the five George Washington boats was fitted with sixteen Polaris A1 missiles. The first submarine-launched ballistic missile, each Polaris A1 had three two-hundred-kiloton nuclear warheads and a range of 2,500 nautical miles.

The Skipjack class was an example of how innovative new technologies can combine to produce a weapons system with vastly improved characteristics. The design was so successful that it provided a basis for future submarines, not only in the United States, but elsewhere around the world. Skipjack’s motto was “Radix Nova Tridentis,” or “Root of a New Sea Power”—an accurate description of this unique class of submarines.