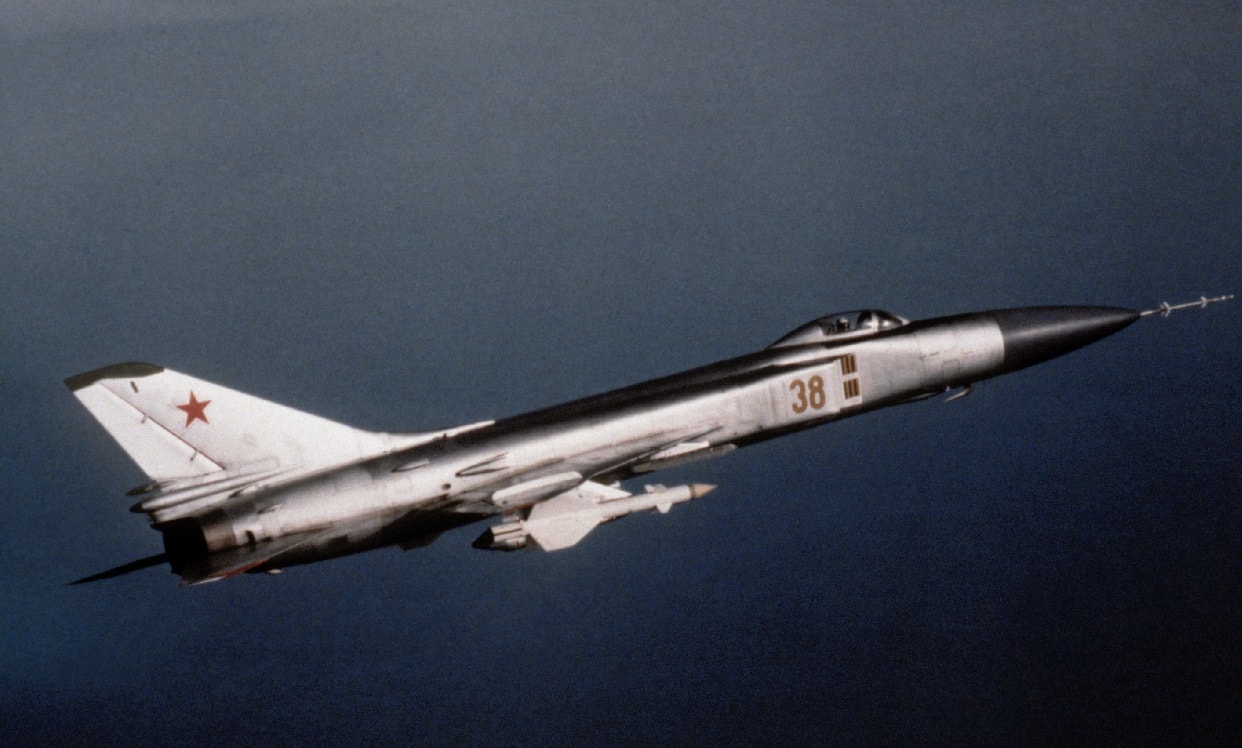 Dubbing the Soviet Sukhoi-15, or Su-15, interceptor the “Boeing Killer” should have been a compliment. The name evokes an image of a little fighter jet taking on America’s giant Boeing B-52 bomber.

But actually, the name “Boeing Killer” refers to a rather dubious accomplishment of the Su-15: shooting down two Boeing civilian airliners, including Korean Air Lines Flight 007 in 1983. It’s the title of the 2015 book Sukhoi Su-15: The Boeing Killer by Yefim Gordon, perhaps the most prolific historian of Soviet military aircraft.

The Su-15, NATO code name “Flagon,” began life in the early 1960s, when the Sukhoi design bureau was in trouble. The engines of its single-engine Su-9 “Fishpot” and Su-11 “Fishpot-C” air-defense interceptors had proven unreliable. The Soviet air defense command (PVO) wanted twin-engined interceptors such as the Yakovlev-28 “Firebar”and Tupolev-128 “Fiddler,” which were thought to be more reliable. At the same time, the United States was deploying the high-altitude B-52 Stratofortress and the (never-built) Mach 3 B-70 Valkyrie.

Sukhoi proposed a twin-engined Mach-2 interceptor armed with better radar and two AA-3 “Anab” air-to-air guided missiles. Like many Soviet interceptors, the Flagon was a something of a manned missile, with ground control expected to guide the aircraft close enough to the target to use its onboard radar and missiles.

The Soviets feared they would face both slow, high-flying bombers, which interceptors could attack from behind, and fast Mach 2 bombers (like the U.S. B-58 Hustler), according to Gordon’s book. “Without a significant advantage in speed the interceptor stood no chance of destroying such targets in pursuit mode; hence high-speed targets were to be intercepted in head-on mode, and both tactics would be used against slower aircraft.” For high-flying targets above the Su-15’s maximum ceiling of sixty thousand feet, the interceptor ascend into a zoom climb and then fire missiles from below.

“The military was not entirely happy with the performance of the production Su-15,” Gordon notes. There were problems with the flight controls and engines. Just as crucial, its radar lacked a “look down” capability to detect the new generation of low-flying bombers. Still, some 1,290 were built between 1965 and 1979, becoming one of PVO’s primary interceptors. It complemented the speedier MiG-25 “Foxbat,” with the latter used to intercept faster bombers. The Flagon was retired in Russian service in 1993, though it flew on for the Ukrainian Air Force until 1996.

The Su-15 never saw combat with other warplanes (and neither did its U.S. counterpart, the F-106, though its predecessor the F-102 did see combat in Vietnam). But as a primary air defense fighter during the Cold War, it was involved in many intercepts of aircraft intruding into Soviet airspace. On July 18, 1981, a Canadair CL-44 freighter, flown by an Argentine crew, crossed the Iranian border into Soviet territory. Its mission was to carry Israeli arms to Iran to sustain Iran’s war with Iraq. The CL-44 was intercepted by an Su-15, which signaled the intruder to land. What happened next is debated. The Flagon pilot claimed that he was unable to fire a missile before the freighter left Soviet airspace, and therefore rammed the CL-44, causing it to crash. (However, American aviation historian James Oberg suggests the Soviet pilot accidentally collided with his target and covered up the mistake.)

And the “Boeing Killer” moniker? On April 20, 1978, a Korean Air Lines 707 en route from Paris to Seoul entered Soviet airspace near Murmansk. It was intercepted by an Su-15. The Soviets claimed the plane was on a spy mission and ignored commands to land. The South Koreans claimed it was an accidental overflight and the Soviets were trigger-happy. Regardless of the reason, the Su-15 fired two R-60 missiles, one of which hit. The Korean pilot managed to land the 707 on a frozen lake, but two people were killed.

The next incident was the most notorious in the history of the Su-15—and Soviet air defense. On September 1, 1983, Korean Air Lines Flight 007, en route from Seoul to Tokyo, entered Soviet airspace over Sakhalin Island near Japan. The 747 was intercepted by Su-15s, which fired warning shots (the shells were invisible in the darkness to the Korean pilots because the interceptors’ cannon lacked tracer rounds). Before the 747 left Soviet airspace, the Su-15s were ordered to shoot it down. Hit by two missiles, the airliner crashed, killing all 269 passengers and crew (including a hawkish U.S. congressman who was president of the John Birch Society). The Soviets claimed KAL 707 was on a spy mission and ignored orders to land, but President Ronald Reagan denounced the incident as Soviet barbarism.

Ilya Grinberg, who writes on Soviet aviation history, doubts that the Soviets referred to the Su-15 as the “Boeing Killer.” “Soviet aircraft did not have such nicknames,” he told the National Interest. “They would be called affectionate names like ‘Sushka’ [‘biscuit’] and ‘Sukharik’ [‘crouton’] for the Su- types.”

Unfortunately for the luckless Flagon, it became famous for another reason. It was an Su-15 that collided in 1968 with a MiG-15 flown by cosmonaut Yuri Gagarin. The collision killed the first human being to fly into outer space.

Nonetheless, referring to the Su-15 as a destroyer of airlines seems unfair. Other aircraft flown by other nations have accidentally killed civilians. We would never call the B-17, the A-10 or the Predator drone the “baby killers.”

It’s not aircraft that are responsible. It’s people.

Michael Peck is a defense writer based in Europe. He can be found on Twitter and Facebook.