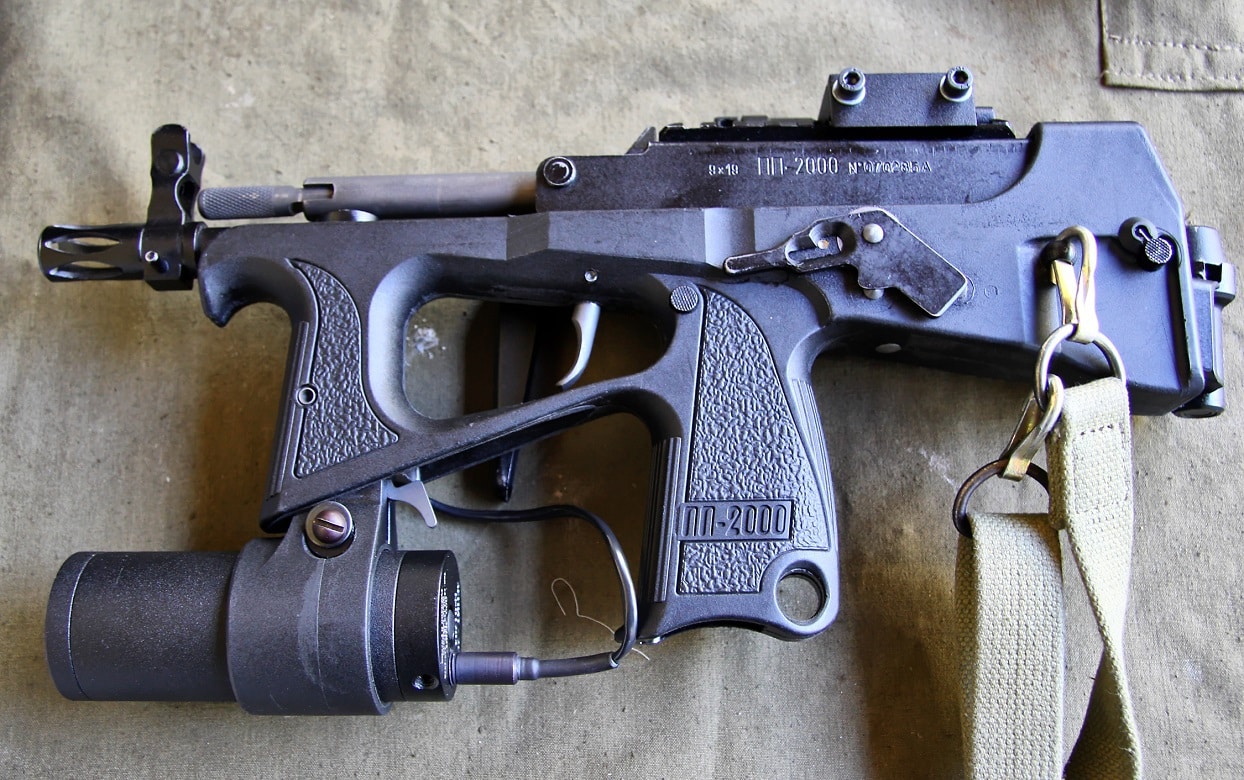 The submachine gun was invented during World War I as a weapon to deal with the confines of trench warfare. Short, fully automatic and chambered in a pistol caliber, the submachine gun could quickly clear a trench line or bunker of enemy troops armed with less wieldy, slower-firing bolt-action rifles. The “SMG” later armed paratroopers, vehicle crews and guerrillas, and was instrumental in street and urban fighting during World War II.

The submachine gun has gradually lost ground to today’s assault rifle, which packs a 5.56- or 5.45-millimeter rifle round into a fairly short rifle, often with a short barrel or folding stock. Nevertheless, submachine guns still proliferate on the modern battlefield today, in the hands of special forces and rear-area troops. Here’s a look at the five most common submachine guns.

Developed by FN Herstal, one of the most prolific gun companies in the world, the P90 Personal Defense Weapon is a clean design break from other submachine guns. The P90 is a bullpup design, placing the magazine behind the trigger group. This allows the weapon to be shorter and more compact while retaining a longer barrel length. FN’s unusual-looking weapon has an overall length of just 19.88 inches while retaining a 10.39-inch barrel.

The P90 is fed from a fifty-round translucent polymer magazine sitting parallel above the barrel. This eliminates the problem of a protruding magazine catching on objects when brought to bear. FN Herstal’s weapon has maximum rate of fire of nine hundred rounds per minute, and fires the same 5.7×28-millimeter round used in its Five-seveN series of handguns as an alternative to nine-millimeter Parabellum.

Although not technically a submachine gun—the Mk. 18 Mod 0 uses the same 5.56-millimeter ammunition as the M4 carbine—the ultrashort carbine has a barrel length of just 10.3 inches, making it very compact indeed. The weapon was developed by the Naval Surface Warfare Center–Crane Division as a replacement for the Heckler and Koch MP-5 submachine gun, especially in SEAL arsenals.

The heart of the Mk. 18 Mod 0 is a new barreled upper receiver, the Close Quarters Battle Receiver. The CQBR features the shortened 10.3-inch barrel and a modified gas system that cycles more gasses into the system—likely to allow the weapon to continue cycling properly with a suppressor attached. The Mk. 18 Mod 0 previously came with a carry handle, but later versions incorporate a Picatinny rail running along the top of the upper receiver to accommodate a red dot or holographic sight, light attachment and laser pointer. The result is a powerful, highly effective weapon that is usable in the tight confines of urban areas and inside ships.

Looking something like a modernized version of the world-famous Uzi, the Heckler and Koch MP-7 was developed around the same time as FN Herstal’s P90, as NATO explored standardizing on a new submachine gun and submachine-gun round. The MP-7 has the appearance of a giant pistol, but with the weapon lies a modern operating system and entirely new round expressly developed for the gun.

The MP-7 is a fully automatic submachine gun. Like the Uzi, the MP-7 magazine resides inside the weapon’s pistol grip. This configuration reduces the weapon’s length with shoulder stock extended to twenty-five inches, and sixteen inches with the stock collapsed. The weapon is made even shorter by utilization of a gas piston system, eliminating the need for a bolt-return system as featured on the Mk. 18 and other direct impingement rifles and carbines.

The MP-7 uses a 4.6×30-millimeter round developed for the gun designed to provide maximum penetration of body armor and an effective range of up to two hundred meters. The weapon can be fitted with twenty-, thirty- or forty-round magazines. The MP-7 is used by a number of special-forces units worldwide, and was reportedly used on the 2011 Abbottabad raid that killed Osama bin Laden, although it was not the weapon used to kill bin Laden himself.

The gold standard for decades in submachine guns, the Heckler and Koch MP-5 is still found worldwide in a variety of police and military units. The MP-5 is actually a scaled-down H&K G3 battle rifle, chambered for nine-millimeter Parabellum. The MP-5 follows the G-3’s general shape and conventional configuration, right down to the adjustable sights.

The MP-5 is typically equipped with a thirty-round magazine, and is just twenty-seven inches long with a 8.9-inch barrel. Notable variations include the shorter-barreled MP-5k and the integrally suppressed MP-5SD. The MP-5 achieved notoriety in 1980 when the UK’s Special Air Service used it to free hostages at the Iranian embassy in London. The MP-5 quickly became the weapon of choice for hostage rescue and special forces unit worldwide.

For decades, Soviet and Russian Army units relied on the AKSU-74. Based on the AK-74 assault rifle, the weapon featured a shorter barrel and folding stock and first surfaced during the Soviet Union’s war in Afghanistan. In the 2000s, Russian forces introduced a replacement for the AKSU-74, the PP-19-01 Vityaz submachine gun.

Like the AKSU-74 and even the MP-5, the Vityaz is a scaled-down version of a battle or assault rifle, chambered for pistol-caliber ammunition. The weapon has a folding stock with adjustable cheek piece, an overall length of twenty-seven inches with stock extended, and weighs 6.2 pounds empty. The Vityaz has a rate of fire of eight hundred rounds per minute, with a maximum range of two hundred meters. Like other weapons worldwide, the manufacturer, Rosoboronexport, offers the weapon with a full-length American-designed Picatinny rail for easy installation of optics, lights, lasers and other aiming devices.