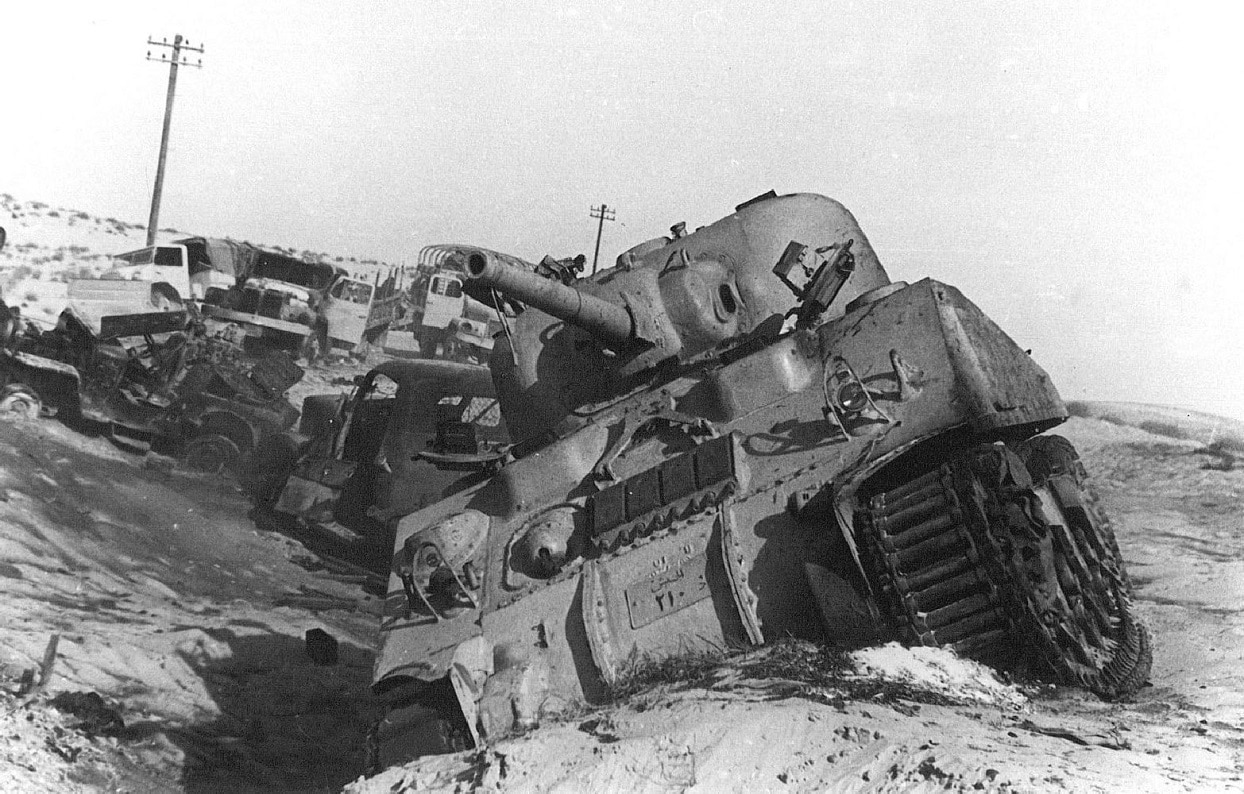 The war began with an imperialist invasion to seize the Suez Canal. It ended with the Soviet Union threatening to nuke Britain, France and Israel.

The 1956 British and French attack on Suez, and the parallel 1956 Israel-Egypt War, have to be among the strangest conflicts in history. The cast of characters includes two fading empires reluctant to admit their decline, a charismatic Arab dictator, a paranoid Jewish state, a semi-fake war and a superpower with nuclear weapons.

The crisis began over who just owned the Suez Canal, gateway between Europe and Asia. In July 1956, Egyptian president Gamal Abdel Nasser announced he would nationalize the canal, which was controlled still by European shareholders even after Egypt achieved independence from Britain (the same situation would later apply to the United States and the Panama Canal). Nasser’s decision was prompted by the cutoff of American funding for the massive Aswan Dam, after Nasser had signed a huge arms deal with the Soviet bloc.

Nasser’s response was simple: if the Americans and British wouldn’t subsidize the Aswan Dam, then Egypt would nationalize the Suez Canal and use the toll revenues to build the dam itself. Unfortunately, he forgot a basic rule of history: there is nothing more dangerous than a declining empire.

Or two empires. In 1956, the sun had already set on the British and French imperiums, even if they couldn’t admit it to themselves. Battered and bankrupted by World War II, these former great powers were still coming to grips with the new reality of becoming supporting actors on a global stage dominated by America and Russia.

But for Britain, the Suez Canal was a symbol of imperial prestige, as well as a lifeline to its bases in the Middle East and Persian Gulf. For the French, the issue was less about the canal and more about Nasser, whom they accused of arming Algerian rebels fighting for independence from France. British prime minister Anthony Eden alluded to Munich, as if taking down Nasser would make up for not stopping Hitler in 1938.

Meanwhile, the Arab-Israeli conflict smoldered as it always does. After Israel’s victory in the 1948 War of Independence, Egypt sponsored Palestinian terrorist attacks from Sinai into Israel, to which Israel swiftly retaliated. The Israelis were convinced that another war was inevitable with Egypt, and they were eager to stop Egypt’s blockade of the Straits of Tiran, which kept Israeli ships from exiting the Red Sea to trade with Africa and Asia.

France, Britain and Israel eventually hatched a plan—the Protocol of Sèvres—breathtaking in its cynicism. First, Israel would invade the Egyptian-held Sinai Peninsula. Then, ostensibly to protect the Suez Canal, Britain and France would issue an ultimatum for Israel and Egypt to withdraw from the Canal Zone. When Egypt predictably refused, Anglo-French forces would invade and take over the canal. Nasser would be humiliated and overthrown, European control over the Suez Canal restored, and the good old days of nineteenth-century imperialism would be restored.

The war kicked off on October 29, 1956, with Israel’s Operation Kadesh, the brainchild of Chief of Staff Moshe Dayan. With typical ingenuity, Israeli P-51 Mustangs flew low over the Sinai to cut telephone wires with their propellers, severing Egyptian military communications. At the same time, Israeli paratroopers dropped on the strategic Mitla Pass through the Sinai mountains. Other paratroopers, led by Col. Ariel Sharon, raced across the desert to link up with them, as did other Israeli infantry and tank columns. Despite occasionally fierce fighting, Israel controlled the Sinai within a few days.

This gave Britain and France an excuse to issue their ultimatum. When Egypt ignored it, Operation Musketeer (Opération Mousquetaire to the French) commenced. A better name would have been Operation Mouseketeer, because the whole operation was Mickey Mouse. As pointed out by President Eisenhower, who knew more than most about planning invasions, the Anglo-French didn’t have a lot of troops compared to D-Day and other World War II landings. Some eighty thousand troops were involved, as well as more than two hundred warships (including five British and two French aircraft carriers) and hundreds of aircraft. While some of the British troops were unenthusiastic conscripts who couldn’t figure out why they were going to Egypt, the landings were spearheaded by elite British and French paratroopers and commandos.

After the Egyptian Air Force was destroyed in the opening hours of the invasion, paratroopers dropped on the Canal Zone, backed by Royal Marines coming in on amphibious landing craft. Troop-carrying helicopters from British carriers also conducted the world’s first ship-based helicopter assault.

Like the Israelis, the Anglo-French forces faced numerous but poorly trained and led Egyptian troops. Despite sporadic street fighting and sniper attacks—Nasser handed out guns to Egyptian civilians—the invasion was never really in doubt. The British suffered about a hundred casualties (compared to about four thousand at D-Day), the French lost about fifty men, and the Israelis around 1,100. Combined Egyptian losses to the dual invasions were on the order of eight thousand or so.

Militarily, the Anglo-Franco-Israeli plan was a success. Politically, it was a disaster. Antiwar protests erupted in Britain from a public that was in no mood to die for the empire. Others were shocked by the sheet deceit and manipulation of the operation.

However, what really mattered was the reaction of the superpowers. Soviet premier Nikolai Bulganin warned that the Soviet Union was ready to fire nuclear-armed ballistic missiles at Britain, France and Israel unless those nations withdrew. This, too, was a deception: the Soviet Union’s ICBM force was mostly propaganda at this time. Not to mention hypocritical, given that just a month before, Soviet tanks had brutally suppressed Hungarian rebels in Budapest.

Equally shocking was the reaction of the United States. Eisenhower and Secretary of State John Foster Dulles threatened economic sanctions against Israel if it failed to withdraw from the Sinai. It also threatened Britain’s oil supply (Saudi Arabia did embargo Britain and France) and considered selling off British bonds, which would have devastated the British economy. A UN resolution, spurred by the United States, called for a ceasefire and withdrawal of foreign forces.

The damage to the West was immense. U.S.-British relations were damaged, and Soviet prestige enhanced. Eden resigned as prime minister, while the British resigned themselves to no longer acting as an imperial power. The West Germans noted that the Soviets had threatened to attack Western Europe, and the United States had not protested. Israel grudgingly withdrew, and began preparing for the next war (which would come in 1967). Instead of being overthrown, Nasser became the hero of the Arab world; his comeuppance would also come in 1967.

Leaders such as Saddam Hussein and Muammar el-Qaddafi have left a bad taste in the mouth when it comes to Arab strongmen. And yet in this case, it’s hard not to sympathize a little with Nasser. Ultimately, the Suez Canal is Egyptian territory.

There have been other Western invasions since 1956, notably Iraq in 2003 and Libya in 2011. But for old-fashioned nineteenth-century imperialism, Suez was the last gap.