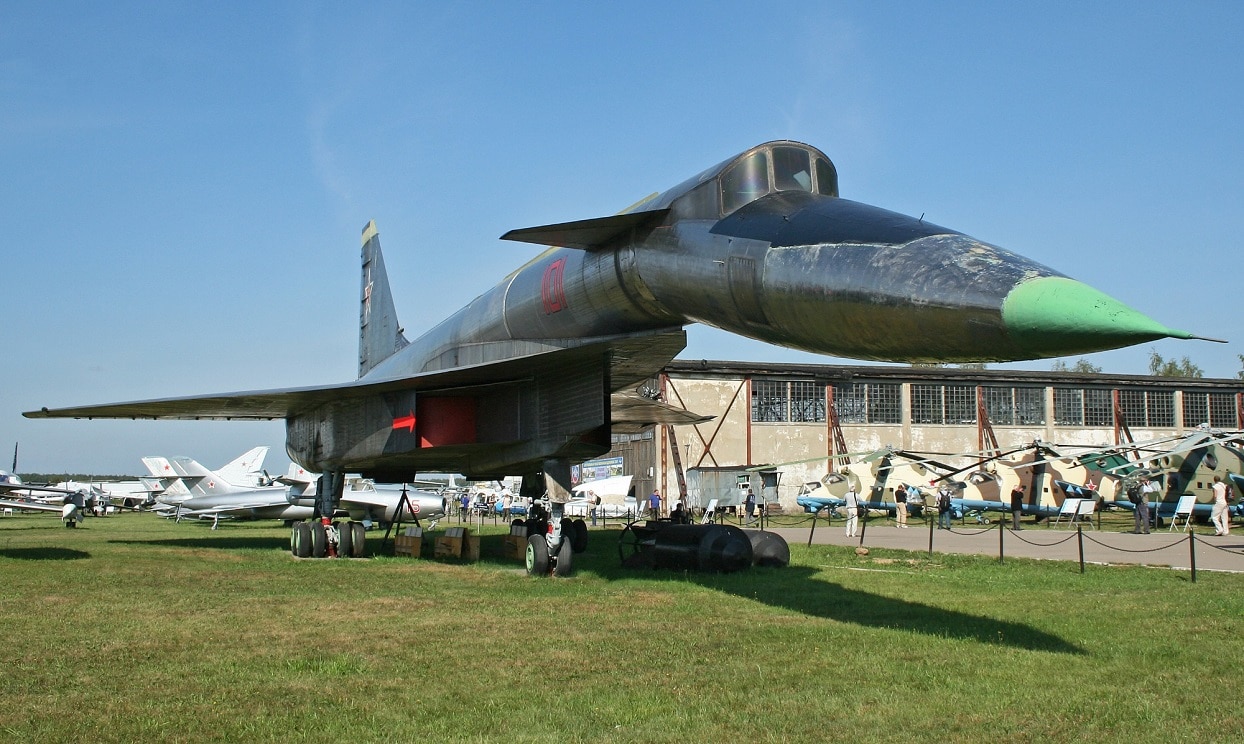 The Story of the T-4: In 1963, the Department of Defense canceled procurement of the XB-70 Valkyrie, a technological marvel of a bomber that had struggled to find a mission in the missile age.

The Soviet Union, aware of the development of the Valkyrie, embarked on at least two programs in response. One was the MiG-25 “Foxbat,” a high-speed interceptor capable of catching the killing the Valkyrie. The other was the Sukhoi T-4, which bore an uncanny resemblance to the Valkyrie itself. And like the Valkyrie, the T-4 resulted in a remarkably innovative aircraft that now resides only in a museum.

The T-4 emerged out of an interest in a high speed, high altitude aircraft that could penetrate U.S. airspace for the purposes of reconnaissance and strategic strike. The first request for the proposal came in 1963, at which point the USSR had begun procurement of the Tu-22 supersonic medium bomber, which could reach Mach 1.42 with a 4,3000-foot ceiling and a range of 3,000 miles. The Blinder, however, was regarded as problematic in service and insufficient to Soviet needs. Hence, both Sukhoi and Tupolev began to explore opportunities for a follow-up.

While the XB-70 had been canceled before the formal request for proposals for the T-4, the Soviets still saw some value in an aircraft of these capabilities. If the program had gone forward, it could have produced an aircraft with superlative performance. The T-4 was designed to reach Mach 3, with a service ceiling of nearly 80,000 feet and a range of 4,300 miles. With this performance, the T-4 could have outpaced the most advanced US interceptors of the day.

That said, The T-4 was not a clone of the XB-70. While some of the performance parameters were similar, the XB-70 was a vastly larger, heavier aircraft. Soviet bomber doctrine concentrated on the delivery of nuclear-armed cruise missiles, rather than the gravity bombs favored by the US Air Force. This made the T-4’s mission somewhat easier than that of the Valkyrie, which would have suffered badly to Soviet air defenses in its strike role. The T-4 was expected to carry two gigantic Kh-45 “Lightning” missiles, each of which could fly at roughly Mach 5 and deliver a nuclear or high explosive warhead. With conventionally-armed warheads, T-4s armed with Kh-45s could have posed a serious threat to U.S. carrier battle groups.

The T-4 was enormously demanding to the Soviet aviation industry. Although Sukhoi had extensive experience with fighters and attack aircraft, it had not to this point specialized in bombers. The T-4 required innovation in materials, engines, electronics, and configuration testing technology. While the United States had mastered the technologies necessary to build the Valkyrie in the 1950s and 1960s, it had not been able to produce an economically viable aircraft. Coming from a less sophisticated industrial base, the task for the Soviets was even more onerous. Sukhoi reported that the T-4 spurred nearly six hundred patented inventions during its development cycle.

Nevertheless, Sukhoi succeeded in producing the aircraft. The T-4 took its first flight in 1972. In testing, the aircraft reached Mach 1.2 at an altitude of over 36,000 feet. Although it visually resembled the Valkyrie in many ways, it had an oddly shaped, droopy nose that apparently gave pilots better situational awareness during landing and takeoff. Three more aircraft were under construction during the testing period, which ran until 1974.

By this time, however, the USSR had come to much the same conclusions about high-speed, high-altitude bombers as the United States. Shifts in technology—namely, the increased lethality of surface-to-air missiles at high altitudes and the presence of high-speed interceptors with long-range missiles—spelled doom for both the XB-70 and the T-4. Speed and altitude remained useful, but did not provide enough advantages from a cost-benefit perspective to offset the enormous investment required. By 1974, the project was ended. In an uncanny similarity to the XB-70, the Soviets completed two aircraft before canceling the program. As with the XB-70, one of those aircraft survives as a museum piece, near Moscow.

Lessons learned from the T-4 experience informed several follow-on projects. Sukhoi proposed a couple of T-4 variants, including one with variable-geometry wings, but the Soviet government didn’t bite. The Tu-22M “Backfire” solved many of the problems associated with the Blinder, and filled part of the gap the T-4 was intended for. Later on, the T-4 experience would help inform procurement of what would eventually become the Tu-160, a considerably larger supersonic bomber. The Tu-160 survived the end of the Cold War, although procurement plans dropped dramatically. Today, Russia is refurbishing its remaining Tu-160s for new missions. Following the path set by the United States, however, Russia is also investigating the potential for stealth.