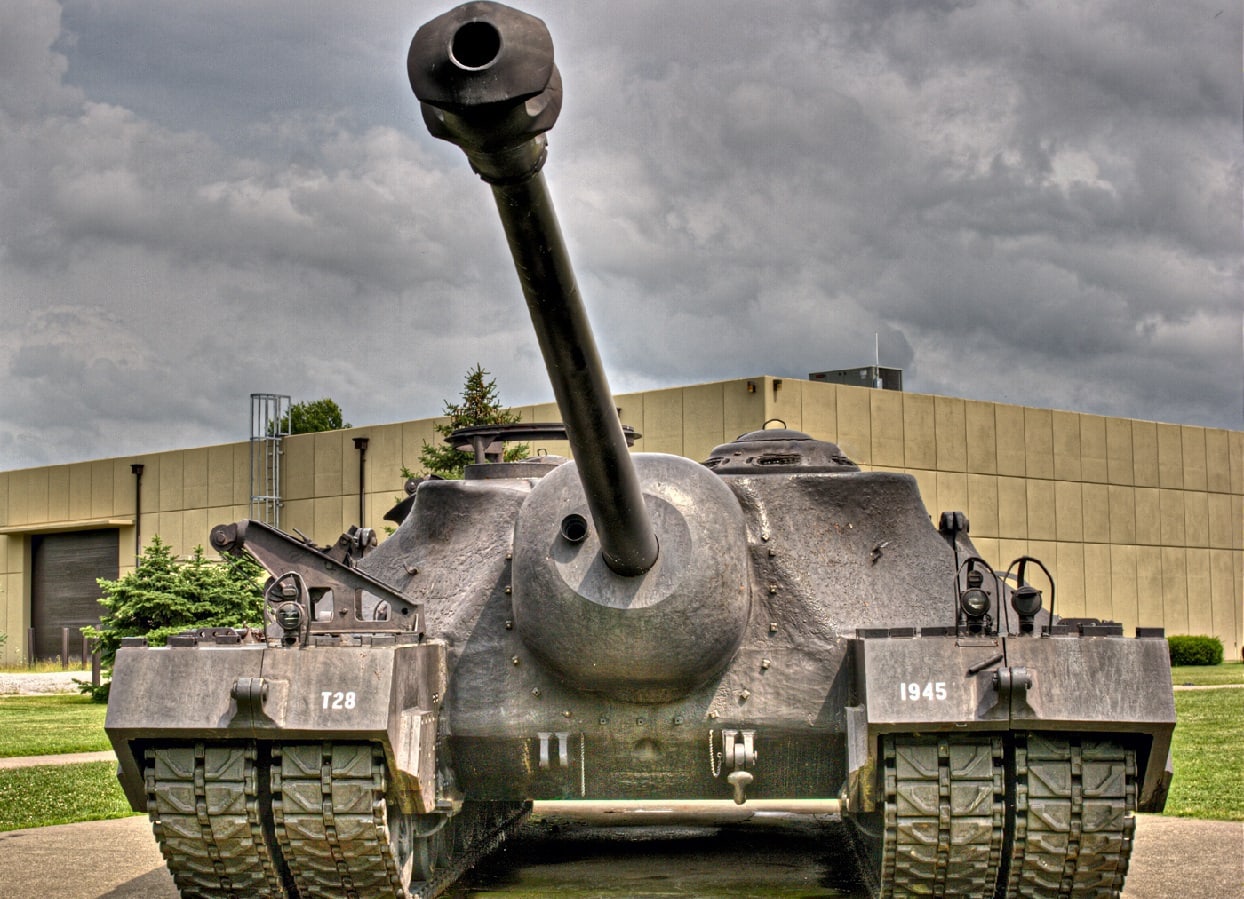 When it comes to tanks, America can only hope that size isn’t everything.

During World War II, Germany had its armored giants, such as the seventy-ton King Tiger, the 188-ton Maus or the never-built P.1000, a thousand-ton behemoth that waddled across the line between ambition and insanity. For their part, the Soviets fielded regiments of fifty-six-ton JS-2 heavy tanks.

Against those, the America’s thirty-ton M-4 Sherman seemed downright puny. For various reasons, such as ease of production and transportation overseas, the United States chose not to build heavy tanks during the Second World War. Even today’s M-1 Abrams weighs in at sixty to seventy tons, far less than the Maus.

Yet it turns out that the United States did build a monster tank during World War II. The ninety-five-ton T28 would have been the heaviest tank in American history.

Technically speaking—and we’ll be speaking of this later—the T28 was not a tank.

It was actually a self-propelled gun (also known as an assault gun). Instead of mounting the gun in a revolving turret as in a regular tank, the gun was stuck into the front hull, which meant it could only fire to the front.

That would have made the T28 an unusual weapon in the American arsenal. In World War II, the U.S. armored fleet consisted of turreted tanks as well as turreted tank destroyers (essentially tanks with less armor and a more powerful gun). Even the M-3 Grant, that misshapen stopgap fighting vehicle, had a turreted thirty-seven-millimeter cannon to supplement the seventy-five-millimeter gun fixed in the hull.

However, the Germans and Soviets used plenty of assault guns. The advantage of a German Sturmgeschutz III or Jagdpanther, or a Soviet Su-85 or Su-100, was that they were cheaper to produce than tanks (the turret is an expensive component) while still featuring thick armor and a powerful gun. Removing the turret also made them a smaller and less visible target. The downside was that a fixed gun firing forward meant that to engage targets to the side or rear, the whole vehicle had to pivot in that direction, rather than just swiveling the turret. In a freewheeling mobile battle against other tanks, that inflexibility could prove fatal.

But used as ambushers where their low profile made them hard to spot, or to provide fire support for infantry, they were very effective. To Allied foot soldiers who had to face them, whether they were called tanks or self-propelled guns made no difference.

The T28 was different than other U.S. vehicles because it was designed for a specific and specialized task. The U.S. Army had Shermans and tank destroyers aplenty. What it lacked was a weapon to breach German fortifications. What particularly worried American planners was the Siegfried Line, the long chain of pillboxes and bunkers that guarded Germany’s western border. A 1943 Ordnance Department study concluded that a heavily armed and armored vehicle would be needed to breach those defenses.

“The original concept proposed mounting the new 105mm gun T5EI in a tank with the equivalent of 8-inch frontal armor using the electric drive system developed for the heavy tank T1E1 and the medium tank T23,” according to tank historian R. P. Hunnicutt in his book Firepower: A History of the American Heavy Tank. “The high velocity T5E1 gun had excellent penetration performance against concrete and when installed in a heavily armored chassis was expected to be extremely effective in reducing heavy fortifications.”

The T28 was almost thirty-seven feet long from the rear to the tip of the gun, and about ten feet high. It carried a crew of four and the 105-millimeter gun. But for close-range defense against infantry, the T28 only had a .50-caliber machine gun mounted on the roof, which required the vehicle commander to expose himself to fire it.

Not surprisingly, the weight of this vehicle created concerns. Though double the weight of the M26 Pershing, the T28 used the same engine, which explains its top speed of eight miles per hour. Even that figure could only be achieved by reducing the T28’s ground pressure through two sets of tracks on each side of the vehicle (when traveling on a road, one set of tracks could be removed for greater speed).

Finding someone to build a vehicle of this size was another challenge. The Pacific Car and Foundry Company stepped forward, and completed the first T28 in December 1945. By then, the war had ended, and the initial order for five test vehicles had been cut to two, with the second delivered in January 1946.

Slashing the program was probably a good idea, because the Army didn’t know what to make of this giant. The vehicle was initially designated the T28 tank. Then as only bureaucrats can do, in February 1945 “a memorandum from the Chief of Ordnance requested that the T28 be redesignated as the 105mm gun motor carriage T95 because the cannon was not turret mounted and because of its limited secondary armament.”

In other words, without a turret and some additional machine guns, the vehicle didn’t deserve to be called a tank. “The heavily armed and armored T95 did not quite fit any of the usual categories for U. S. Army fighting vehicles,” Hunnicutt writes. “For example, tanks were expected to carry their armament in fully rotating turrets and self-propelled guns usually were lightly armored to achieve maximum mobility.”

Then in June 1946 came another adventure in military nomenclature. The T95 went back to being the T28, but this time designated as a superheavy tank.

The T28 never saw combat. How would it have fared if it had? Its 105-millimeter cannon would have been sufficient to take out German pillboxes—and tanks as well. But more important for the U.S. Army in 1945, the T28’s foot-thick frontal armor would have rendered it proof against dreaded German antitank guns like the eighty-eight-millimeter.

On the other hand, like any tank, it would have been vulnerable to mines. Armed with a single exposed machine gun for close-range protection, it also would have been vulnerable to infantry armed with rocket launchers and explosive charges. In that respect, it resembled the German Elefant tank destroyer: lacking any machine guns at all, Elefants were swarmed and destroyed by Soviet infantry at Kursk. Thus the T-28 would require close infantry support.

But ultimately, the United States would have discovered what the Germans did: a handful of massive tanks don’t really make a huge difference on a global-sized battlefield.

A surviving T-28 is scheduled to go on display at the armor museum at Fort Benning, Georgia, in 2020.