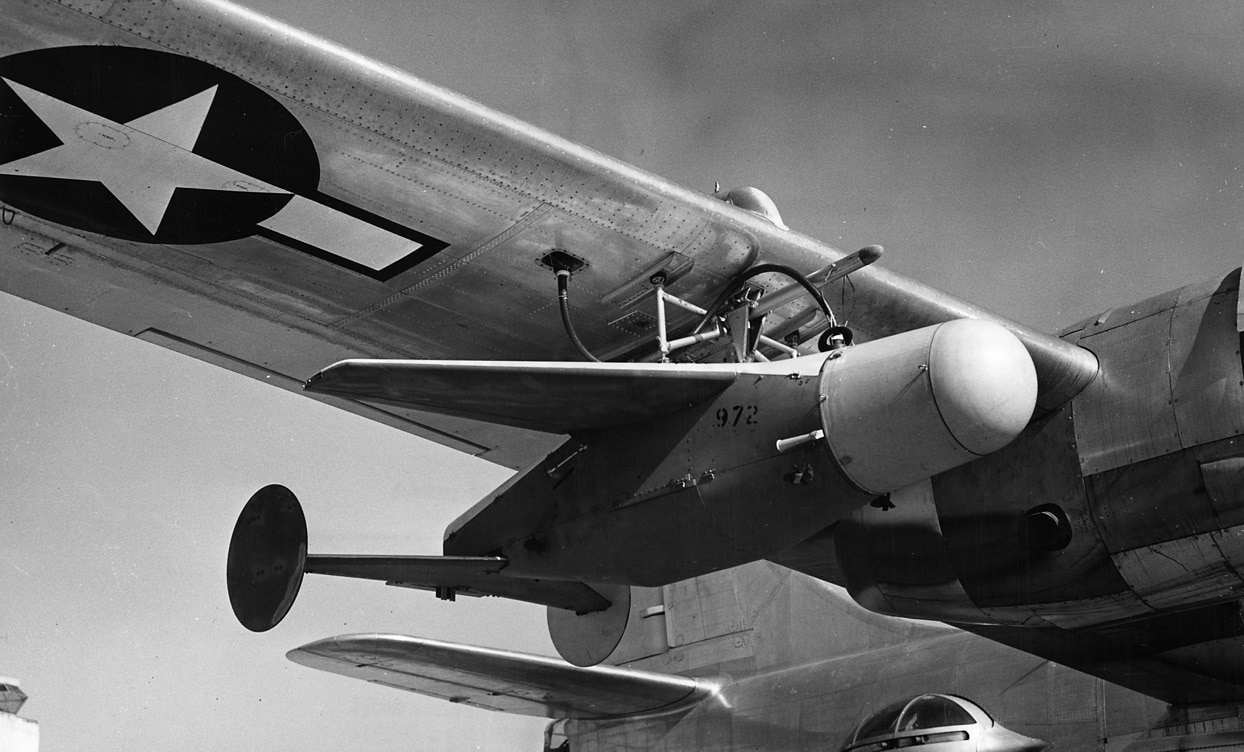 In April 1945, the Imperial Japanese Navy became the first victim of what would soon become a terrifying new ship-killing weapon.

Off the coast of Borneo, Japanese ships were attacked by U.S. Navy PB4Y Privateers (the naval version of the B-24 Liberator heavy bomber). But instead of regular bombs, the Privateers carried under each wing bulbous-nosed bombs with wings, as well as a double tail that gave it the look of a miniature B-24. Japanese sailors could only watch as these bombs—named the Bat—homed in on their ships.

By 1945, antiship smart bombs were nothing new. Since 1943, Nazi Germany had been using Hs293 and the Fritz-X, which sank or damaged as many as fifty Allied warships and cargo vessels, including the battleship Roma.

But the Nazi smart bombs were radio-guided weapons, which meant that a crewman on the launch bomber had to guide the bomb with a joystick while keeping the bomb and the target in sight. Not only could clouds or smoke throw off the gunner’s aim, but the bomber also had to fly close to the target, leaving it vulnerable to flak or interceptors.

However, the ASM-N-2 Bat glide bomb was different. In the nose of the bomb was a radar set. Based on the radar signals bouncing off the target, the bomb would automatically adjust its flight path to follow its prey. Thus, like a modern guided missile, the Bat could autonomously detect and track its target.

The Bat was initially conceived in 1941 as a television-guided weapon. But in 1943, the guidance system was changed into active radar homing, where the bomb was guided by radar waves from an onboard transmitter. By 1945, the Bat (so named because real bats find their targets by bouncing sonar waves off them) had finalized, as a thousand-pound bomb that changed its trajectory through a tail-mounted elevator moved by wind-powered generators.

“The Bat had an early S-band radar homing device, which was linked to the craft’s autopilot servo motors,” according to a 2002 Smithsonian Air & Space magazine article (the Smithsonian has a restored Bat in its collection). “These in turn were linked to elevons, control surfaces on the wings that functioned as both ailerons and elevators, steering the missile to its target.”

How effective was the Bat? Not very. “The success rate was mediocre at best,” notes an online guide to U.S. military missiles. “While some ships were indeed severely damaged, the drawbacks of the primitive radar seeker also became obvious. When attacking a ship near land (e.g. in port), Bat tended to home on all kinds of unwanted ‘targets,’ like docks, mountains, etc. Because of these problems, combat use of the Bat was relatively limited.”

What the Bat did do was exploit the U.S. advantage in radar technology. While the Germans were the masters in fields such as rocketry, the Americans and British were the leaders in electronics, such as microwaves and radar fuses for artillery shells. With its huge electronics industry backed by scientific powerhouses such as Bell Labs and MIT, it is no surprise that the U.S. was able to develop the first active radar homing smart bomb.

Compared to today’s radar-guided ship-killing missiles, like America’s Harpoon or Russia’s Yakhont, the Bat looks primitive. It lacked a rocket motor to change its trajectory, and its radar was relatively rudimentary. Nonetheless, the Bat is the ancestor of today’s antiship missiles.