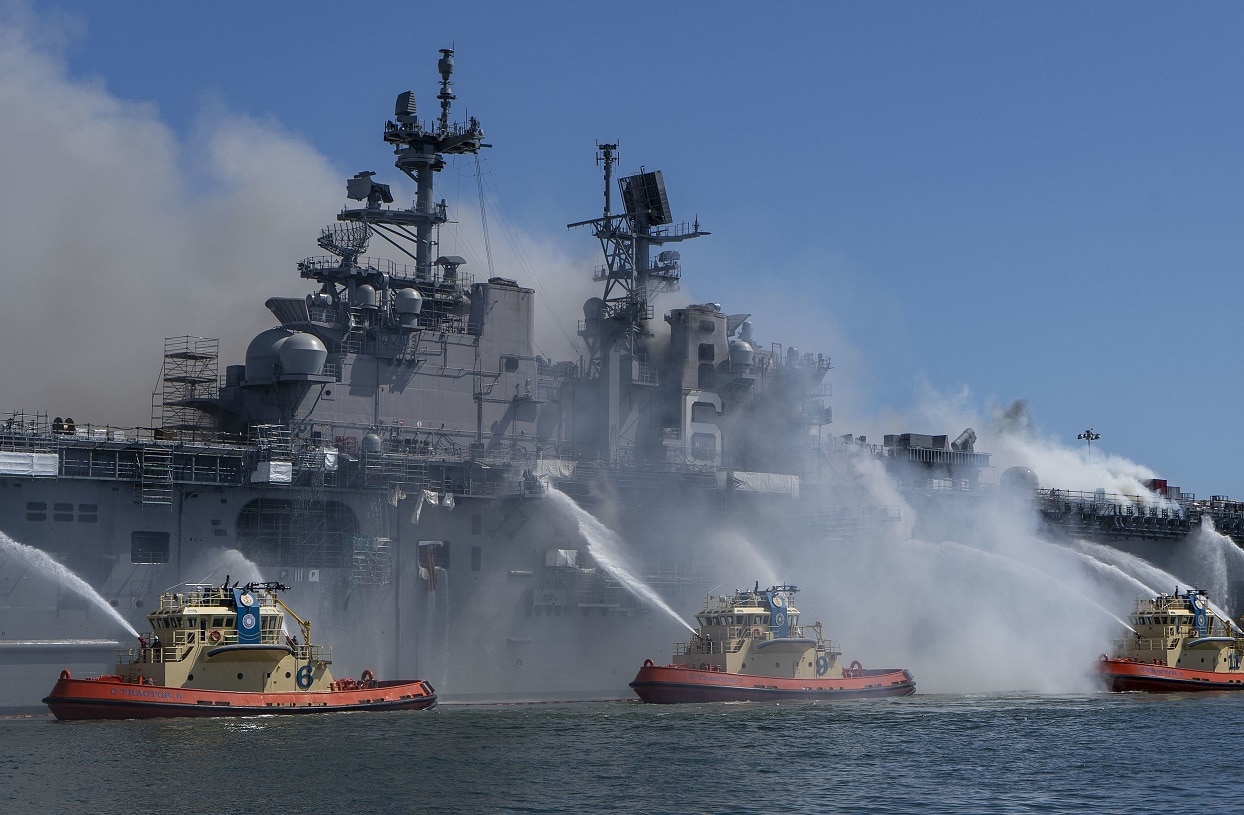 200712-N-BL599-1081 SAN DIEGO (July 12,2020) – Sailors and Federal Firefighters combat a fire onboard USS Bonhomme Richard (LHD 6) at Naval Base San Diego, July 12. On the morning of July 12, a fire was called away aboard the ship while it was moored pierside at Naval Base San Diego. Local, base and shipboard firefighters responded to the fire. USS Bonhomme Richard is going through a maintenance availability, which began in 2018. (U.S. Navy photo by Mass Communication Specialist 3rd Class Christina Ross)

Though sold for scrap, the U.S.S. Bonhomme Richard performed one last mission: A fire in 2020 crippled the amphibious assault ship but gave the Navy some valuable experience in battlefield salvage and repair.

The Navy scrapped the U.S.S. Bonhomme Richard, the amphibious assault ship that burned while at port last year following an arson, but despite the loss to the U.S. Navy and Marine Corps, the ship performed one last mission en route to the scrapyard.

About 300 miles out from its scraping destination, the Navy conducted a salvaging exercise in the Gulf of Mexico. The exercise involved mobile diving and salvage personnel and divers, according to comments given by Rear Adm. Eric Ver Hage, commander, Regional Maintenance Center, and director, Surface Ship Maintenance and Modernization for Naval Sea Systems Command.

“They were able to cut metal, flood spaces, de-water spaces, patch the holes at sea; it was really, really realistic,” Ver Hage said at the American Society of Naval Engineers Fleet Maintenance and Modernization Symposium 2021. “We’re going to do more of that.”

The Bonhomme Richard was a Wasp-class amphibious assault ship designed to deploy and land 1,900-2,100 Marines via amphibious landing craft and air cushion from the ship’s rear flood bay.

In July 2020, a fire started in the U.S.S. Bonhomme Richard’s below-deck area while the ship was at port in San Diego. Though the Navy ultimately extinguished the blaze, the ship languished for four days, severely damaging the ship’s interior spaces, warping the flight deck, and virtually destroying the ship’s conning tower. Because the ship was at port for maintenance, its firefighting system had been deactivated, exacerbating the intensity of the fire.

An investigation into the fire found that a sailor had intentionally set the fire, and the Naval Criminal Investigative Service charged him with aggravated arson.

The Navy estimated repairs would take five to seven years, potentially costing as much as $3.2 billion, significantly more than the cost of a new ship. As a result, the Navy sold the U.S.S. Bonhomme Richard for scrap, though it managed to salvage parts of its propulsion system as the fire did not damage it.

Rear Adm. Ver Hage noted that as the United States increasingly focuses on the Pacific region, maritime readiness demands more attention, as does repairing damage accrued during battle. The United States Navy’s Regional Maintenance Centers “along with the operational forces, mobile diving and salvage, and public shipyards” are an integral part of the battle repair process. “It’s a team effort.”

In the future, the Navy will also work with stricken hulls used as target practice to improve battle damage repair capabilities, Rear Adm. Ver Hage also explained. The peacetime loss of the U.S.S. Bonhomme Richard was undoubtedly a blow to the Navy. But even while en route to the scrapyard, the ship managed to perform one last mission.