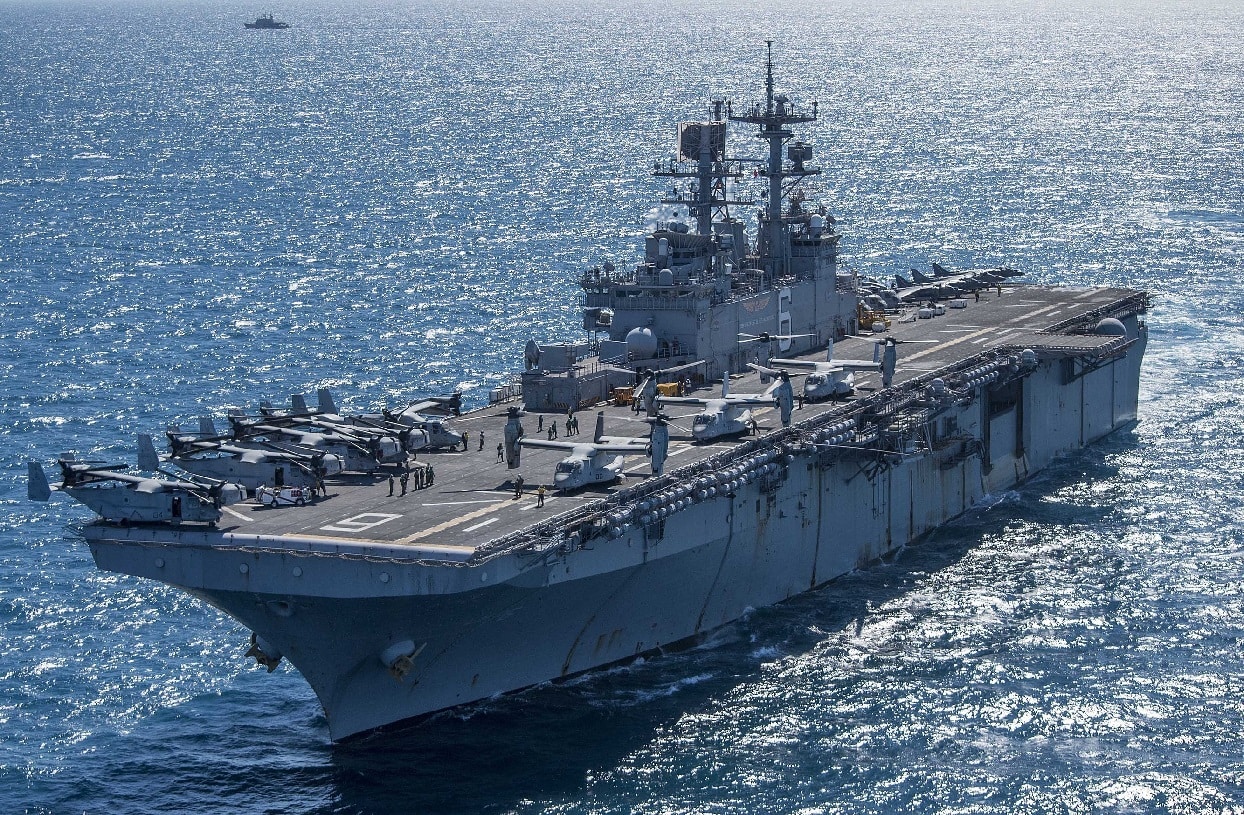 The former U.S.S. Bonhomme Richard, a U.S. Navy amphibious assault ship, was the focal point of a battle damage repair exercise during this past summer before being scrapped—as these kinds of practice runs and related skills are increasingly seen as being highly important for the United States to survive a large-scale maritime conflict.

According to Seapower Magazine, “the loss of the amphibious assault ship U.S.S. Bonhomme Richard pier-side to a raging fire last year was a terrible blow to the U.S. Navy, but as the hulk of the ship was being towed from San Diego to Brownsville, Texas, this summer for scrapping, it performed one last service to the Navy and the nation, one that the Navy will try to repeat in the future.”

It continues: “While still under tow in the Gulf of Mexico 300 miles from its destination, the Navy conducted a salvage exercise on the hulk of the Bonhomme Richard to provide valuable training for its personnel.”

Thomas Newdick at the War Zone noted that among the sailors who took part in the exercise were mobile diving and salvage personnel and divers.

“Essentially, battle damage repair teams, including operational forces, mobile diving, and salvage elements, are the first line of response if a warship suffers serious damage, regardless of how it’s inflicted,” he writes.

“Their job is to contain the damage, stabilize the vessel, and ensure that it can be brought to one of the Navy’s regional maintenance centers or a public shipyard for more extensive repair work. … These kinds of skills would be paramount during any kind of large-scale conflict in which American warships were under threat, as well as in response to terror attacks or in other asymmetric scenarios,” he adds.

Rear Admiral Eric Ver Hage, commander of the Regional Maintenance Center and director of Surface Ship Maintenance and Modernization for NAVSEA (Naval Sea Systems Command), confirmed that “all of the NAVSEA commands (and) fleet commands were involved. They were able to cut metal, flood spaces, de-water spaces, patch the holes at sea; it was really, really realistic.”

More Work to Be Done

The commander also noted that the recent exercise was just one of many slated going forward. “We’re going to do more of that,” he said.

Ver Hage later used the 2000 bombing of the destroyer U.S.S. Cole and the fire on the U.S.S. Bonhomme Richard as examples that eventually drove him to focus more heavily on the need for the U.S. Navy to build upon its repair battle damage capabilities during both wartime and peacetime.

“Navy officials we interviewed generally agreed that the Navy could handle a single battle damage event but were uncertain how the Navy might handle multiple simultaneous or near-simultaneous events,” the report stated.