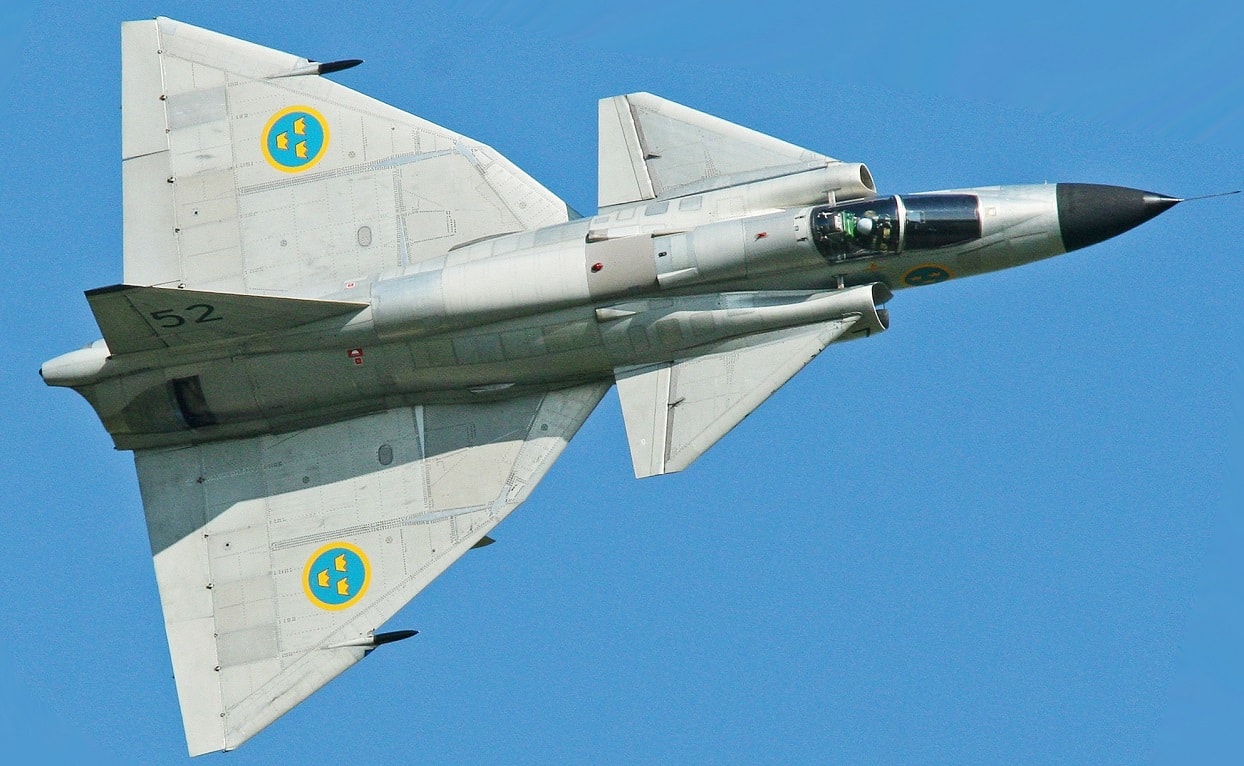 During the Cold War, Sweden developed a multitude of advanced aircraft. Swedish aircraft served not only in the Swedish Air Force, but also in the Austrian, Danish, and Finnish Air Forces. One of the most advanced designs in its time was the AJ 37 and AJS 37 “Viggen” strike aircraft.

The AJ 37 Viggen is the primary variant of the Viggen family of jets, which also includes patrol, trainer, and reconnaissance variants. It was designed to be a strike fighter from the outset, featuring an advanced navigation system (for the time), a ground-attack radar with a terrain avoidance features, and an advanced HUD to assist the pilots on doing pop up attacks.

Like the original Harrier, it was designed to be based close to the front and thus was designed with STOL functionality in mind. As a result, the airframe incorporates significant features to improve the STOL characteristics of the Viggen.

A thrust reverser allows for the Viggen to land within five hundred meters, the airframe is designed to touch down without flaring at low speeds to minimize damage to expedient fields and roads.

Smart design also meant the Viggen could rearm extremely quickly, turnaround times were clocked at under twenty minutes with conscript ground crews, maximizing the rapidity to which the Swedish Air Force could respond to an attack. It was estimated that aircraft could fly upwards of five sorties a day.

It was armed with Swedish rocket pods and bombs, the Rb 04E anti-ship cruise missile, and later on the Bk90 Mjölnir cluster munitions dispenser (in the AJS 37 variant). These gave it a formidable strike and anti-ship capability. It also could carry Rb 24 or Rb 74 Sidewinder IR missiles for self defense, and use the ground-attack radar in a limited air-to-air mode.

The AGM-65 “Maverick” was also integrated into the AJ 37 Viggen after it entered service. When it was integrated and advanced new type of display was used to display the image from the missile seeker at the head level of the pilot.

All of these weapons were heavily integrated into the avionics of the Viggen, going along with its strike focus. With rocket pods, the pilot could program an attack zone as a waypoint and the HUD would guide the pilot in for an attack on it.

Similarly, the avionics supported many different bombing modes for the general purpose bombs. Toss bombing, dive bombing, high and low drag methods all are programmed in, giving the pilot lots of flexibility when it came to bomb employment.

Likewise, the Rb 04E was integrated into the navigation computer and HUD, with ranging marks and effective range being displayed in the hud. The AJS 37 even integrated the advanced Rb 15F anti-ship missile, which could navigate to different waypoints to conduct swarm attacks and hit a ship from different angles.

On a typical attack run, the Viggen would move to its target fast and low. The powerful engine gave it the capability to go supersonic at low levels. At a low altitude, the AJ 37 Viggen was one of the fastest aircraft in the world.

The terrain following feature of the radar was also critically important and gave it all weather capability. In reduced visibility conditions the strike Viggens could carry out their mission without problem at low level. This would allow it to quickly dart in between mountains in the north of Sweden without being picked up on enemy air defense radars.

The Viggen is a prime example of Sweden’s ability to develop an advanced aircraft that was ahead of its time in many ways. Most NATO air forces would only get a similar attack/terrain-following radar to the one the Viggen had in 1979 with the Panavia Tornado. In a theoretical conflict Viggen squadrons would likely have inflicted casualties on Soviet battle groups attempting to pass into the Atlantic north of Sweden, or in the Baltic Sea to the south. 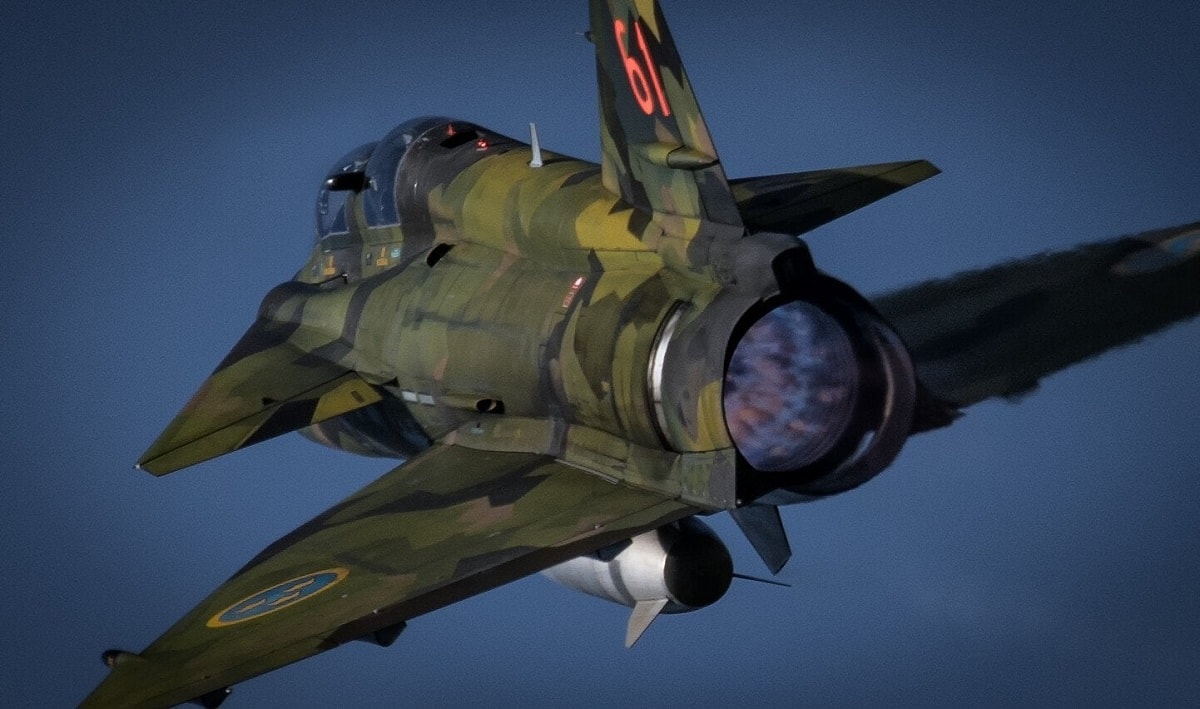 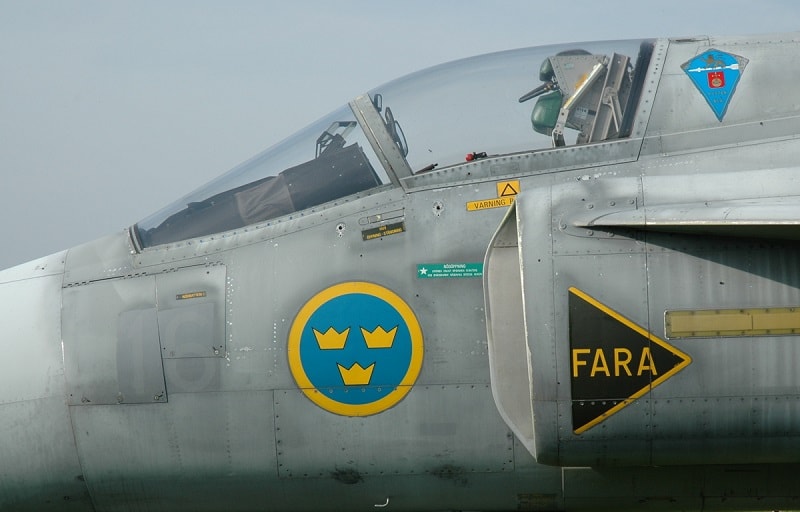 Closeup view of the cockpit and air intake of a JA 37 Viggen. 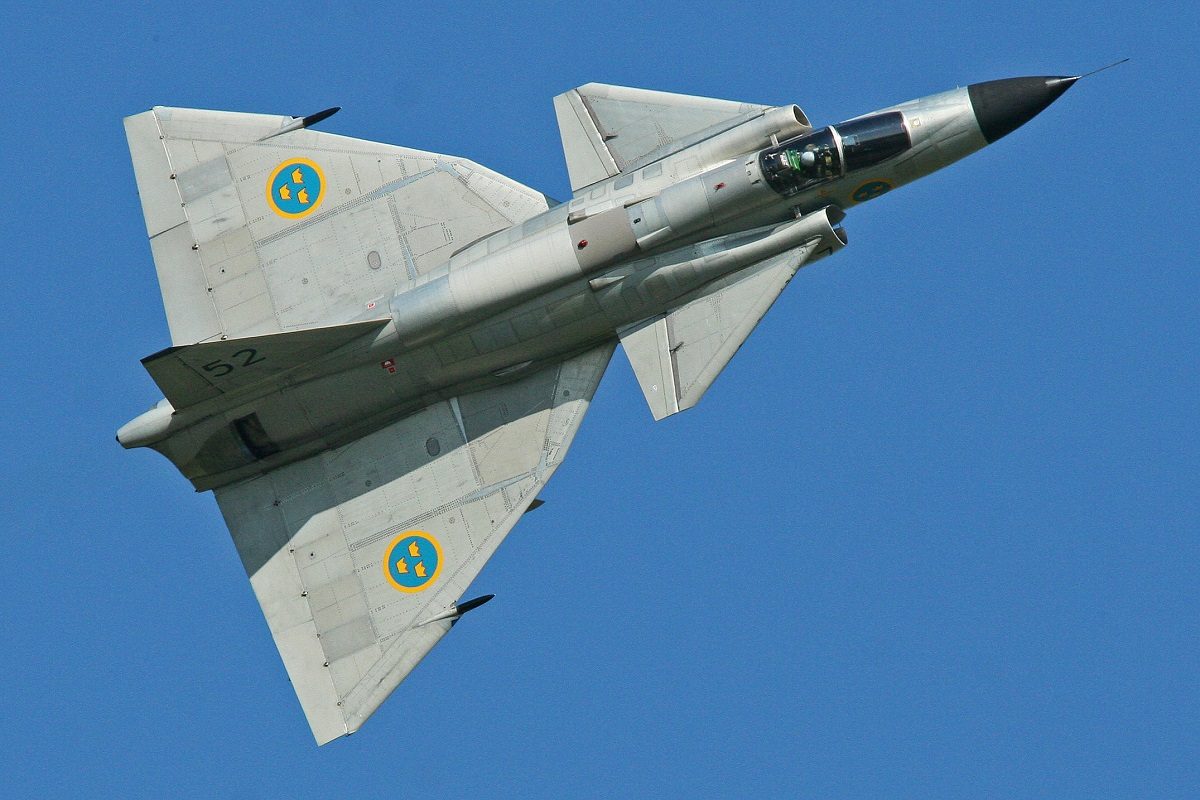 A nice topside view of the Viggen during its display at Waddington. The types unusual planform is well demonstrated here. She first flew after restoration in 2012, and has been active in Europe ever since, operated by the Swedish Air Force Heritage Flight. c/n 37-098. 2013 Waddington Airshow. 6-7-2013. Image: Creative Commons.

It also likely would have wreaked havoc on enemy ground forces with its rapid, hard-to-defend from popup rocket attacks. Fast rearm times and fast air speeds meant that Viggens would be able to have an effect on the battlefield outsize to their number in service.

Of course, such a rapid sortie schedule would have a terrible effect on the airframes of Viggens. But like most Cold War strike aircraft it was expected to have a very high attrition rate despite its advanced features. Swedish Cold War planners expected that the defense of Sweden would be a very rapid war, so the longevity of the airframe was a secondary concern.

Charlie Gao studied Political and Computer Science at Grinnell College and is a frequent commentator on defense and national-security issues.