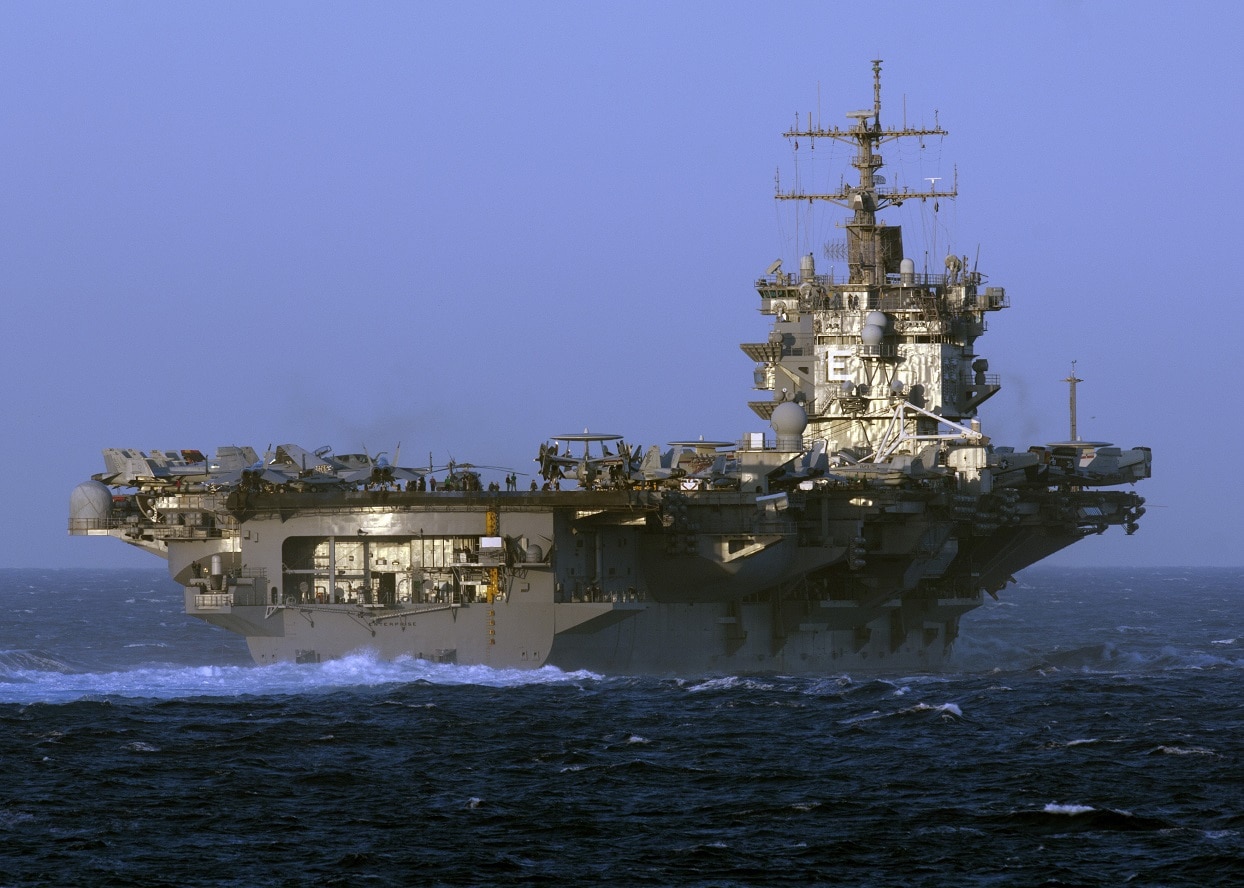 The aircraft carrier USS Enterprise (CVN 65) is underway in the Strait of Gibraltar. Enterprise is completing a deployment to the U.S. 5th and 6th Fleet areas of responsibility in support of maritime security operations and theater security cooperation efforts. The U.S. Navy has a 237-year heritage of defending freedom and projecting and protecting U.S. interests around the globe. Join the conversation on social media using #warfighting. (U.S. Navy photo by Mass Communication Specialist 3rd Class Daniel Meshel)

In August 1950 the chief of naval operations, Adm. Forrest Sherman, requested a feasibility study for nuclear-powered aircraft carriers. A shore-based nuclear reactor was built as a test, and based on the success of the so-called A1W reactor authorization, and funds for a nuclear carrier was approved in 1958.

USS Enterprise was commissioned in November 1961. It was 1,123 feet long, the longest aircraft carrier ever built, and displaced 93,284 tons fully loaded. Its eight A2W reactors, a development of the A1W, could together generate an amazing 280,000 shaft horsepower, driving Enterprise’s four propellers to a speed of more than thirty-five knots. The ship was manned by a crew of 5,500, including the air wing, and could carry eighty-five aircraft.

Enterprise followed the same design as its conventionally powered predecessors Kitty Hawk and Constellation. It had four catapults, two on the bow and two on the port waist, and four aircraft elevators. Its uniquely shaped superstructure was nicknamed “the beehive” and housed electronic countermeasures gear and SCANFAR, the world’s first shipboard phased-array radar consisting of the the SPS-32 and SPS-33 search radars.

A ship of many firsts, USS Enterprise may also have been the first aircraft carrier commissioned totally unarmed since the Navy’s first carrier, USS Langley. Originally designed to carry the Terrier surface-to-air missile, these were deleted from the ship’s final form to control costs. It was only in 1967 that two Mk. 25 Basic Point Defense Missile Systems launchers were installed, each with eight Sea Sparrow Missiles. These were replaced with Mk. 29 launchers later, and during the 1980s three Mk. 15 Phalanx Close-In Weapon Systems were added to the ship’s defenses.

Enterprise was home to many types of famous carrier-borne aircraft during its career, including F-4 Phantoms, F-14 Tomcats, A-1 Skyraiders, A-3 Skywarrior bombers, A-4 Skyhawks, A-5A Vigilantes and A-7 Crusaders. Originally designed as a Carrier, Attack, Nuclear, or CVAN, it was eventually redesignated as a multipurpose CVN. The last air wing to fly from the Enterprise was Carrier Air Wing One, which had four squadrons of F/A-18E/F Super Hornets.

Enterprise’s operational history began in 1962, when the ship participated in the blockade of Cuba during the Cuban Missile Crisis. In 1964, Enterprise participated in Operation Sea Orbit. Enterprise, the nuclear-powered guided missile cruiser USS Long Beach, and the nuclear-powered guided missile destroyer USS Bainbridge—collectively known as Task Force One—circumnavigated the globe in sixty-five days, steaming 30,565 miles on nuclear power. The operation proved that a nuclear-powered fleet could be fast and responsive, capable of moving quickly to crisis spots around the globe.

In 1965, Enterprise began air operations off Vietnam, delivering air strikes against Viet Cong and North Vietnamese targets. In 1968 it was flagship for Task Force 71, the response to the North Korean seizure of the spy ship USS Pueblo. Later that year it again flew air strikes in Southeast Asia. The “Big E” would conduct a total of six cruises off Vietnam, the last in 1975.

In 1969, while conducting readiness inspections off Hawaii, an aircraft rocket exploded on the flight deck, causing a fire. Nine bombs cooked off in the fire, killing twenty-eight crewmen and injuring 343 others. Fifteen aircraft were destroyed, including several brand-new A-7 Corsairs. Despite the terrible damage and casualties suffered, Enterprise could have enacted emergency repairs and resumed air operations within hours, but instead was sent to drydock in Hawaii.

The post-Vietnam era was relatively quiet for Enterprise until 1988, when its air wing sank an Iranian Saam-class frigate as part of Operation Praying Mantis, the U.S. response to Iran’s mining of the Persian Gulf. During the 1990s it enforced no-fly zones over Bosnia and Iraq. In October 2001 it flew some of the first air missions over Afghanistan, conducting air strikes against the Taliban and Al Qaeda forces.

Enterprise was deactivated on December 1, 2012. For the last five years it has been gradually prepared for disposal, stripped of military equipment and its reactors powered down. down. The ship will be formally decommissioned on February 3, 2017, in a private ceremony at the Newport News Shipyard in Virginia.

Enterprise proved the viability of nuclear power for aircraft carriers, but in hindsight that was the most forgettable of its achievements. it circled the globe three times, conducted twenty-five overseas cruises and completed an astonishing four hundred thousand aircraft landings in its lifetime. It flew combat missions from Vietnam to Afghanistan, and over its lifetime tens of thousands—if not hundreds of thousands—of sailors served as part of its crew.

The Navy has taken steps to ensure that the storied name of Enterprise lives on. In 2012, then-Secretary of the Navy Ray Mabus announced the third of the Gerald R. Ford–class carriers, CVN-80, will carry the Enterprise name well into the second half of the twenty-first century.