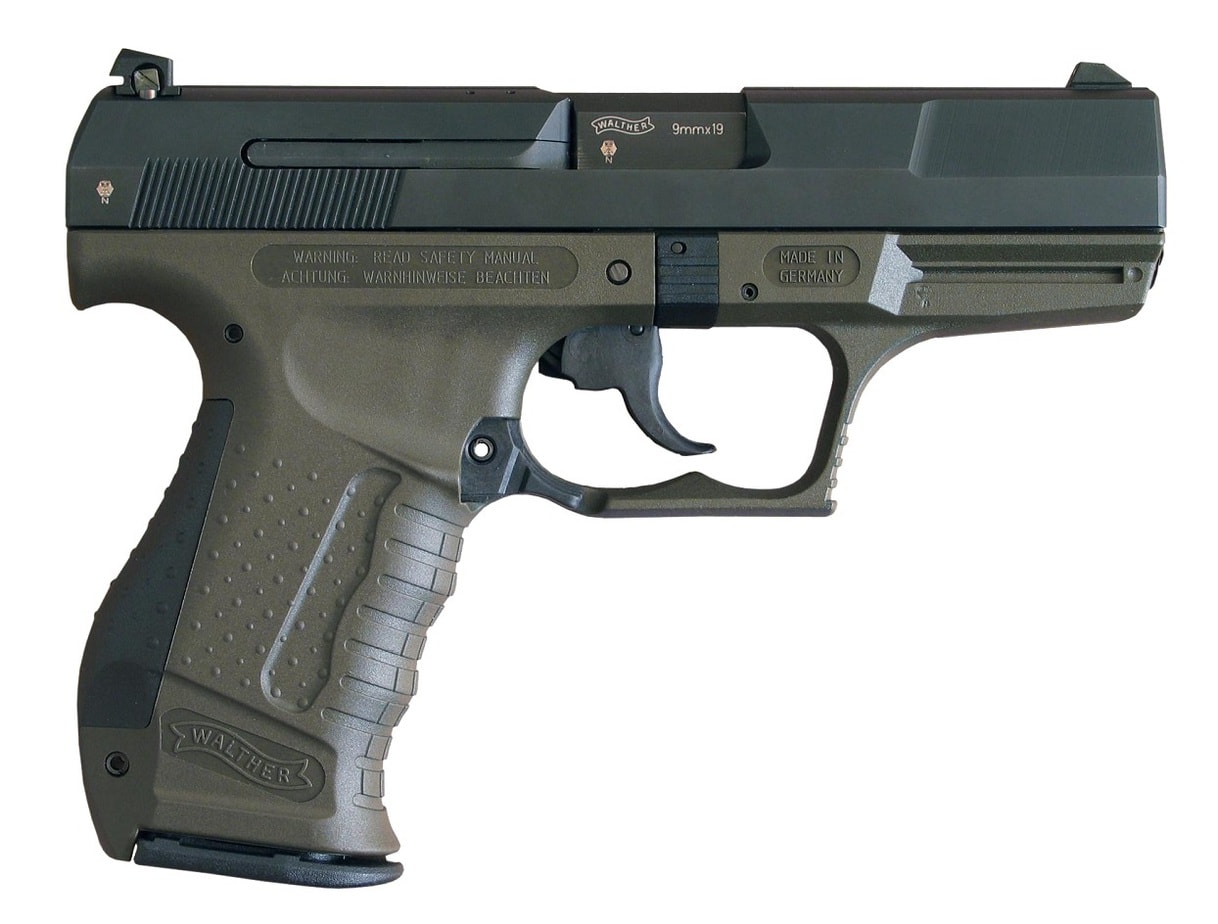 One of the most futuristic-looking handguns is also the product of one of Germany’s oldest firearm companies. The Walther P99, produced by Carl Walther GmbH, was originally designed as police pistol but has found commercial success in the United States and elsewhere. Although the basic design is two decades old, the P99 continues to be a popular handgun in the crowded nine millimeter market.

Carl Walther Waffenfabrik traces its lineage to the eighteenth century, when the company that would eventually becomes Walther was founded in central Germany. The company originally produced target rifles but moved into handguns in the early twentieth century. Produced for the German Army, the Model 6 was an enlarged version of the company’s pocket pistol chambered in 9 millimeter Parabellum. It had a longer barrel than previous versions, an eight round magazine, and an overall of 8.25 inches. The company later produced two now-famous pistols, the Walther Pistole Polezi-Kriminal, or Walther PPK, and the Walther P-38, adopted as the German Army sidearm during World War II.

In the 1990s the company pushed into the market for high capacity nine millimeter handguns with the Walther P99. Designed by former Glock and Steyr engineers, the P99 was also the company’s first handgun to use polymers for the frame/grip. (As late as 1988 the company was producing steel framed handguns with wooden grips—see the Walther P88.) Development of the P99 began in 1994 and was complete by 1996.

The P99 was an aggressive-looking handgun, with a large, textured grip, large trigger well, and grip angle that bent inward at the base. Walther’s new handgun, like the Glock, is a striker-fired handgun. The first shot is a double action shot with a nine round trigger pull while follow-up shots are single action with just a 4.5 pound trigger pull. Should the user wish to avoid the heavy initial double action trigger pull, he or she need only pull back the slide a quarter of an inch to switch into single action trigger mode.

The Walther P99 is available in two versions, a compact handgun 6.6 inches long and a full-size version 7.1-7.2 inches long. The pistol is available in three barrel lengths: 3.5 inches (compact) and 4 and 4.2 inches (full-size). The compact pistol weighs 21.5 ounces empty while the full sized weights 24 ounces. All versions are 1.3 inches wide.

Like many striker-fired pistols, the P99 has a total of three safeties: two internal drop safeties to prevent accidental discharge if the gun is dropped while loaded, with a third firing pin safety. It does not have a manual safety. Another safety feature is a spring-loaded decocker to take it back from single action to double-action mode.

The P99 has an unusual paddle-style manual magazine release at the base of the trigger well, an ambidextrous lever that protrudes on both sides of the pistol. This ensures that the user can drop an empty magazine with just a minimum of trigger finger movement, while the user can reach for and insert a fresh magazine with his or her non-pistol holding hand. The result is a handgun that can be quickly brought back into action in a high stress situation with a minimum of manipulation.

In addition to direct marketing by Walther, the P99 was also sold under agreement from 1999 to 2006 as the Smith & Wesson SW99. The Walther P99 received an upgrade in 2004, which included a set of three interchangeable backstraps to fit hands of varying sizes. The upgrade also saw the addition of a Picatinny rail under the barrel for attaching lights and other aiming devices.

Official use of the Walther P99 is limited, as the police/military market is dominated by Glock and, to a lesser extent, Sig Sauer and Heckler and Koch. The P99 is used by a number of German regional police forces and a number of police forces worldwide. It is also used by the Finnish Army. Already a two decade old design, the P99 is unlikely to be adopted by further armies and police agencies. Despite that, the pistol is still modern enough to hold its own in the civilian market. Although still sold by the company, Walther’s new Creed handgun looks poised to replace the P99. Despite this the new handgun doesn’t have the futuristic cachet of its predecessor, and the P99 may continue to stock gun store shelves for a few more years to come.