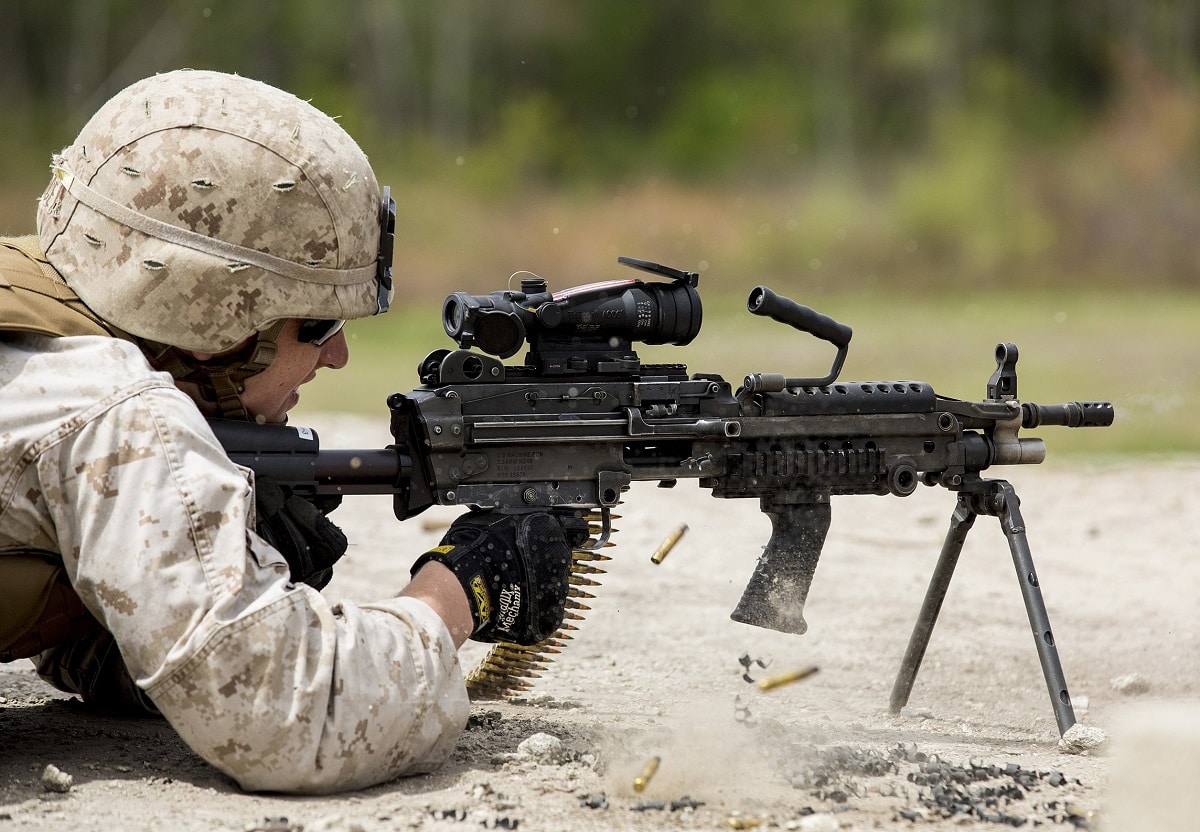 Somebody in an infantry squad needs to carry automatic firepower that can suppress the enemy while the fire team shoots, moves, and communicates. You can’t have a squad without the M249 SAW Light Machine Gun. SAW stands for squad automatic weapon and there are two in U.S. Army infantry squads – one for each fire team – and three in Marine Corps infantry squads for each marine fire team.

The SAW Has Numerous Advantages

The M249 SAW fires the NATO 5.56mm round. That is why at least 30 countries use it. It lacks the stopping power of the M60 machine gun that shoots a 7.62mm round, but after the Vietnam War, the U.S. military needed something lighter, shorter, and more portable. The SAW jumped into action in 1984. It was a variant of the Belgian FN (Fabrique Nationale) Minimi light machine gun. It can be fed by magazine, drum, or belt. The 5.56mm ammunition is a lot lighter and fires faster than the M60 rounds, although the M60 had a better range. The basic ammo load is 600 rounds of linked ammunition and it can engage in sustained fire at 200 rounds a minute.

The SAW, made by FN America Manufacturing, can hit a point target out to 800 meters and its maximum effective range is 1,000 meters for suppression purposes. It is usually fired in the prone position, but at only 22 pounds when loaded, a gunner can shoot it while standing. One could argue that the M60 was better in jungles in Southeast Asia, while the SAW worked better in the desert environments of the Middle East. This is because the 5.56mm round had difficulty penetrating the jungle foliage in Vietnam. This was less of a problem for the M60.

The SAW Is Difficult to Retire

In 2018, the Army was looking to replace the SAW with the “Next Generation Squad Automatic Rifle (NGSAR).” The Army tried out designs from six gun manufacturers. The testers wanted something even shorter and lighter at only 12 pounds and 35-inches long. They also wanted lighter ammunition – polymer casing instead of brass. The Army could never pull the trigger on the new designs. So, the SAW ended up sticking around. In fact, the Army granted a new contract to FN America for more SAWs in 2020, an agreement that will last until 2025. The gun will be made in Columbia, South Carolina.

Many Vietnam veterans are still nostalgic for the M60. They remember the assistant gunner carrying crisscrossed M60 ammo belts across his chest. It made for great photos and even inspired a bevy of Hollywood films. But the SAW is a good compromise. It doesn’t kick hard like the M60 and has a smoother recoil. Being able to fire it effectively while standing is a plus. It is light and easier to carry. The NATO round allowed U.S. allies to train with it and take it to Afghanistan. The SAW continues to roll with the punches and be a dependable gun for many Army infantry soldiers and marines.