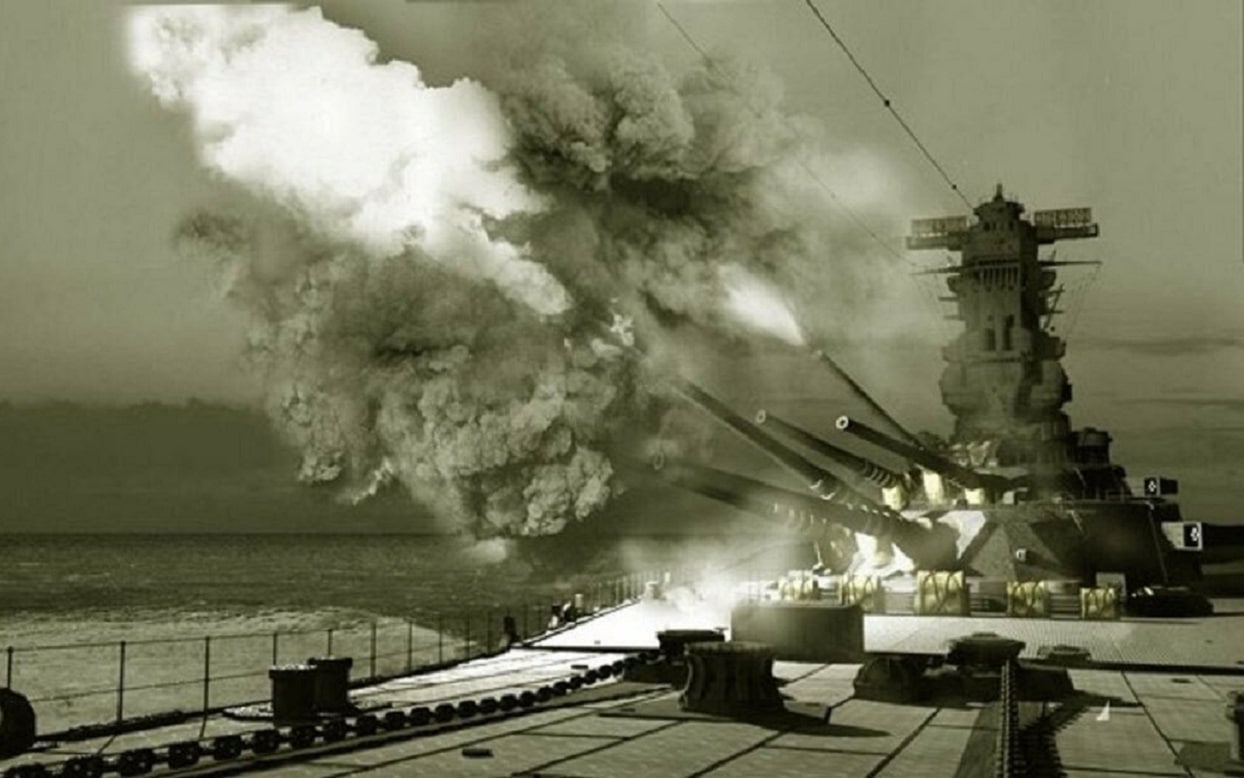 At least 23 designs were prepared between 1934, when plans for a new class of “super battleships” were first made, and 1937 when the two Yamato­-class warships were ordered. These would prove to be the most heavily armored warships ever built, but each would be armed with the 46 cm (18.1-inch) naval rifle guns.

These were the most powerful guns ever installed on a battleship, and while these may have matched the United States Navy’s 16-inch 50-caliber Mark 7 guns at long ranges, in close-range engagement the penetration power of the Japanese guns was believed to be unsurpassed.

Construction on the warships was attended by great secrecy, and great measures at Kure for Yamato, and Mitsubishi, Nagasaki for the sister ship Musashi were prepared. This included the erection of high fences, protective roofing, and even camouflage netting.

While every aspect of the two warships was meant to be kept secret, special attention was reportedly made to conceal the exact armament of the warships. In fact, according to NavWeaps.com, “These guns were officially designated by the Japanese as 40 cm/45 Type 94 (15.7 inch) in an effort to hide their actual size, which was a closely-guarded secret until after the end of World War II.”

The guns were designed in accordance with the prevailing Japanese naval strategy, which was known as Kantai Kessen, or the “Decisive Battle Doctrine.” It presupposed that Japan could win a war by fighting and winning a single, decisive naval action. Given the past conflicts with China in the First Sino-Japanese War (1894-1895) and the Russo-Japanese War of 1905 – where Japan did come out victorious in decisive naval actions – it was looking to achieve the same outcome when it would take on the United States.

Essential to such a victory was being able to “out-gun” and “out-fight” its adversary, and it was expected that no ship could match the firepower and broadside weight of the Yamato-class.

These guns reportedly had an unusually complex construction, which perhaps reflected the difficulty in manufacturing such a large caliber. Yet, in total, 27 guns were produced by the Japanese, yet only 18 were actually shipped and installed – nine on each of the two warships. The additional nine had been intended for the third vessel of the class, the Shinano, but she was converted into an aircraft carrier and was actually sunk before ever going into combat.

Yamato-class Guns: Limited Use in Combat

Despite the potential of the two super battleships, the truth was that the age of the battleship was already coming to an end, surpassed by the power of carrier-based aircraft. Both of the Imperial Japanese Navy’s warships actually had largely undistinguished combat carriers. This is in part because of a reluctance to hazard them without air cover, which Japan certainly lacked as the war went on.

No doubt the sinking of the Royal Navy’s H.M.S. Prince of Wales was a lesson that the days of a powerful battleship were coming to an end.

As a result, Yamato is known to have only fired at enemy ships on only one occasion, and neither of the warships ever were used in a battleship-to-battleship engagement. The combat record for Musashi is even worse, and she is reported to have only fired her guns once in anger when she used “sankaidan” (incendiary shrapnel) anti-aircraft shells during the Battle of the Sibuyan Sea in October 1944. It was even reported that one of the guns was damaged when a round exploded in the barrel.

In the end, both of the Imperial Japanese Navy’s super battleships were sunk by aircraft. Musashi took 11 to 19 torpedo strikes and at least 17 direct bomb hits before sinking in the Sibuyan Seal, while Yamato was sent on a suicide mission and was sunk by 11 to 15 torpedo strikes and at least seven direct bomb hits in the East China Sea on April 7, 1945.