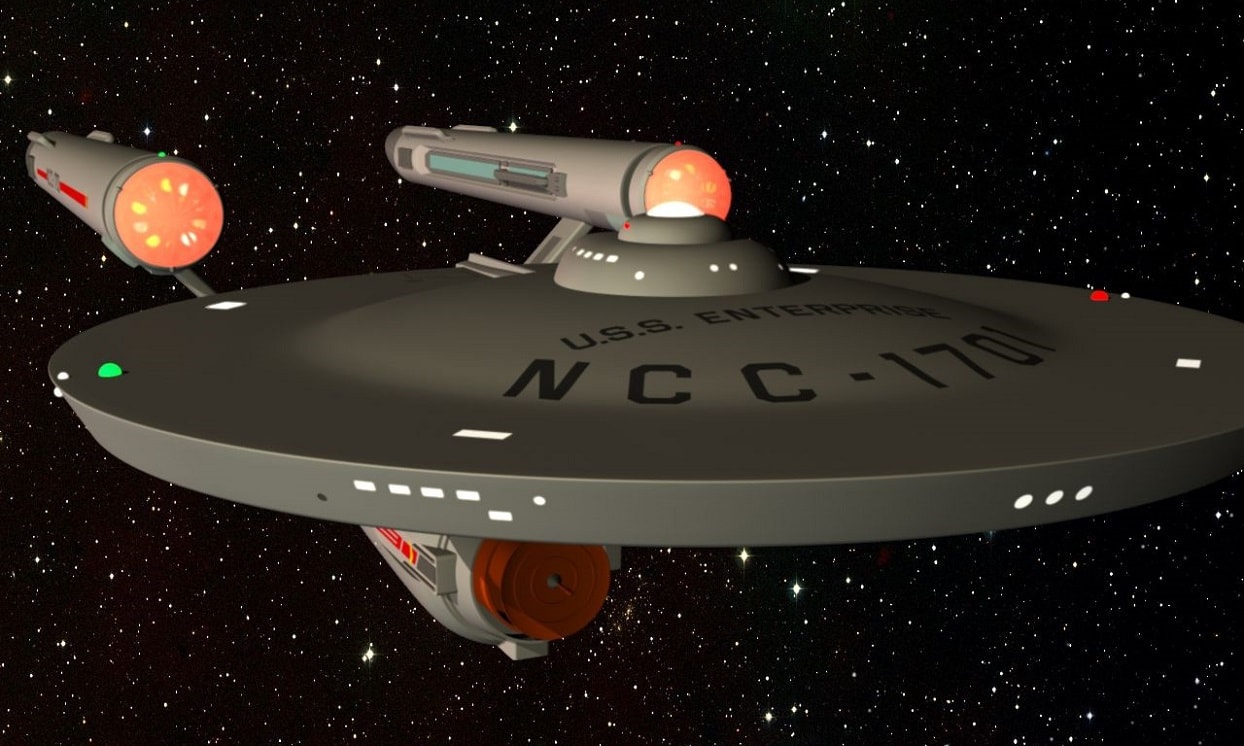 In Star Trek’s vision of the future, humanity has ended poverty, hunger and racism. In fact, all the worst aspects of human existence have been swept away — except war.

Warfare and weapons have been a prominent theme in Star Trek since the series debuted in 1966. Barrages of phasers and photon torpedoes erupt from starships traveling faster than the speed of light, only to be repelled by deflector shields that block their deadly energies.

Never mind that much of this is fantasy. Traveling faster than light is impossible, as far as we know (though not even the physicists are certain). Space is big, ships are small, and actual space combat would be closer to a game of hide-and-seek than the battle of Jutland or Leyte Gulf (for a fascinating interview I had with a real naval expert, see this).

Nonetheless, Star Trek and Star Wars have shaped popular perceptions of space warfare. Sometimes for good, sometimes for bad. But either way,  some of those Star Trek weapons would make the Pentagon’s day. Consider these:

Stealth has become the overriding design feature of America’s most advanced warplanes, such as the F-22, F-35 and B-2. But invisibility — the ultimate stealth — was portrayed as a tactical system back in 1966, when Captain Kirk and the Enterprise first encountered the Romulan cloaking device in the episode “Balance of Terror.”

An invisible warship has enormous flexibility, not just as a weapons system but also as a transport or reconnaissance vessel. It can get close to a target, or evade enemy weapons. Because adversaries can never be sure of detecting a cloaked ship, they must work on the assumption that hidden ships may attack or are spying on them at any moment, thus creating a force multiplier effect far out of proportion to the actual battlefield capabilities of the invisibility screen.

At least that’s how it works in theory. “Balance of Terror” is a perfect allegory for the worst fears about America’s stealth aircraft. Remember that while the Romulan ship was cloaked, it could still be tracked well enough for the Enterprise to fire at it. Not with pinpoint accuracy, but well enough to damage the Bird of Prey. The Romulan ship also sacrifices much in capability to retain stealth, notably the fact that the cloaking device consumes so much power that it must uncloak to fire its weapons.

Critics say the F-35’s stealth can be defeated, and that it has given up so many capabilities in the name of stealth that it will be a lackluster fighter at best. Perhaps the designers should have talked to the Romulans first.

The Pentagon is spending billions to develop a Prompt Global Strike missile that can land anywhere in the world within one hour. But how about dropping a bomb instantaneously? That’s exactly what the Star Trek transporter could do. An instantaneous delivery system that should be able to dispatch bombs as easily as people and cargo.

It would also seem to be a useful device for scattering mines in front of enemy ships moving at interstellar speeds. Curiously, Star Trek ships don’t really scatter mines as tactical weapons on TV and the movies, though the ships in the Star Fleet Command computer and Star Fleet Battles paper wargame use mines quite readily.

Perhaps the people who would most love the transporter would be the Special Operations commandos, for whom just getting to a remote or heavily defended location is half the battle. Instead of slogging through the jungle or hoping some jihadi with a rifle doesn’t shoot down your helicopter, wouldn’t it be nice to have Scotty beam you down into the Al Qaeda base?

On the other hand, if Al Qaeda has transporters, the Department of Homeland Security’s job becomes much more interesting.

“Balance of Terror” was perhaps the most influential TV episode for space warfare. Not only did it unveil the cloaking device, but the Romulan plasma torpedo as well.

The plasma torpedo seems like a cross between those big Chinese missiles designed to kill aircraft carriers, and the massive U.S. bunker-buster bombs like the 15-ton Massive Ordnance Penetrator (MOP). Except that where the MOP destroys bunkers and tunnels, the plasma torpedo could disintegrate not just a Federation outpost dug a mile deep under an asteroid, but the entire asteroid as well.

Spock describes the torpedo as an “enveloping energy plasma, forcing an implosion.” Its technical details aren’t discussed in detail, but it obviously has a guidance system and faster-than-light capability to chase the Enterprise at warp speed. It does appear to be a short-ranged weapon (at least by interstellar standards); by the time it hits a fleeing Enterprise, enough of its energy has dissipated to allow the ship to survive.

The Borg Cube is in many ways the perfect weapon. Not only does it destroy enemy ships. It assimilates them and their crews, thus enhancing Borg military resources while reducing the enemy’s. In that sense, it is not just a conventional warship. It is a psychological operations (Psyops) system, except that instead of converting the enemy through propaganda, the Borg convert them by implanting control units in their brains.

In a way, the Borg way of war harkens back to the days of Earth’s Thirty Years War of the 17th Century, as well as Napoleon’s armies. Those soldiers lived off the land by plundering supplies from farms and villages, preferably — though not always — in enemy territory. By assimilating the people and machines of their enemies, the Borg can essentially supply themselves indefinitely.

The most awesome and most insane of Star Trek weapons, the Doomsday Machine was a giant robotic ship built by a race in another galaxy. It was supposed to destroy enemy planets and then digest them for fuel, thus giving it infinite range. Unfortunately, it also destroyed the planets of the race that built it.