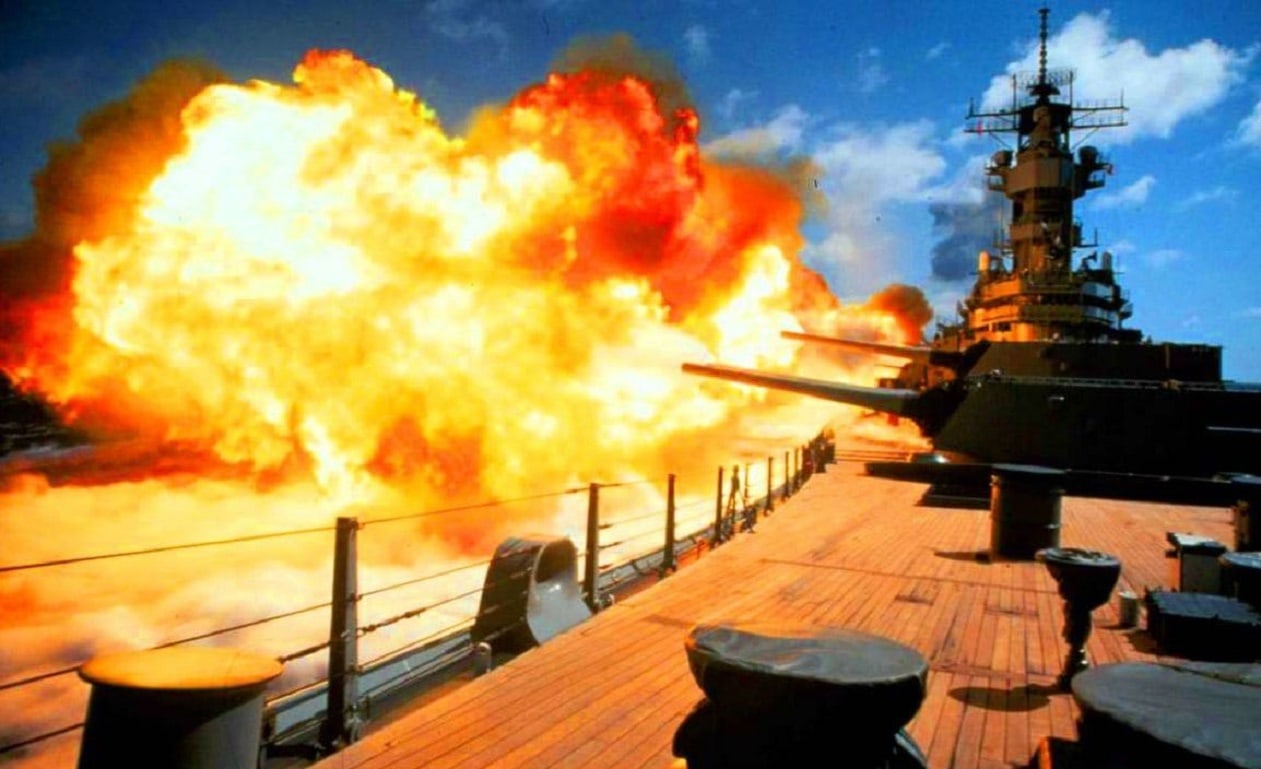 There’s a mystique to battleships. Whenever inside-the-Beltway dwellers debate how to bulk up the U.S. Navy fleet, odds are sentimentalists will clamor to return the Iowa-class dreadnoughts to service. Nor is the idea of bringing back grizzled World War II veterans as zany as it sounds. We aren’t talking equipping the 1914-vintage USS Texas with superweapons to blast the Soviet Navy, or resurrecting the sunken Imperial Japanese Navy superbattleship Yamato for duty in outer space, or keeping USS Missouri battleworthy in case aliens menace the Hawaiian Islands. Such proposals are not mere whimsy.

Built to duel Japan in World War II, in fact, battleships were recommissioned for the Korean War, the Vietnam War, and the Cold War. The last returned to action in 1988. The Iowa class sat in mothballs for about three decades after Korea (except for USS New Jersey, which returned to duty briefly during the Vietnam War). That’s about how long the battlewagons have been in retirement since the Cold War. History thus seems to indicate they could stage yet another comeback. At this remove from their past lives, though, it’s doubtful in the extreme that the operational return on investment would repay the cost, effort, and human capital necessary to bring them back to life.

Numbers deceive. It cost the U.S. Navy $1.7 billion in 1988 dollars to put four battlewagons back in service during the Reagan naval buildup. That comes to about $878 million per hull in 2017 dollars. This figure implies the navy could refurbish two ships bristling with firepower for the price of one Arleigh Burke-class destroyer. One copy of the latest-model Burke will set the taxpayers back $1.9 billion according to Congressional Budget Office figures. Two for the price of one: a low, low price! Or, better yet, the navy could get two battlewagons for the price of three littoral combat ships—the modern equivalent of gunboats. Sounds like a good deal all around.

But colossal practical difficulties would work against reactivating the dreadnoughts at low cost, despite these superficially plausible figures. First of all, the vessels no longer belong to the U.S. Navy. They’re museums. New Jersey and Missouri were struck from the navy list during the 1990s. Engineers preserved Iowa and Wisconsin in “reactivation” status for quite some time, meaning they hypothetically could return to duty. But they too were struck from the rolls, in 2006. Sure, the U.S. government could probably get them back during a national emergency, but resolving legal complications would consume time and money in peacetime.

Second, chronological age matters. A standard talking point among battleship enthusiasts holds that the Iowas resemble a little old lady’s car, an aged auto with little mileage on the odometer. A used-car salesman would laud its longevity, assuring would-be buyers they could put lots more miles on it. This too makes intuitive sense. My old ship, USS Wisconsin, amassed just fourteen years of steaming time despite deploying for World War II, Korea, and Desert Storm. At a time when the U.S. Navy hopes to wring fifty years of life out of aircraft carriers and forty out of cruisers and destroyers, refitted battleships could seemingly serve for decades to come.

And it is true: stout battleship hulls could doubtless withstand the rigors of sea service. But what about their internals? Mechanical age tells only part of the story. Had the Iowa class remained in continuous service, with regular upkeep and overhauls, they probably could have steamed around for decades. After all, the World War II flattop USS Lexington served until 1991, the same year the Iowas retired. But they didn’t get that treatment during the decades they spent slumbering. As a consequence, battleships were already hard ships to maintain a quarter-century ago. Sailors had to scavenge spares from still older battleships. Machinists, welders, and shipfitters were constantly on the go fabricating replacements for worn-out parts dating from the 1930s or 1940s.

This problem would be still worse another quarter-century on, and a decade-plus after the navy stopped preserving the vessels and their innards. Managing that problem would be far more expensive. An old joke among yachtsmen holds that a boat is a hole in the water into which the owner dumps money. A battleship would represent a far bigger hole in the water, devouring taxpayer dollars in bulk. Even if the U.S. Navy could reactivate the Iowas for a pittance, the cost of operating and maintaining them could prove prohibitive. That’s why they were shut down in the 1990s, and time has done nothing to ease that remorseless logic.

Third, what about the big guns the Iowa class sports—naval rifles able to fling projectiles weighing the same as a VW Bug over twenty miles? These are the battleships’ signature weapon, and there is no counterpart to them in today’s fleet. Massive firepower might seem to justify the expense of recommissioning and maintaining the ships. But gun barrels wear out after being fired enough times. No one has manufactured replacement barrels for 16-inch, 50-caliber guns in decades, and the inventory of spares has evidently been scrapped or donated to museums. That shortage would cap the battleships’ combat usefulness.

Nor, evidently, is there any safe ammunition for battleship big guns to fire. We used 1950s-vintage 16-inch rounds and powder during the 1980s and 1990s. Any such rounds still in existence are now over sixty years old, while the U.S. Navy is apparently looking to demilitarize and dispose of them. Gearing up to produce barrels and ammunition in small batches would represent a nonstarter for defense firms. The navy recently canceled the destroyer USS Zumwalt’s advanced gun rounds because costs spiraled above $800,000 apiece. That was a function of ordering few munitions for what is just a three-ship class. Ammunition was simply unaffordable. Modernized Iowas would find themselves in the same predicament, if not more so.

And lastly, it’s unclear where the U.S. Navy would find the human expertise to operate 16-inch gun turrets or the M-type Babcock & Wilcox boilers that propel and power battleships. No one has trained on these systems since 1991, meaning experts in using and maintaining them have, ahem, aged and grown rusty at their profession. Heck, steam engineers are in short supply, full stop, as the navy turns to electric drive, gas turbines, and diesel engines to propel its ships. Older amphibious helicopter docks (LHDs) are steam-powered, but even this contingent is getting a gradual divorce from steam as newer LHDs driven by gas turbines join the fleet while their steam-propelled forebears approach decommissioning.

Steam isn’t dead, then, but it is a technology of the past—just like 16-inch guns. Technicians are few and dwindling in numbers while battleship crews would demand them in large numbers. I rank among the youngest mariners to have operated battleship guns and propulsion-plant machinery in yesteryear, and trust me, folks: you don’t want the U.S. Navy conscripting me to regain my proficiency in engineering and weapons after twenty-six years away from it, let alone training youngsters to operate elderly hardware themselves. In short, it’s as tough to regenerate human capital as it is to rejuvenate the material dimension after a long lapse. The human factor—all by itself—could constitute a showstopper for battleship reactivation.

Battleships still have much to contribute to fleet design, just not as active surface combatants. Alfred Thayer Mahan describes a capital ship—the core of any battle fleet—as a vessel able to dish out and absorb punishment against a peer navy. While surface combatants pack plenty of offensive punch nowadays, the innate capacity to take a punch is something that has been lost in today’s lightly armored warships. Naval architects could do worse than study the battleships’ history and design philosophy, rediscovering what it means to construct a true capital ship. The U.S. Navy would be better off for their inquiry.

Let’s learn what we can from the past—but leave battleship reactivation to science fiction.

James Holmes is J. C. Wylie Chair of Maritime Strategy at the Naval War College. The views expressed here are his own.