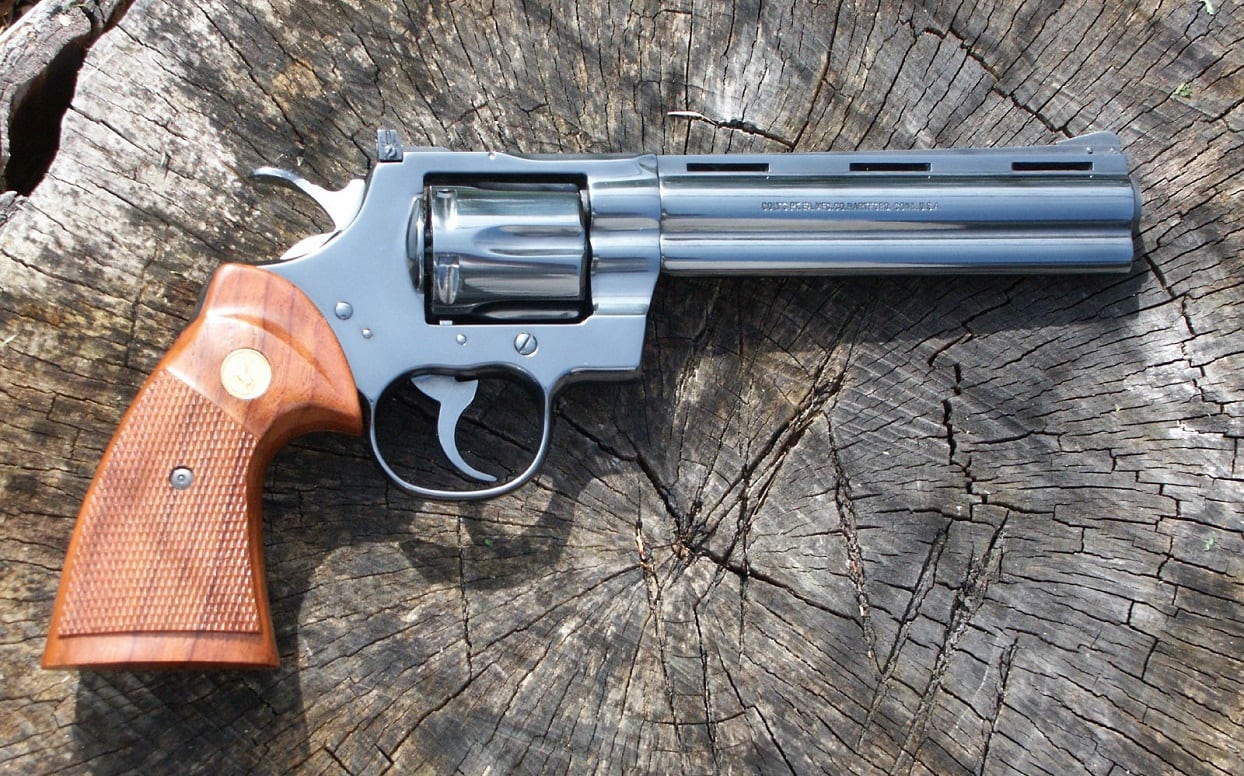 Colt Python,  A Short Primer: Colt is one of the United States’ oldest firearm manufacturers. Founded by Samuel Colt in 1855, the company built upon and improved older firearm designs that Colt had patented in the mid-1830s and is one of the companies responsible for moving firearm design from single-shot pistols and toward multi-shot revolvers.

Though the company’s current firearms have long since eclipsed their earlier designs, Colt still manufactures revolvers — and theirs are some of the best on the market. One of their revolvers, the Colt Python, is a particularly potent design.

The Colt Python made its debut in 1955, when Colt introduced the revolver as a high-quality, premium line revolver. The company produced the revolver for nearly fifty years, though discontinued the Python line in 1999 as a money-saving measure. Colt resurrected the design in 2020 however, and the Python revolver is currently available in two main variants, a 4.25-inch barrel variant, as well as a 6-inch barrel variant.

The Python is immediately recognizable thanks to its full-length under-barrel lug, as well as the ventilation slots cut above the barrel which slightly aid in dissipating heat generated during firing. Out of the box, the Python comes with checkered wooden grips that are reminiscent of early revolver grips which tended to be wider at the base than today’s contoured synthetic grips.

The cartridge versatility offered by revolvers chambered in .357 Magnum/.38 Special is particularly useful to shooters that would like less recoil than what the .357 Magnum generates, or plinkers wanting a more affordable cartridge when out at the range.

Though the Colt Python is indeed a well-made and a high-quality firearm, it is not without its detractors. One of the most significant criticisms of the revolver is its relatively high weight. Heavier firearms are naturally more comfortable to shoot, as increased mass helps to mitigate recoil and muzzle rise. They are however, just plain heavier and therefore less maneuverable and offer slower target acquisition.

In sum, the Colt Python is a very high-quality revolver — though with a high price point. Colt lists the Python’s retail value on their website at $1,500. Still, considering Colt’s many years of gunsmithing experience, there’s no doubt that the Python is a powerful — and high quality — .357 Magnum revolver.