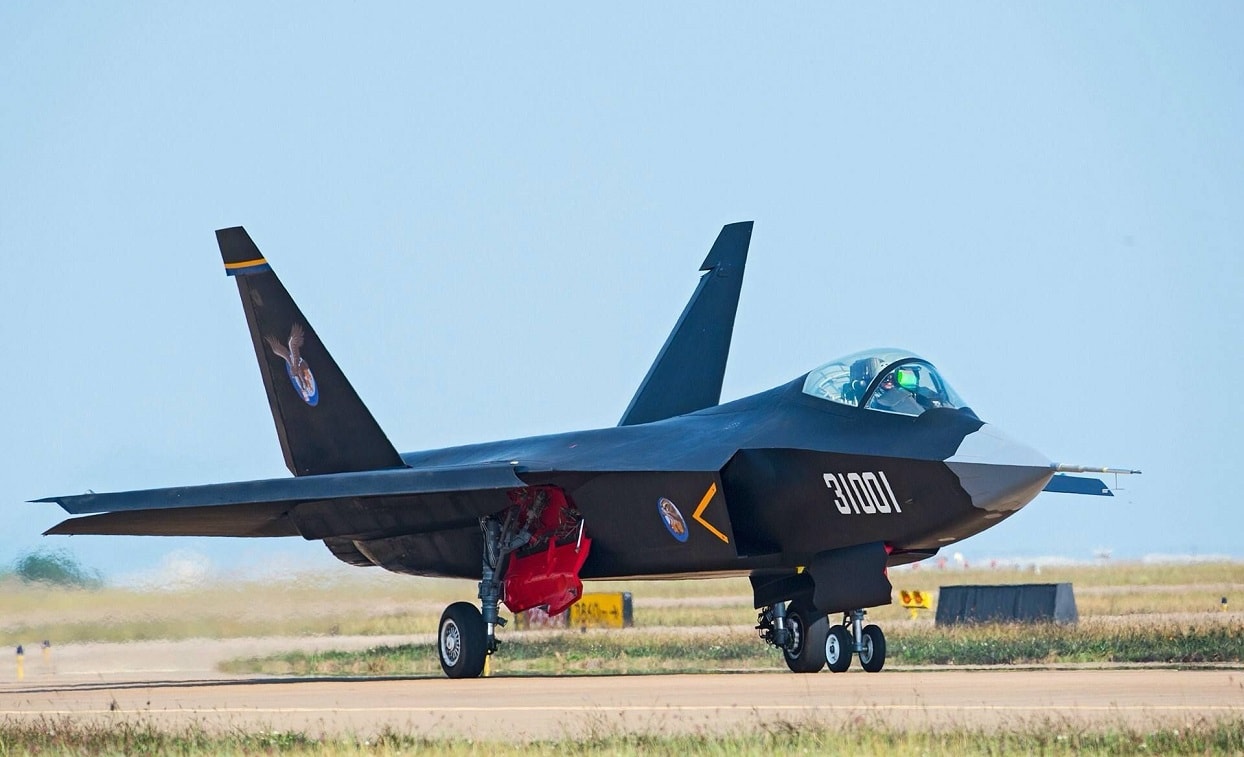 A feared aircraft in its own right, it has now expanded its capabilities by becoming carrier-capable, which gives China’s fast-growing naval fleet a much-needed stealthy multi-role fighter.

According to defense writers at the War Zone, “photos beginning to appear on social media apparently show, beyond little doubt, the carrier version of China’s Shenyang FC-31 stealth fighter, which is expected to play a vital role in the continued and impressive development of the People’s Liberation Army Navy (PLAN) carrier force.”

They continue: “While we have previously seen an apparent mockup of the jet—the first stealthy carrier-capable fighter to be developed outside the United States—the new images show a prototype flying for what may well be the first time. … Wearing a blue-green primer finish, the new jet has the same twin canted tailfins, twin engines, and high-mounted cockpit of the FC-31, but adds a catapult launch bar and a wing-fold mechanism, confirming it’s intended for carrier operations.”

“Other notable features are a chin-mounted sensor turret, apparently analogous to the F-35’s Electro-Optical Targeting System (EOTS), and what seems to be a remodeled cockpit canopy profile, with a shorter main transparency,” they add.

As for the designation of the new carrier fighter, that is still unknown. There, however, has been speculation that it could be called the J-31 or J-35.

There also seems to be a vision on which type of carrier it will engage on its missions.

“Being equipped for catapult operations for the outset, the new fighter seems certain to be intended to operate from the forthcoming Type 003 carrier—the third for the PLAN, and the first to have a distinctly domestic design. The Type 003 design is expected to be equipped with an electromagnetic aircraft launch system (EMALS), rather than relying on the ski-jump ramps used on the PLAN’s previous two carriers, the Liaoning and Shandong,” the writers note.

“While construction of the Type 003 carrier continues to make rapid progress, a carrier-capable naval version of the FC-31 has long been rumored. This would provide a stealthy complement to the Shenyang J-15, a Chinese-made Sukhoi Flanker derivative that’s in service with the PLAN today, and which goes to sea aboard its first two carriers. A catapult-capable variant of this aircraft has been in testing for some time,” they continue.

It is widely believed that the new carrier jet is still in the early stages of development, “but its low-observable features and modern characteristics overall would provide the PLAN with a significant new capability to match its power-projection ambitions. However, spinning off the FC-31 into a carrier fighter was likely the plan all along, and its development will benefit greatly from nearly a decade of testing and evolution of its land-based progenitor.”