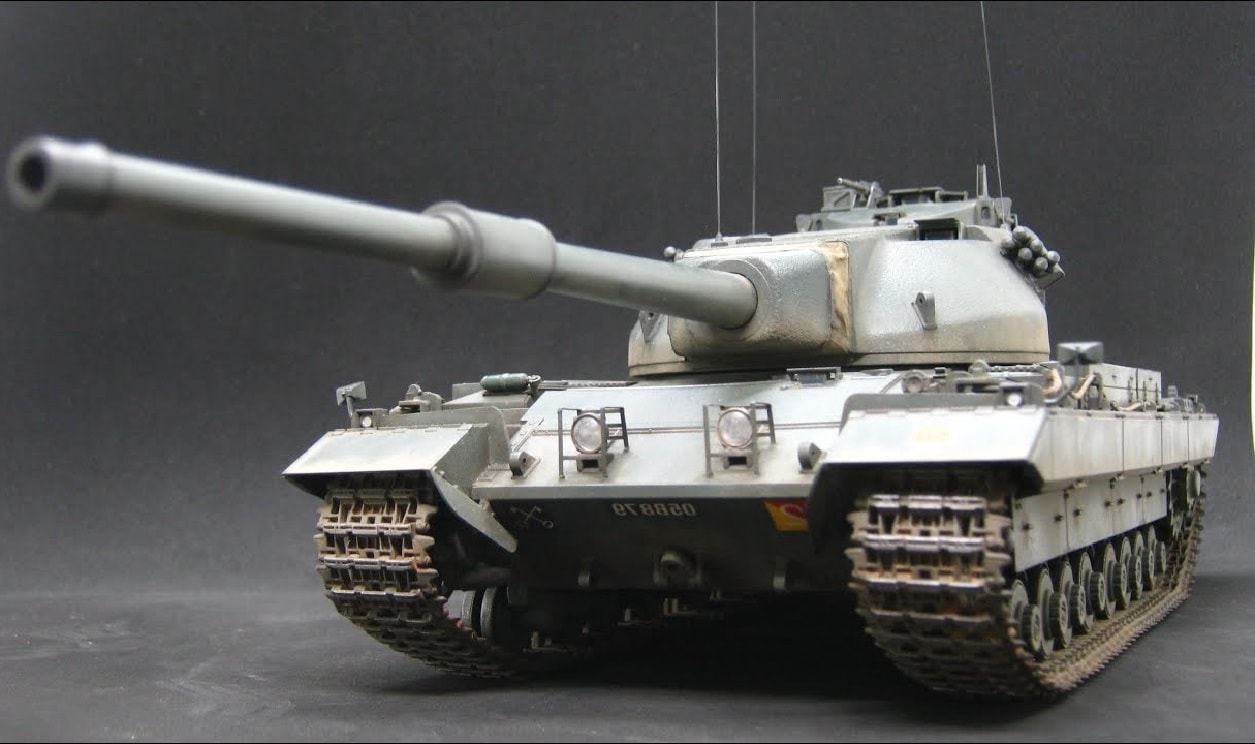 Immediately after the surrender of Germany, the Soviet Union unveiled the powerful IS-3 heavy tank, shocking Allied onlookers. At its thickest point, the IS-3’s armor was nearly 8 inches thick, afforded by the tank’s innovative pointed front glacis which allowed for thick armor protection at less of a cost in weight. Typical for Russian tank designs, the IS-3 was a low-profile tank that stood a paltry 8 feet tall and presented a rather small silhouette to the enemy despite its large size.

Not only was it incredibly well-armored for the time, but the IS-3’s turret also sported an enormous 122mm main gun that originally entered service as a field gun and was later adapted by Soviet engineers to fit inside the IS-3’s squat turret. Needless to say, the IS-3 shocked the British into action.

Unlike the British forces, the United States did not pursue a dedicated heavy tank design during the war, in part due to the painfully long supply lines that stretched from North America to Europe. Instead, they opted mostly for medium tanks that could support infantry. In order to take on heavily-armored axis tanks, the United States relied mostly upon tank destroyers like the M10 to smash through heavily-armored Nazi German armored forces.

The British, however, took an altogether different tack.

A certain British War Minister described their resulting heavy tank design as “probably the most powerful tank in the world,” and at the time, that wasn’t necessarily an overstatement.

The Conqueror frontal sloped armor was 7 inches thick, though because of its steep slope angle, presented a 10-inch thick face, easily making it one of the most heavily-protected tanks of the immediate post-Second World War era. And like the IS-3, the Conqueror also sported an enormous 120mm main gun, along with two medium machine guns.

Unfortunately, that firepower and armor protection came at a cost: The Conqueror was about 65 tons. The tank’s weight coupled with an underpowered 810 horsepower gasoline engine translated into a powerful and well-protected but not particularly fast armored platform that had a rather limited operational range. Still, the Conqueror performed rather well off-road in part due to its relatively high suspension as well as its wide tracks affording the Conqueror low ground pressure.

One of the Conqueror’s more unique features was its commander’s cupola which sat on top of the turret. While manning the position, a Conqueror commander could independently rotate the cupola, locating and calling out targets for the tank’s gunner. While the gunner aimed and took out the called-out targets, the commander was free to find other targets, greatly increasing the rate of effective fire the Conqueror was capable of.

Ultimately the Conqueror did not see combat with its IS-3 rival as was anticipated by its British designers. Other tanks like the capable Centurion main battle tank would ultimately prove to be more capable and well-rounded tanks than the Conqueror. Indeed, heavy tanks would fall out of use with most NATO countries in favor of the Main Battle Tank doctrine which called for jack-of-all-trades tanks that combined high firepower with good armor protection and mobility. Still, despite the Conqueror’s shortcomings, it may have indeed been the most powerful tank in the world, for a short time.