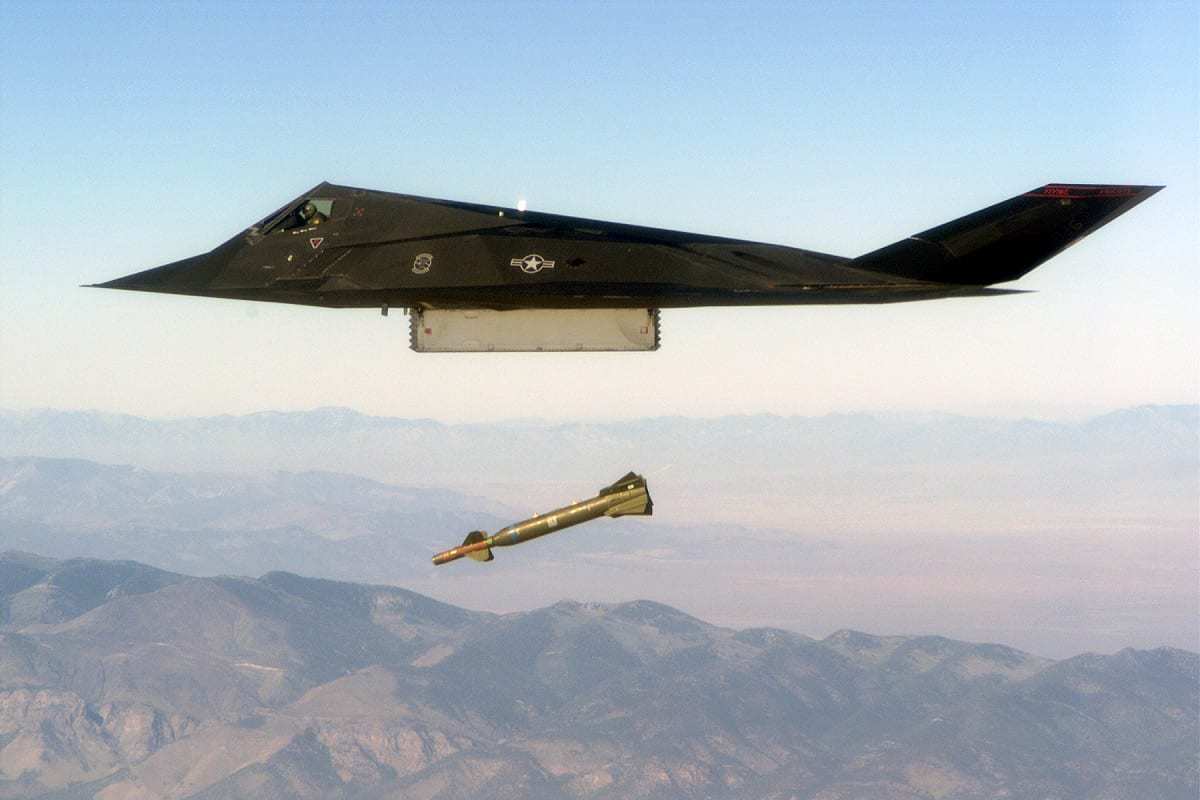 F-117 Stealth Fighter, A Short History: In order to counter Soviet air defenses, Lockheed dreamed up the world’s first stealthy airplane, the F-117, which is still used today in a very limited capacity.

The Lockheed F-117 was a product of the Vietnam War. During Vietnam, The United States lost a number of both fighters and bombers due to North Vietnamese surface-to-air missiles supplied by the Soviet Union.

The Yom Kippur War in 1973 was also a learning curve for American planners — Israel had lost over a hundred airframes in a matter of weeks, again mostly due to Soviet-supplied surface-to-air missiles.

It became apparent to the United States’ war planners that if NATO bombers and fighters were to fly against the Warsaw Pact, a massive amount of airframes would be lost due to the Soviet Union’s extensive surface-to-air missile and anti-aircraft arsenals, which would likely be networked together to more effectively fight-flight groups. Something had to be done.

Lockheed designed the first operational airplane with stealth characteristics through the use of faceting, a design process in which an “aircraft surface reflects 99.99 percent of the reflected radar energy from the radar source away from its receiver.”

In order to keep production costs low, Lockheed’s Skunk Works used a number of off-the-shelf components to deliver the F-117 in a very short amount of time. “The jet engines were out of a Northrup T-38A Talon,” a jet trainer. “The landing gear was from the Fairchild/Republic A-10A Thunderbolt II. And the environmental systems were taken from the Lockheed C-130 Hercules.”

Although the design Lockheed came up with was indeed stealthy, that is, it successfully reflected nearly all radar energy, it was very aerodynamically unstable. This was solved by using the “The fly-by-wire components…from the General Dynamics F-16,” which were essentially a quadruple-redundant computer system that made minute adjustments to the airframe’s control surfaces to allow for stable, even flight.

One of the pioneering aspects of the F-117 was the engine intake inlet. The inlet has a radar-absorbing grid on the outside. When seen through radar, the inlet appears like a flat panel, which reflects or absorbs the majority of radar. Any radar that makes its way into the inlet is bounced around inside an S-shaped air intake and is absorbed by a radar-absorbent coating, greatly reducing the chance that any radar is then reflected outwards.

The engine exhaust is also unique. The exhaust nozzles (known as the Platypus), are flattened, to spread out the exhaust, cooling it and reducing the infrared signature to a low enough degree that infrared detectors can’t track via the exhaust.

Due to installing readily-available components, Lockheed built two technology demonstrators under-budget and early for just 35 million dollars — a feat even more remarkable when considering the massive costs of the F-35 Lightning II program.

Although the F-117 fleet is retired, a number of airframes have been Congressionally mandated to stay in a state of readiness — essentially in flyable condition. Retired F-117s are used to test radar and radar-absorbent material as test platforms, or possibly as aggressor aircraft for pilot training.

As recently as March of 2020, at least one F-117 was seen flying by an amateur photographer and plane spotter. The F-117s are flying again.