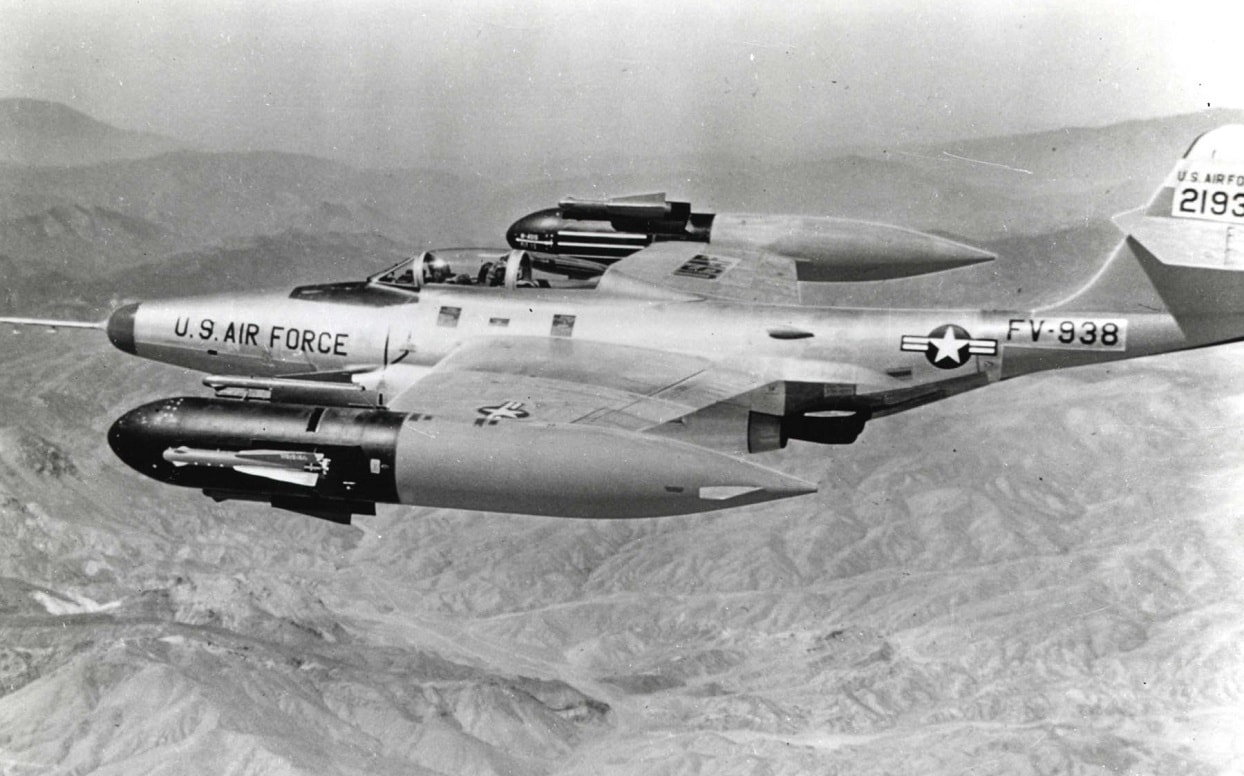 To that end, it was outfitted with dual Allison J35-A-35A Turbojet engines that produced 5,600 pounds of thrust each, which jumped up to 7,400 pounds of thrust with afterburner — at the time, a respectable amount of thrust for a small airplane. Top speed 465 miles per hour.

The little plane was known as the Scorpion by its developers, on account of its high rear tail assembly and wingtip fuel pods, which gave the aircraft the appearance of a scorpion ready to strike. The name eventually stuck, and was even adopted by the U.S. Air Force.

Northrop outfitted the airplane with two ejection seats for both the pilot as well as the radar operator. During flight, the radarman, seated at the rear, would direct the pilot towards whatever targets appeared on his radar screen, with the pilot and ranking officer responsible for ultimately shooting down whatever they flew against.

Although the Scorpion was outfitted with two jet engines, the airframe retained the straight wings which were more typical of older propeller airplanes. This design choice hindered top speed, which could have been improved with more aerodynamic swept wings — however straight wings were seen as a necessary compromise, as this wing style was strong and stiff enough to be outfitted with wingtip fuel pods and afforded the Scorpion better range.

In 1949, the Soviet Union produced their first atomic bomb; combined with a Tupolev Tu-4 strategic bomber — essentially a reverse-engineered B-29 Superfortress — and U.S. Air Defense Command was legitimately concerned. In order to better respond to the threat posed by Soviet airpower, the Scorpion was outfitted with guided air-to-air missiles, a first for the United States.

Additionally, the F-89 was the first airplane to be equipped with the Air-2A Genie, an unguided, nuclear-tipped and air-launched rocket intended for use against enemy bomber formations. Given the enormous blast radius of the missile, it was decided to not to outfit it with any kind of guidance system. The missile, tested only once, was in service nearly until the end of the Cold War when it was retired in 1985.

In total, Northrop produced over 1,000 of the powerful little airplanes, of several different variants. The last of these were retired in 1969, when the Air National Guard finally divested themselves of the airplane. Although not the fastest, most high-performance fighter, the F-89 Scorpion was — when outfitted with the atomic Genie missile — nothing to sneeze at.

Caleb Larson is a Defense Writer based in Europe.