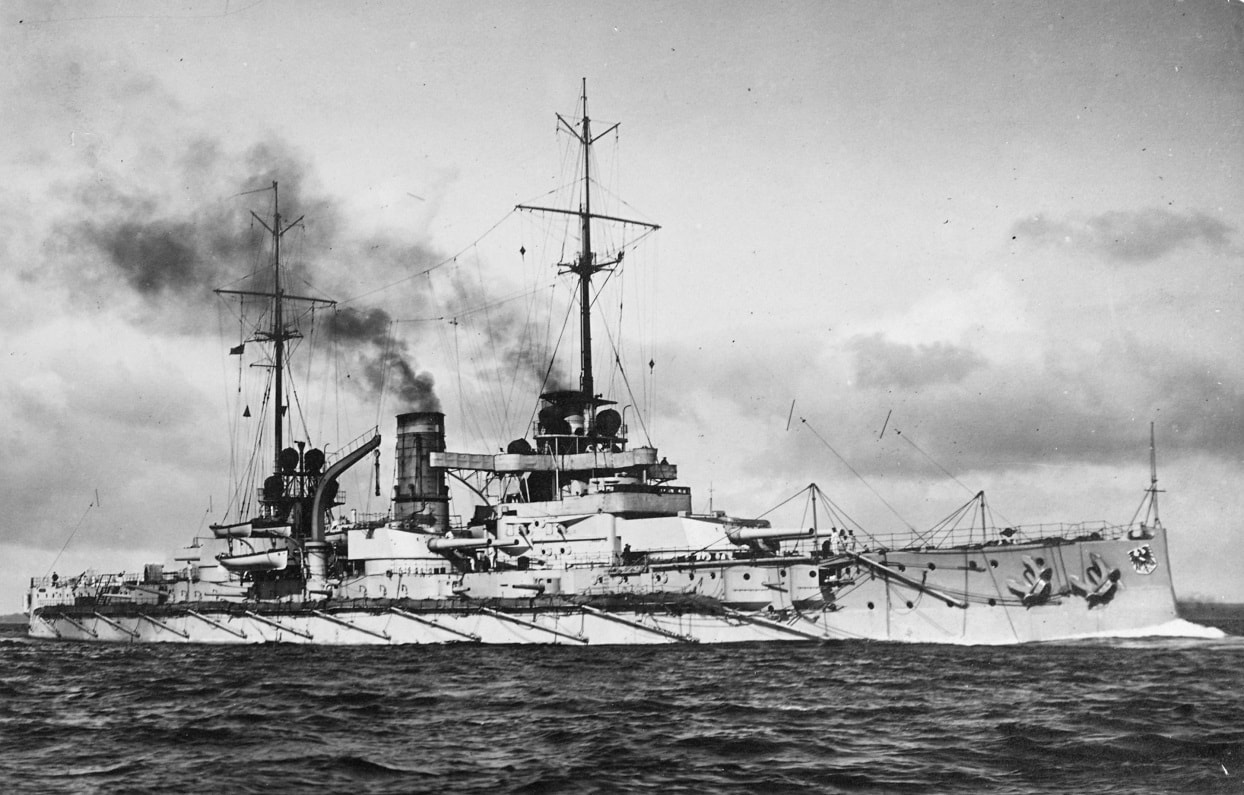 In 1917, even as Germany began to prepare to launch what it expected to be war-winning offensives in the Atlantic and in France, its naval architects began to think about the postwar naval balance.

Even if Germany could knock out France and Italy as great powers, it could only defeat Britain by applying economic pain, and that pain would end when the guns fell silent. Thus, Germany could look forward to renewed naval competition with the British, and almost certainly the Americans.

Accordingly, the Germans developed designs for the advanced battlecruisers and battleships that would have become the new High Seas Fleet- if Germany had won the war.

Until mid-1918, Germany expected to win the war, and expected that its future security threats would come primarily from maritime powers, namely the United States and the United Kingdom. Germany would win territorial and political concessions in the east and the west, and might be able to recover some of its colonial territories (or perhaps take some from France and Italy. Consequently, Germany would need a competitive surface fleet in addition to its U-boats. The war had slowed capital ship construction in Britain and Germany (although notably not in Japan or the United States), and existing German ships were quickly approaching obsolescence.

The only super-dreadnoughts immediately available to the Germans would have been the four ships of the Bayern class (in reality, only two of the ships were completed) and the seven battlecruisers of the Mackensen-class and Yorck-class (of which none were completed). The Bayerns could make twenty-one knots, and carried eight 15” guns on a 32,000-ton displacement. Both the Mackensen and Yorck classes were a major step up from the pre-war battlecruisers. The Mackensen’s carried eight 13.8” guns on a 36,000-ton displacement, with a speed of twenty-eight knots, while the Yorcks would have carried eight 15” guns, displaced 38,000 tons, and made twenty-seven knots.

Against this, the Kaiserliche Marine faced twenty-one British super-dreadnoughts and four modern battlecruisers, along with another thirteen American super-dreadnoughts. Both the British and the Americans threw themselves into post-war construction, with the latter planning seven more battleships and six battlecruisers, and the former four battleships and four battlecruisers. Having won the war, Germany would have immediately faced a very threatening maritime environment.

The L20e α class was the beginning of the solution. Displacing 48,000 tons, the L20e α would have carried eight 16.5” guns in four twin turrets and made twenty-six knots. The L20e α would have been roughly the same size as the proposed British N3 class, which traded three knots of speed for a much heavier main armament (9 18” guns in three triple turrets). The American South Dakotas would also have tipped the scales at 48,000 tons, with a speed of 23 knots, but would have carried twelve 16” guns in four triple turrets.

The concentration on speed suggests that the German were prepping for a fast battleship squadron, similar in many ways to that of the Japanese. Japan’s Nagato and (planned) Tosa-class battleships could make twenty-six knots; the successor Kii-class would have made nearly thirty. In contrast to the British and American approaches, there was to be little gap between the fast battlecruisers and the slow battleships. Germany’s decision on this point may have stemmed from lessons learned in the Battle of Jutland, where its battlecruisers endured enormous punishment while taking limited losses. It is likely a decision that would have paid off down the line; the slow battleships of the USN and RN were notably limited in the Second World War.

In the real world, Germany was beaten, the High Seas Fleet was scuttled at Scapa, and the three great naval powers settled their differences with the Washington Naval Treaty. That treaty sharply limited naval construction, prohibiting the construction of an entire generation of new battleships. It offered a “naval holiday” that gave the people of the world a much-needed rest after several years of bitter conflict.

The Washington Naval Treaty was a means of managing competition between recent allies who could foresee conflict on the horizon. Had Germany won the war, relations with both the United States and the United Kingdom would have remained tense. Under these circumstances it is difficult to imagine how Germany would have participated in a multilateral arms control agreement like the Washington Naval Treaty. Having just escaped the Great War (and the influenza that followed it) the world would almost immediately have been thrown into another great naval race. This would have produced an altogether more dangerous world, with four different great powers struggling for maritime dominance.

Robert Farley is the author of The Battleship Book. He serves as a senior lecturer at the Patterson School of Diplomacy and International Commerce at the University of Kentucky.

In this article:Battleships, Imperial Germany, Navy, NotHome, World War I