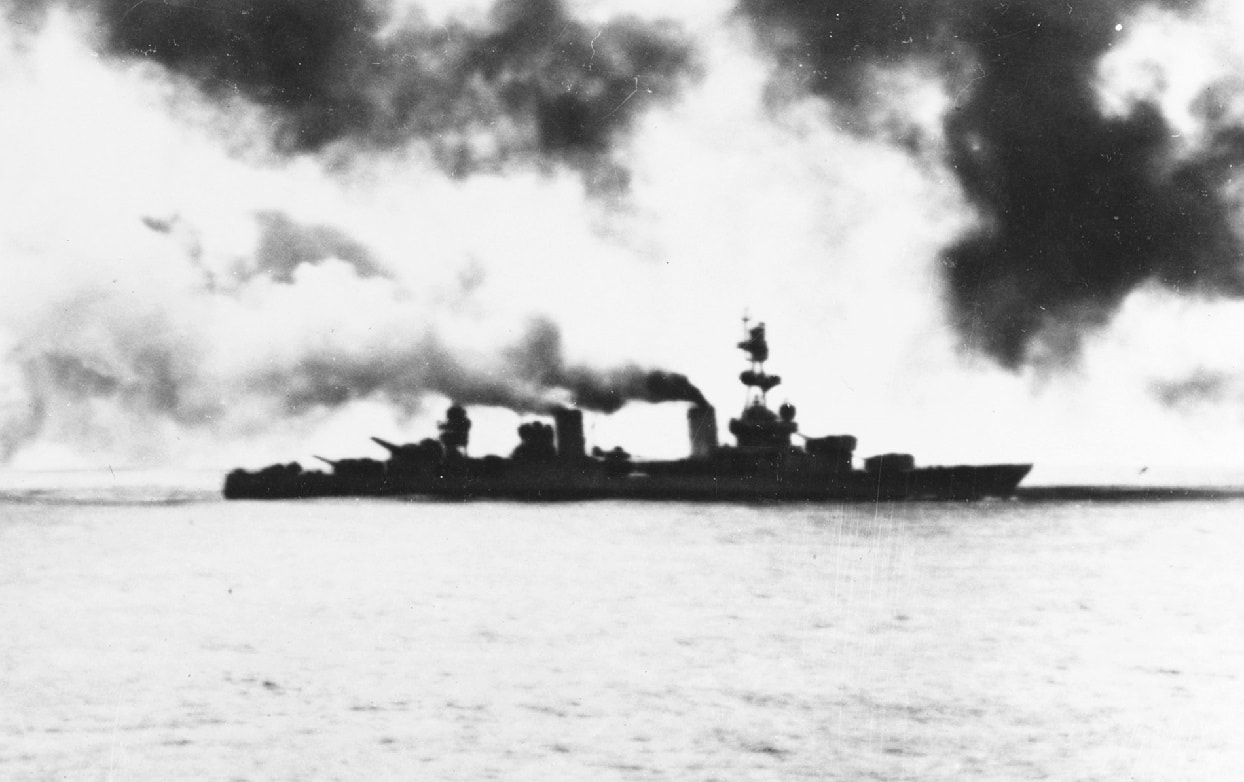 The U.S. Navy heavy cruiser USS Salt Lake City (CA-25) in action during the Battle of the Komandorski Islands on 26 March 1943, with an enemy salvo landing astern.

USS Salt Lake City, A Short History: During the Second World War, the U.S. Navy’s Pensacola-class cruiser (later heavy cruiser) USS Salt Lake City (CL/CA-25) earned 11 battle stars during engagements in the Pacific including action at the Battle of Cape Esperance, the Battle of Komandorski Islands, and the Battle of the Philippine Sea. She operated in the gunfire and covering force – Task Force 54 – during the final phases of securing Iwo Jima, where she provided call-fire on the Japanese-held island; and then during the initial campaign during the invasion of Okinawa.

After the war, she took part in the initial stage of Operation Magic Carpet to return veterans of the Pacific theater to the United States, but was added to the list of warships to be used as a test vessel for Operation Crossroads, the Atomic Bomb Experiments and Evaluation Tests in Bikini Atoll. USS Salt Lake City survived two atomic bomb blasts in July 1946, and was later sunk as a target hull on May 24, 1948.

Last week the warship received a special honor from the NCAA college football Utah Utes, who ditched their more colorful and vibrant uniforms for those of “battleship gray” with the ship’s unofficial motto “One Ship Fleet” on the back of the neck for Military Appreciation Night.

In addition to the gray jerseys, the Utes also donned a very special football helmet that featured scenes of the heavy cruiser in action in the Pacific during World War II. Each of the 150 helmets that the team used was hand-painted by Nebraska-based artist Armando Villarreal, a U.S. military veteran, who sought to honor those who served on the USS Salt Lake City¸ as well as other Second World War veterans including his late grandfather, who was a signalman on a warship.

“I was in the Army. I served in Kosovo and then in Iraq when the war started there,” Villarreal told KSLTV.com “My grandpa was in World War II. Very humbled and honored that I get to be part of this.”

It wasn’t just Villarreal who felt an immediate connection to past veterans via the project.

“It just seems fitting this year. Everyone knows someone in the military, and honestly, it’s fantastic,” explained the team’s equipment manager Ryan Barker. “Just looking at it reminds me of my time on ships. So, the fact that we get to wear these and represent, not just the men and women on this ship, but really, over all branches, is special.”

As noted, each helmet was hand-painted so while the theme is the same, there are some slight variations.

“The coolest part is when you get about 75 of these all together in our helmet trunks, see them all lined up, and you can tell the little differences in each one,” said Barker. “All of the shadows are a little bit different, the directions that your tracer fire is kind of going.”

On Saturday, Number 23 ranked Utah managed to take down Number 3 ranked Oregon. Did the helmets play a role? Probably not, but it certainly helped to honor those who served on the WWII-era cruiser.