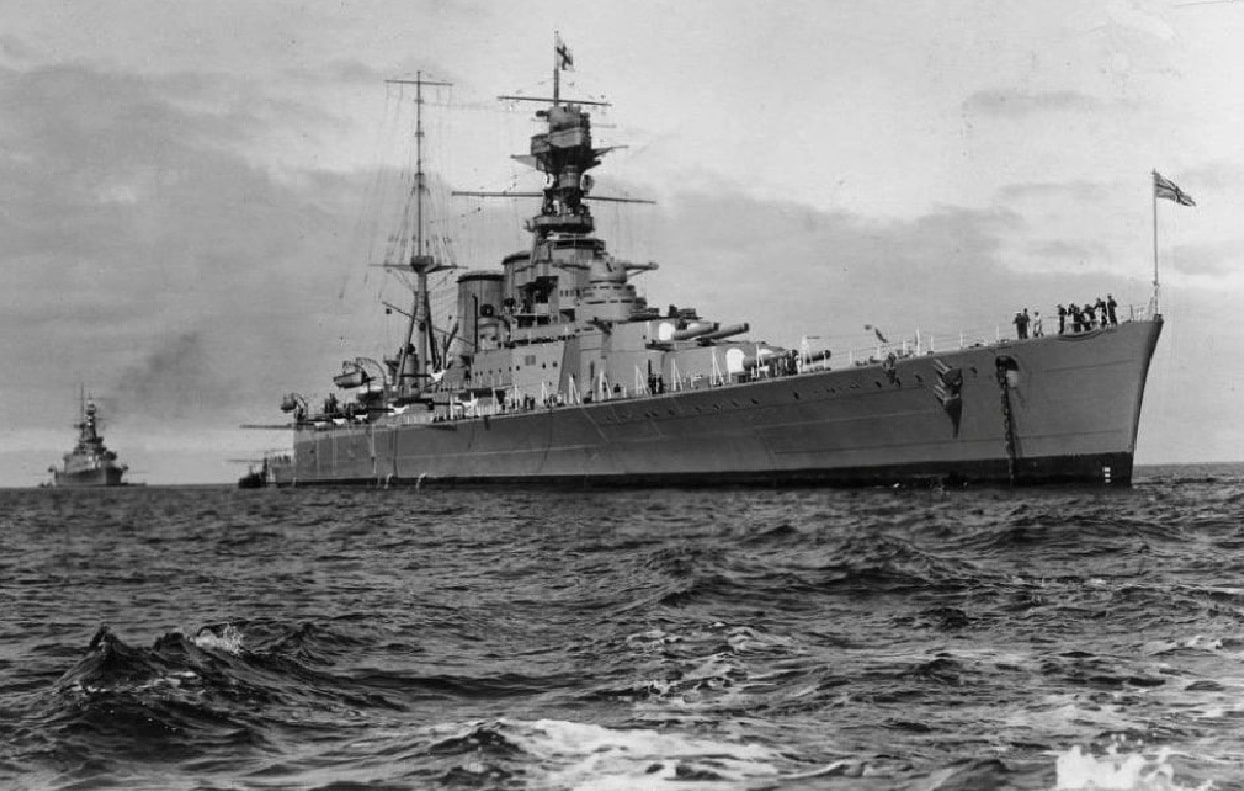 The Royal Navy’s HMS Hood will forever be linked with the German Kriegsmarine battleship KMS Bismarck, as the former vessel was sunk on May 24, 1941 during the Battle of the Denmark Strait. Her demise wasn’t the greatest loss the Royal Navy would suffer during World War II, yet it was a tragedy that shook the service for decades.

More importantly, the Hood should be remembered for other reasons – she was an exceptional warship, and was the most powerful vessels in the world during the early interwar period, and she served as the “proud steel ambassador” of the Royal Navy, showing the Union Jack in harbors around the world from 1921 to 1941.

For 20 years, Hood was the largest warship in the world, and until the commissioning of the new aircraft carrier HMS Queen Elizabeth there had never been a larger Royal Navy warship than HMS Hood.

Considered invincible in the minds of the average citizen, “The Mighty Hood” certainly became more than her namesake, Samuel Hood, 1st Viscount Hood, admiral of the Royal Navy during the Seven Years’ War and the American Revolution.

Of note is the fact the ship was christened by Lady Hood, widow of the late Admiral Sir Horace Hood, a descendent of Samuel Hood. Sir Horace had been killed onboard HMS Invincible at the Battle of Jutland in 1916.

HMS Hood was the first of four planned Admiral-class battlecruisers, but was the only one built.

Her construction had already begun during the aforementioned Battle of Jutland in mid-1916, but she wasn’t completed until 1921. She displaced 47,000-tons and was armed with eight 15-inch guns.

In July 1940, the battlecruiser was joined by the Royal Navy aircraft carrier Ark Royal with Force H, and took part in Operation Catapult, the destruction of the French fleet at Mers-el-Kébir at Oran, on the coast of French Algeria.

The goal was to neutralize or destroy the French ships to prevent their falling into German hands following the defeat in the Battle of France. The British bombardment of the base killed nearly 1,300 French servicemen, sank the French battleship Bretagne and damaged two other capital ships.

Less than a year later, Hood would also be sunk when the Royal Navy attempted to engage the German heavy cruiser Prinz Eugen and the Bismarck. It has been widely believed that Hood took a direct hit from the Bismarck to the aft magazine.

However, other theories suggest that there may have been explosion of the Hood‘s own torpedoes or that it was initiated by four-inch ammunition that was stored outside of the magazine. Another theory raised was that a shell may have discharged from within one of the 15-inch guns on the battlecruiser, which could have ignited the magazine.

However, a recent examination of the wreck revealed a detonation in the rear magazine, which held the 15-inch shells and cordite propellant for those guns. It was likely the devastating explosion was triggered by a blast in the magazine under the mainmast.

The Hood‘s armor was too thick for a direct hit to have caused the explosion, but reports from those on the nearby HMS Prince of Wales said a fire was raging for several minutes prior to the explosion, and it is now believed that a hit from Bismarck damaged the armor plating enough for the first to have penetrated the ship and set off the blast.

Whatever caused the explosion, it proved fatal for the ship and most of her crew.

Out of the of 1,418 sailors onboard, only three including Midshipman William Dundas, Able Seaman Robert Tilburn and Signalman Ted Briggs survived. Among the men last was Vice Admiral Lancelot Holland. Of the Hood, all that remained on the surface was a mass of floating debris and an oil slick that was reported to be four-feet thick!

The loss of the Hood was a devastating blow, and the Royal Navy vowed revenge, and resulted in a pursuit of Bismarck that involved dozens of warships. Two days later, 16 Fairey Swordfish biplane torpedo bombers from the aircraft carrier HMS Ark Royal scored a hit that rendered the battleship’s steering gear inoperable.

She was then targeted by two British battleships and two heavy cruisers. To save his crew and to keep the Bismarck from falling into British hands, Captain Otto Ernst Lindemann ordered the ship scuttled.

Out of a crew of 2,200 men, only 114 survived. Captain Lindemann, who was seen standing at attention at the stern of the ship as she sank, was not among them.