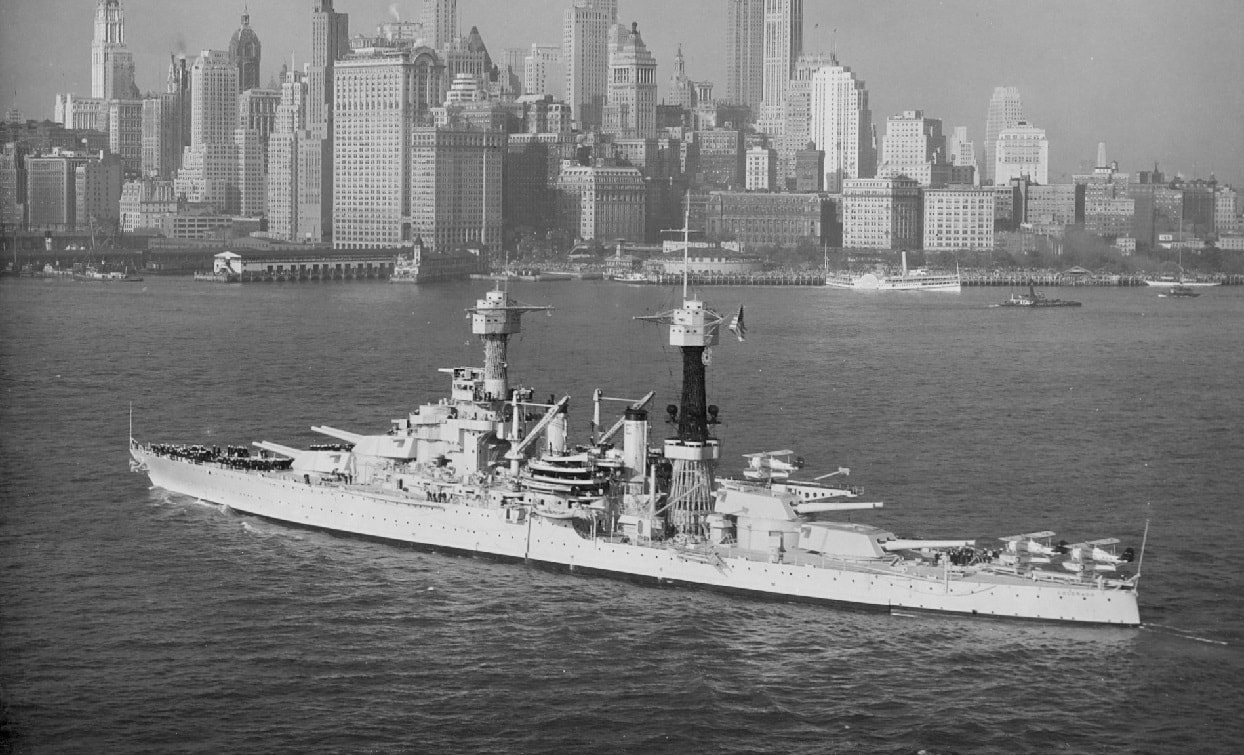 Sometimes known as the “Battleship That Wasn’t There,” the USS Colorado (BB-45) was one of the nine active battleships serving in the Pacific Fleet on December 7, 1941. While eight of those behemoths were moored along Battleship Row on that infamous day, BB-45 wasn’t there.

She had finished intensive training exercises in the early summer of 1941 when she was ordered to Puget Sound Navy Yard on the west coast. Her refit was completed on March 31, 1942, and she was thus ready for action – first being deployed to protect San Francisco from a Japanese attack.

The Road to War

Design work for the new Colorado-class battleships began in 1916 even before the United States had entered the First World War. The new ships were essentially copies of the preceding Tennessee-class, but with vastly improved armament. The main battery was increased from twelve 14-inch (356mm) guns to eight 16-inch (406mm) guns. The 32,600-ton battleships were also to be the last class to be completed of the standard type.

Built at Camden, New Jersey, BB-45 was commissioned in August 1923, and made her initial cruise to European waters later that year before being transferred to the Pacific, where she spent most of the remainder of her active career. In the years leading up to the Second World War, Colorado served with the Battle Fleet and took part in exercises and training.

In addition, she took part in peacetime operations including a Trans-Pacific voyage to Australia and New Zealand in 1925, and later took part in the search for missing aviator Amelia Earhart in 1937.

While one of the older battleships to be deployed to the South Pacific to guard against a possible Japanese offensive, Colorado took part in the Tarawa invasion, and supported the landings at Kwajalein and Eniwetok in the Marshal Islands in January and February 1944 and the Marianas operation in June and July. On July 24, 1944, while conducting shore bombardment of Tinian, USS Colorado was hit by Japanese shore batteries, which resulted in serious casualties, with 43 sailors killed and another 198 wounded. However, the battleship remained operational and continued shelling the island where she provided fire support for the invasion force.

After undergoing extensive repairs on the West Coast, she arrived in Leyte Gulf and began the invasion of Leyte in the Philippines. She was struck by two kamikaze fighters, which killed 18 crewmembers and injured 72 sailors, while it caused moderate damage to the ship. Despite the damage, she remained at sea and conducted a bombardment of Mindoro in December 1944.

She received urgent repairs, and while damaged by accidental gunfire during the pre-invasion shelling of Lingayen Gulf, she took part in the U.S. invasion of Okinawa, and later covered the occupation of Japan. For her actions in the war, USS Colorado earned seven battle stars. After taking part in Operation Magic Carpet, during which she made three runs to Pearl Harbor, she was place out of reserve commission in early 1947. After more than a decade in “mothballs,” BB-45 was sold for scrapping in July 1959.