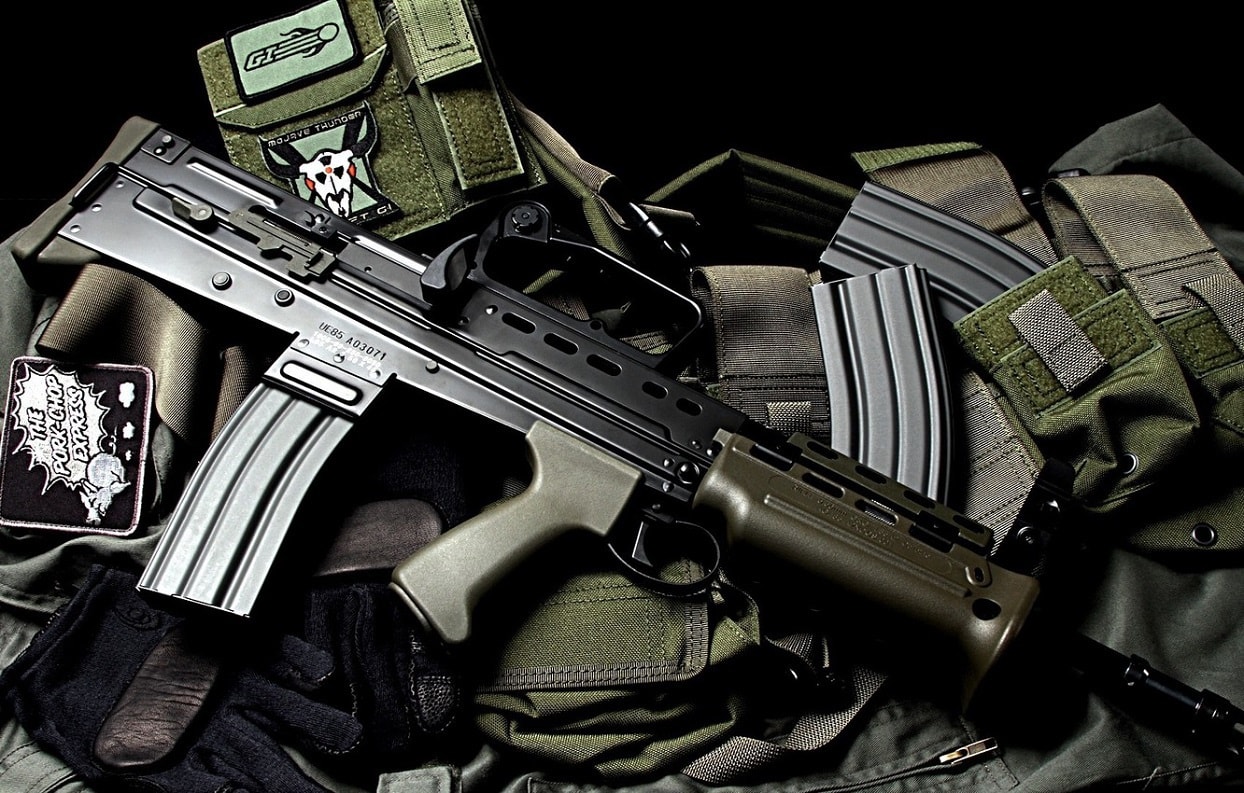 L85A1 Assault Rifle, a 5 Minute History: In the mid-1980s, the United Kingdom became the first major NATO power to adopt a so-called “bullpup” assault rifle. The L85A1 Individual Weapon was unique in that it placed the rifle’s operating system and magazine well behind the trigger. The result was a weapon as short as a submachine gun with the performance of an assault rifle. The adoption of the L85A1 was a watershed moment in the history of small arms marred by the the rifle’s poor performance in the field.

In 1954, the United Kingdom adopted its first truly new infantry rifle in half a century: the L1A1. The L1A1 replaced the legendary Lee Enfield bolt action rifle, which had served through two world wars but totally obsolete in the age of atom bomb warfare. The Soviet Union had already fielded the AK-47, details of which were leaking out into the West after a secret introduction. The prospect of British troops armed with bolt action rifles going up against Soviet troops with fully automatic rifles was no doubt terrifying, and the British Army of the Rhine would have been heavily outgunned at the small unit level.

The new rifle, L1A1, had a twenty round detachable magazine and was chambered in 7.62×51 NATO. It was also semi-automatic and, unlike the original FN FAL battle rifle it was based on, built on the Imperial measuring system. The L1A1 served for decades, through the Suez Crisis and the Falklands War—where ironically British troops fought Argentinian troops armed with fully automatic FAL rifles.

By the 1980s it was clear the L1A1 needed the replacement. The NATO countries, starting with the United States, were gradually trading in their 7.62-millimeter battle rifles for 5.56-millimeter “assault rifles.” Although these smaller caliber weapons had a shorter range, they were lighter, easier to fire, and the new 5.56 standard meant NATO troops could share ammunition.

The Royal Small Arms Factory had just the weapon. In 1977, it had submitted the new Enfield Individual Weapon for NATO trials. The IW was chambered in the new 4.85-millimeter cartridge, which quickly became obsolete as it became clear 5.56 was the new standard. Engineers found that it was not difficult to rechamber the weapon in 5.56.

The resulting weapon was known as the L85A1 and entered service with the British Army in 1985. Like many assault rifles it operated on the gas piston, rotating bolt design and internally was in many ways based on the U.S. designed Armalite AR-18 rifle. The rifle featured an adjustable gas system with positions for normal use, adverse conditions, and launching rifle grenades. Rifles issued to infantry were equipped with the Sight Unit, Small Arms, Trilux) 4x optical sight with backup iron sights. Rifles issued to support units and vehicle crews had a built-in carry handle with iron sights.

The L85A1’s bullpup configuration made for a compact weapon: even with a 20-inch barrel the rifle was only 30.9 inches long. By contrast the U.S. Army and Marine Corps’ M16A2 with 20-inch barrel was 39 inches long. This made the rifle easier to handle in tight spaces, such as urban terrain or inside a Warrior infantry fighting vehicle. Downsides common to early bullpups included a fixed length of pull and the need for left-handed shooters to learn to shoot with their right hand–or have the unpleasant experience of ejecting brass pummeling them in the face.

The L85A1–often referred to as the SA80–was seemingly off to a bright start but users quickly discovered problems. Early rifles produced at the Royal Small Arms Factory at Enfield were of poor quality with production improved only after a new factory at RSAF Nottingham went into operation. Numerous design flaws continued to go unaddressed–more than two dozen issues were catalogued by 1990, including corroded bolts, extractor issues, broken firing pins, and faulty magazine release mechanisms. The weapon showed extremely poor reliability in Operation Granby, the UK’s participation in the 1991 Persian Gulf War.

The rifle was praised for its accuracy when it worked properly, but that was nowhere near often enough. A number of fixes were implemented to address the most severe problems, but the L85A1 continued to have problems throughout the 1990s. In 1998, German small arms manufacturer Heckler and Koch received a contract to modify L85A1s to the L85A2 standard, incorporating further changes designed to boost reliability.

In 2016, the British Army began converting rifles to the -A3 standard. The -A3 standard is mainly a functional improvement rather than reliability upgrade, meant to keep the rifle useful until 2025. The -A3 involves upgrades to the upper receiver, a new handguard with a full-length Picatinny rail, and compatibility with the Heckler and Koch AG36 underbarrel grenade launcher. The SUSAT sight is replaced with a Trijicon ACOG 4x sight or Elcan Specter lightweight day sight.

Although London eventually ordered three hundred thousand L85s, outside the British Army the weapon was a failure. A small number were donated to Commonwealth countries as foreign aid, but no other country actually bought the rifle. British Special Forces, including the SAS and SBS preferred the M16 rifle and later a version of the M4 carbine, the C8, produced by Colt Canada. Not even the Falkland Islands Defense Force equipped itself the L85, instead choosing the Steyr AUG.

The L85A3 of today is an accurate and reliable weapon, but it took the UK government too long to correct the problems. Over the years the British Army has spent a total of $461 per rifle to make the weapon reliable, which is almost enough to completely replace the rifles with M4 carbines. If the army sticks to a schedule of buying new rifles in the mid-2020s we could see the British Army adopt a new, proven, likely foreign design—bringing the troubled history of the L85 rifle to a close at last.