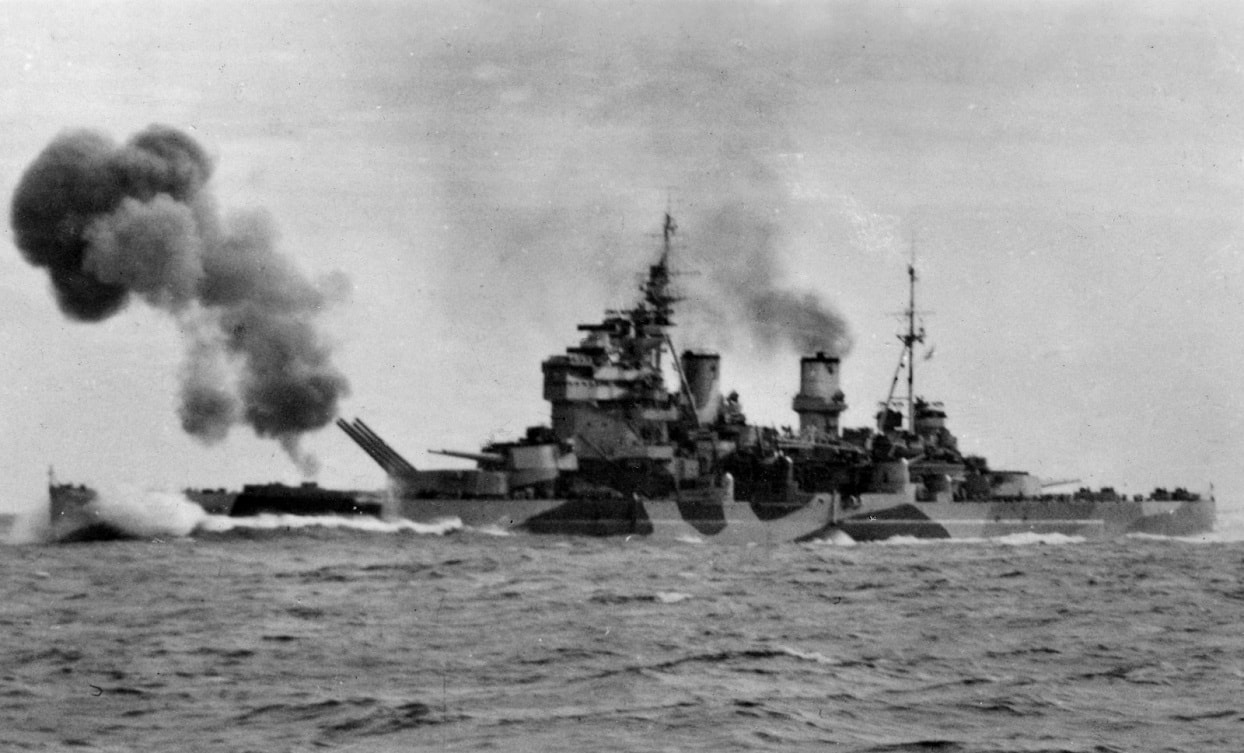 The five battleships of the King George V class served the Royal Navy honorably during the war, participating in the destruction of the battleships Bismarck and Scharnhorst along with an array of other missions. HMS Vanguard, the last battleship ever built by the United Kingdom, did not enter service until after the war. Neither of these classes, however, were the apogee of British battleship design. Instead, the Lion class—a group of six ships of advanced design and high capabilities—were initially intended to lead the battlefleet of the Royal Navy in its next war. But the war came too soon, and the Lions never saw service.

The Royal Navy entered the mid-1930s with an odd assortment of capital ships, including the two intermediate ships of the Nelson class and a variety of modernized and unmodernized battleships and battlecruisers. Reconstruction of HMS Hood, the Renown class battlecruisers, and the Queen Elizabeth class battleships was hoped to bring these ships up to modern standards, but the Navy still required new vessels. The five ships of the King George V class, while excellent ships, remained creatures of the interwar Treaty system. Bound to 35,000 tons, they carried 14” weapons in part because of a desire to adhere to the Second London Naval Treaty, and in part out of other design requirements. When it became clear that Japan would unbind itself from the terms of the London Naval Treaty, the restrictions on battleship designs eased considerably.

Initial design work for the Lions, the first post-Treaty British battleships, began in 1938 and envisioned a ship of 45,000-ton full load, armed with nine 16” guns in three triple turrets. The secondary armament and armor scheme would have been similar to the King George V class, with dual-purpose 5.25” guns. The ships would have made 28 knots, roughly the same speed at the King George Vs but somewhat slower than extant British aircraft carriers, and considerably slower than the American Iowa class. The Lions also remedied the short range of the King George Vs, which proved an operational as well as a strategic drawback. The ships would have taken on classic Royal Navy capital ship names, including Lion, Temeraire, Conqueror and Thunderer. Two other ships were projected, but never received names. Lion and Temeraire were laid down in 1939, while Conqueror and Thunderer were projected for 1940 and 1941.

As was the case in World War I, however, the advent of war delayed the construction of the large battleships. Anticipating the need for smaller vessels (especially in the anti-submarine campaign), the British government decided to abandon the new battleships, proceeding only with the construction of HMS Vanguard, a unique vessel intended for service in the Pacific, and the completion of Anson and Howe, the last two ships of the King George V class. Construction on Lion and Temeraire ceased completely in 1940.

The delay gave the Royal Navy time to reconsider the design and incorporate war-time lessons. A 1942 modification of the design made the Lions a bit beamier in order to remedy concerns over torpedo protection. Horizontal protection against bombs also improved, in part because of the destruction of HMS Prince of Wales off Malaya in December 1941.

However, time did not ease the demands on British shipbuilding. Even after the completion of Anson and Howe, the demands of other ships (including aircraft carriers) took priority over the Lions. Work continued only on HMS Vanguard. This further delay gave the Royal Navy additional time to rethink the design of the Lions, and a variety of proposals for larger and smaller ships (including, at one point, a hybrid battleship-aircraft carrier) were considered and rejected. No further battleships would be laid down during the war.

Even late in the war, the Admiralty had not completely given up on the idea of battleships. The Iowa class seemed to offer a useful template for battleships in a peacetime navy, and even HMS Vanguard served capably in a “showing the flag” role. The Soviets, for whatever reason, also persisted in battleship design, at least as long as Stalin lived. But it became clear that the existing fleet was sufficient for whatever the Royal Navy might need in terms of battleships, and that there was little to be gained from constructing new 16” gunned ships.

In most configurations, the Lions would have been somewhat smaller, somewhat slower, slightly better protected Iowas, more effective than the U.S. North Carolina and South Dakota classes. Lion likely would have had little trouble with the latest German or Italian battleships, in part because of the latter’s fiscal inability to compete with the Royal Navy, and the former’s habitual inability to competently design battleships. Of course, they would have suffered badly under the guns of the Japanese Yamatos, but then they were far less expensive and in many ways more useful than those behemoths.

That the design process continued as long as it did is a testament both to the longevity of Great Britain imperial pretensions, and to the belief that battleships would remain an important factor in naval warfare. The late 1940s, which combined the increasing lethality of shipborne aircraft with the financial inability of the Royal Navy to maintain its existing fleet, disabused Britain of both these notions.

Dr. Robert Farley teaches at the Patterson School of Diplomacy and International Commerce at the University of Kentucky. He is the author of the Battleship Book and can be found at @drfarls.