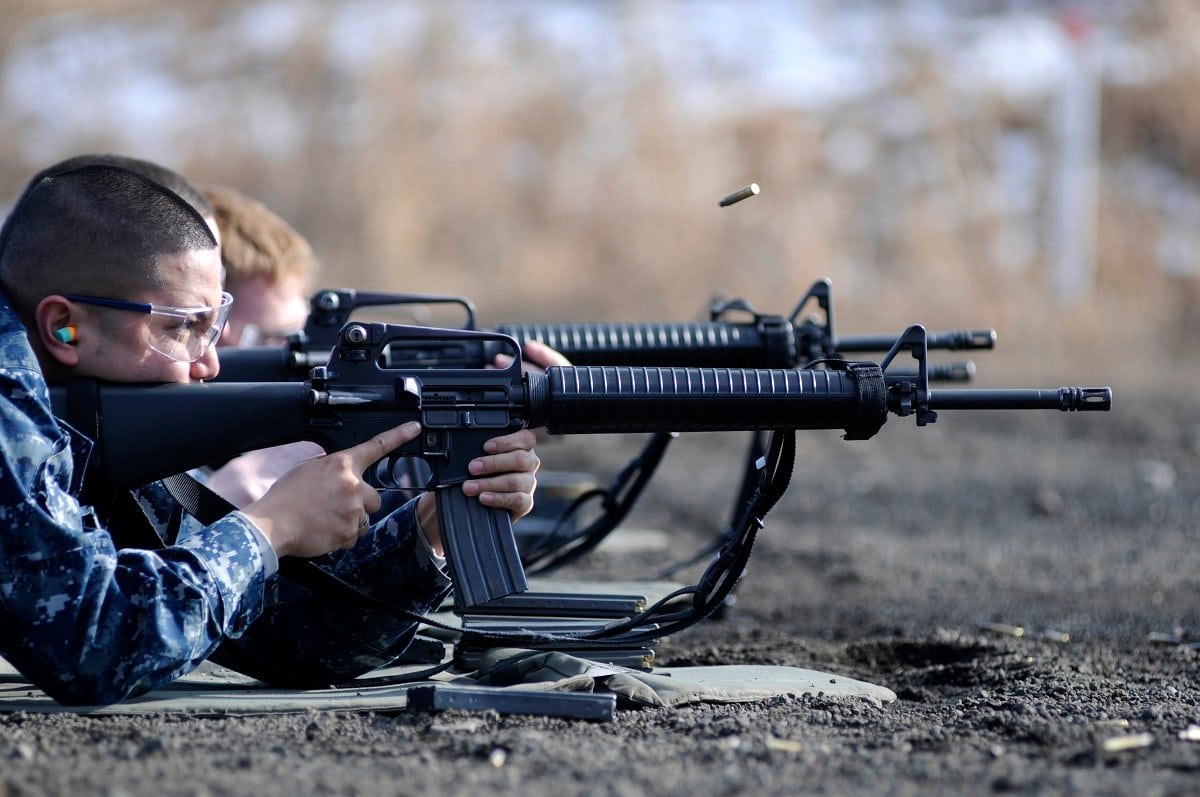 6 Deadliest Rifles of the US Military, Explained: Assault rifles, battle rifles, they’re all here. Though some of the rifle platforms originally entered service during the Cold War, some have been updated and upgraded for the 21st century — and they’re part of the reason why the United States military is so lethal.

No conversation concerning U.S. military rifles is complete without mentioning the M4 carbine, the smaller, more compact version of the iconic M16 rifle. Though the M16 and M4 are quite similar, the M4 is lighter and shorter overall, a design that optimizes the platform for situations where a smaller, more compact weapon would be an advantage, such as in close quarters urban spaces, or for soldiers riding in and dismounting from cramped armored vehicles.

Like the M16, it fires the NATO-standard 5.56x45mm cartridge, though thanks to the M4’s shorter 14.5-inch barrel, has a slightly lower effective firing range. The M4 design has proven popular and is used by a wide variety of countries throughout Latin America, the Middle East, Europe, and elsewhere.

The SCAR family of rifles came to life in order to fulfill a request by the United States Special Operations Command for a modular family of rifles chambered in 5.56x45mm and 7.62x51mm NATO-standard cartridges. The FN SCAR is therefore actually two different rifles, SCAR-L for light, and SCAR-H for heavy.

Both rifles can be used as designated marksman rifles, or for close-quarters weapons thanks to three available barrel lengths: Close-Quarters Combat, Standard, and Long Barrel. Though the rifles are outwardly quite similar, the SCAR-L uses NATO-standard STANAG box magazines, whereas the larger SCAR-H is fed from FN-designed magazines.

The Marine Corps’ new M27 is perhaps one of the most accurate standard-issue rifles in the United States military, giving new meaning to the Marine’s mantra “every Marine a rifleman.” The IAR benefits from a 16.5-inch free-floating barrel and a short-stroke piston action that give the M27 accuracy, range, and reliability improvements over both the legacy M16 rifle and M4 carbine

The M27’s parent rifle is a German-designed Heckler & Koch 416, which was famously used to take down Osama bin Laden during the famous SEAL Team Six raid in Abbottabad, Pakistan. The Marine Corps is further enhancing the M27’s lethality by issuing effective flow-through suppressors that allow lower-volume shooting without the possibility of burned powder and bullet detritus flying in the face of the shooter.

Though the M14’s reputation suffered during the United States’ involvement in Vietnam, the rifle itself is quite rugged and offers good accuracy and stopping power thanks to its larger 7.62x51mm NATO cartridge. Although the rifle was not well-suited to the wet jungle warfare of Vietnam — it was too heavy, too long, and its wooden stock prone to warping — these two updates to the platform have given the rifle a new lease on life.

The Army and Special Operations Command redesigned the M14 from the ground up, giving the battle rifle a new adjustable stock, pistol-style grip, collapsable bipod, as well as Picatinny accessory rails and a modern optic, to give the old M14 better range as well as lightening the rifle.

The Marine Corps had the same idea as the Army, though they decided to modify the M14 a bit differently, resulting in the similar M39 EMR. This modified rile also sported an adjustable stock and collapsable bipod as well as an accessory rail that could mont optics. It was however an interim measure and has since been mostly replaced in Marine Corps service by newer, group-up designated marksman designs.