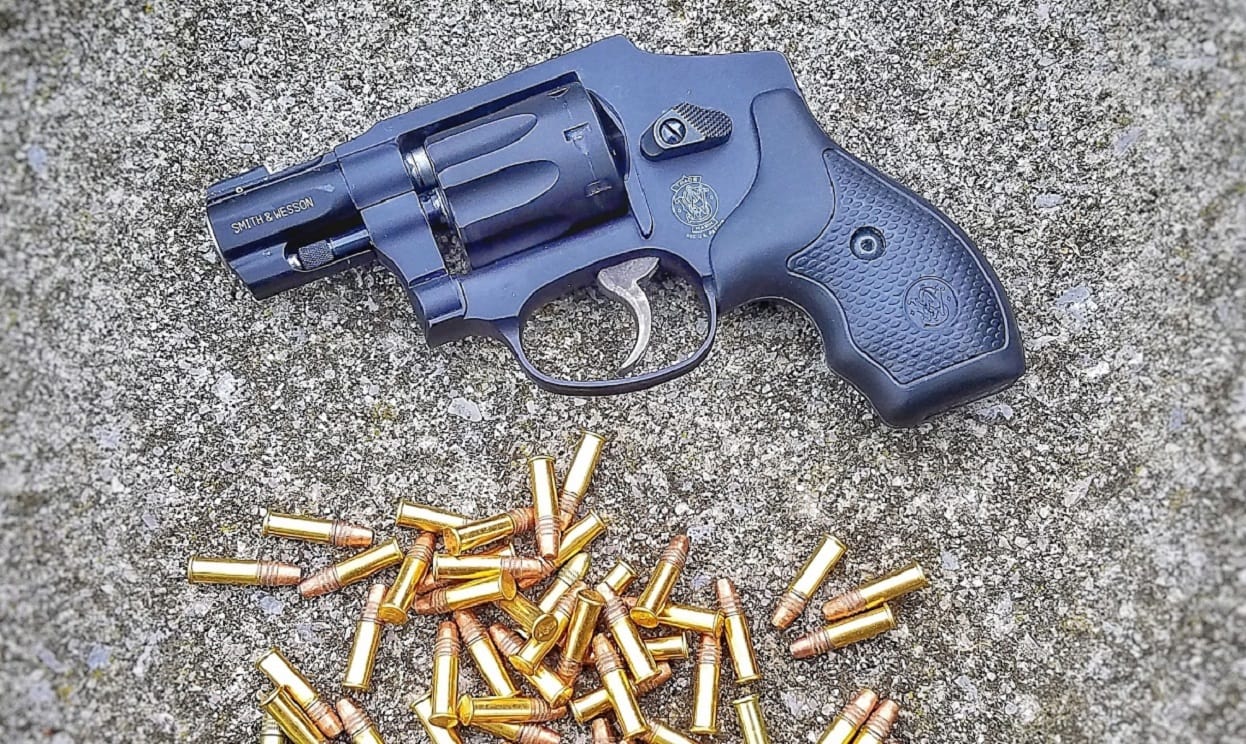 Smith & Wesson 351C, A Quick Review: Smith & Wesson is without a doubt one of the United States’ oldest and most experienced firearm manufacturers. With nearly 170 years of gunsmithing experience under their belt, it’s no wonder that their firearms are well regarded. Though Smith & Wesson does offer both semi-automatic pistols as well as rifles, perhaps their area of greatest expertise is with revolvers.

The Springfield, Massachusetts-based company has a wide array of revolvers in many chamberings on offer, though one of their special designs is the Model 351C.

The Model 351C is based on Smith & Wesson’s J-frame, a proprietary revolver frame size that is small, though still robust enough to comfortably handle both .38 Special +P and .357 Magnum ammunition. In the case of the Model 351C however, the cartridge is .22 Magnum.

Though the .22 Magnum cartridge is one of the smaller rimfire cartridges that is widely available, don’t let it’s small size fool you — the .22 Magnum has approximately double the amount of energy at 100 yards than the shorter .22 Long Rifle parent cartridge has at the muzzle, depending on ammunition and firearm combinations. Thanks also to the .22 Magnum’s small cartridge size, the Model 351C can accommodate 7 cartridges, offering shooters a relatively high cylinder capacity.

Though .22 Long Rifle cartridges would fit into the Model 351C’s cylinder, under no circumstances should the revolver fire that smaller cartridge, as the revolver could suffer catastrophic failure and harm the shooter.

The J-frame lineup is relatively lightweight, a factor that is aided by both an aluminum alloy frame as well as an aluminum alloy cylinder, though the revolver retains a stainless steel barrel. The small revolver comes with black synthetic grips complete with finger grooves and checkering that afford a firm grip despite the revolver’s small size.

And talk about small — the Smith & Wesson’s barrel is the definition of snub-nosed at just 1.875 inches. The Model 351C is intended as a low-profile, easily concealable revolver, and to that end is matte black to reflect less light. The small revolver also features an internal hammer, which prevents the pistol from snagging, say on a holster or cloth pockets.

Compared to some of Smith & Wesson’s other, pricier revolvers — some of which are priced upwards of $1,300 — the Model 351C is quite modestly priced at just over $700 on the S&W website.

With the Model 351C, Smith & Wesson has combined both the many years of firearm engineering under their belt with modern components and the small .22 Magnum rimfire cartridge to offer a well-thought-out concealed carry revolver. For those looking for an easily concealable revolver — look no further.