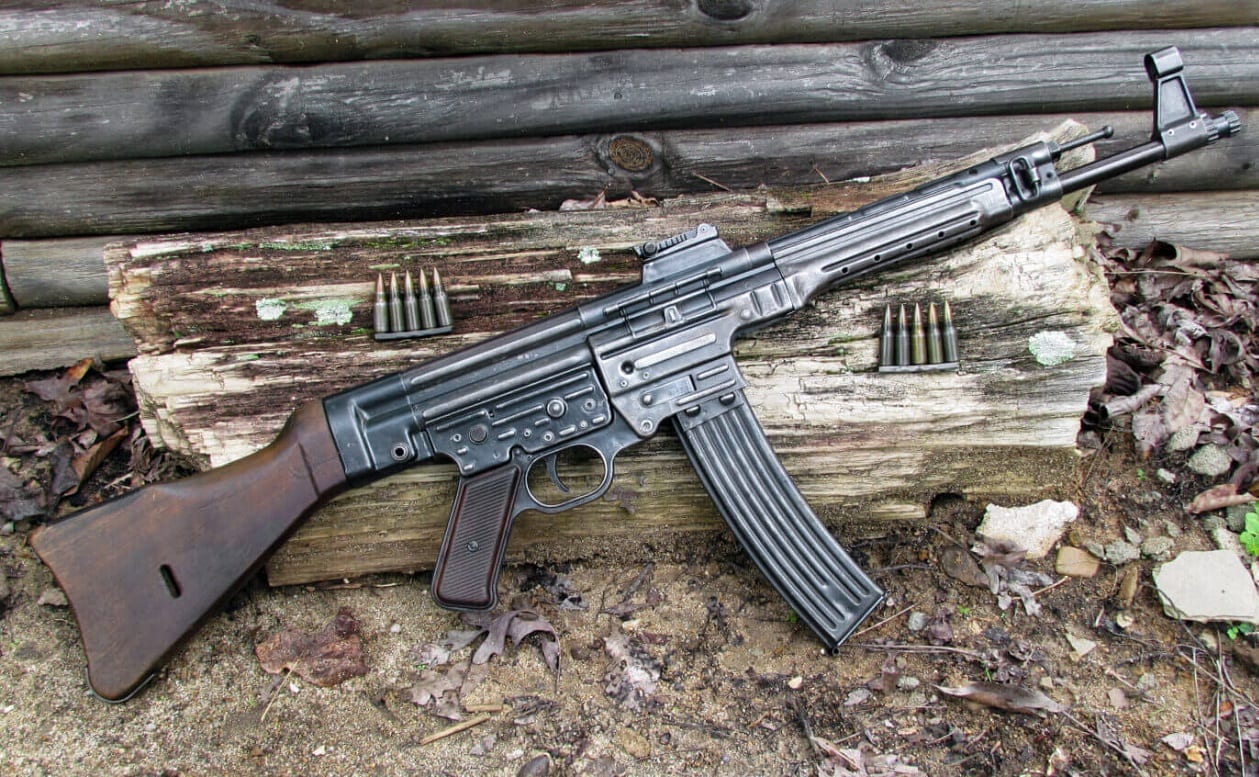 StG-44: A Short History: During World War II, the beleaguered German Army fielded a revolutionary new infantry weapon designed to make the German soldier the most powerful on the battlefield. The Sturmgewehr-44, or StG-44 was the first mass produced assault rifle. The weapon, urgently needed as Germany found itself increasingly losing the war, was a template for future weapons, including today’s AK-74M and M4 carbine.

At the outbreak of World War II, the German Army fielded two infantry small arms: the Karabiner Modell 1898 kurz, otherwise known as the 98k bolt action carbine, and the MP series of submachine guns. The 98k was a shorter, handier version of the Gewehr 98 rifle used during the Great War. It weighed 8.2 pounds, had a five round internal magazine, and an effective range of 600 yards. The MP series, including the MP-38, MP-40, and MP-41, were a new design of compact, folding stock submachine guns. The guns weighed approximately nine pounds, fired from a 32 round detachable magazine and had effective ranges of approximately 200 yards.

The combination of bolt action full-sized rifle and submachine gun was useful in the trenches of World War I, with the former valuable for aimed fire between trench lines and the latter useful for clearing trenches during ground offensives. Early in World War II, however, it became clear that the nature of warfare had changed, a point that became painfully clear as Germany began losing the war.

As the German Army fought across the Eastern Front, it became obvious Germany’s infantry arsenal was not up to the task. While accurate, hard-hitting and reliable, the 98k carbine could not deliver the volume of fire useful for repelling large numbers of Russian infantry, particularly in urban terrain. In the case of the MP series submachine guns, although they could unleash a hail of nine-millimeter bullets, the stopping power of the nine-millimeter round was limited and the weapons had a relatively short range.

The German Army needed a new weapon. The new weapon would be built around a cartridge not as powerful as the 7.92×57 Mauser round used by the 98k but heavier than the 9×19-millimeter round used by the MP series. It would have a detachable, large capacity magazine for quick reloading and could fire fully automatic. It would be a compromise weapon, sitting squarely between a traditional battle rifle and submachine gun.

During the 1930s, Germany had developed just such an cartridge, the 7.92×33 round. This was the same diameter as the 7.92.57 round used by the 98k but 24mm shorter and using half as much propellant. While the round was less lethal and had less range, it was controllable for fully automatic fire. Germany also issued contracts to develop a selective-fire rifle that could use the round.

By 1942, the famous small arms designer Hugo Schmeisser had produced an early version of the required rifle. Schmeisser’s weapon, the Haenel MKb42(H), was a piston-driven gun with frontal locking lugs on the bolt. The weapon had a pistol grip, wooden stock, hooded front sight and a 30-round magazine. It was heavy at 11.06 pounds. The weapon was easy to field strip, breaking down into six different parts, the upper and lower receivers connected by a hinge behind the magazine well.

The MKb42(H) prototype was reworked by Schmeisser and turned into the MP-43 operational weapon, entering service in 1943. In April 1944, the weapon was renamed the MP-44. The weapon was produced under the “machine pistol” (“MP”) designation after Hitler had decreed development of rifles was to cease and production of machine pistols was stepped up. After the weapon’s success on the battlefield, it was renamed the Sturmgewehr-44 (“Storm Gun”), reportedly by Hitler himself. Despite wartime shortages, German industry produced 425,977 StG-44s for the German Army.

One unusual variant of the MP-44/StG-44 produced during wartime was the MP-44 Krummlauf. The oddball project involved a MP-44 fitted with a curved barrel and mirror sights attached to the muzzle. The objective was to create a weapon that could be poked through the firing ports of halftrack armored personnel carriers, firing on enemy infantry attempting to place magnetic anti-tank mines on the sides of friendly vehicles. A large amount of German war resources were spent on the Krummlauf, far outstripping the theoretical value of shooting Red Army soldiers through firing ports, and few guns were actually produced.

The StG-44 was a truly revolutionary weapon, bringing firepower down to the individual soldier level. It was no doubt an influence for Mikhail Kalashnikov, father of the AK-47 assault rifle. Some firearms enthusiasts believe Huge Schmeisser, imprisoned after the war by the Soviet Union is the true father of the AK-47, although this is an unproven and likely untrue theory.

The true legacy of the StG-44 is its design philosophy, of an intermediate cartridge mated to a fully automatic weapon with a detachable magazine. The same characteristics drive the British SA80 assault rifle, Chinese QBZ-95 assault rifle, and American M4 carbine. Although it lived for only a short time in the wrong hands, the StG-44 inspired small arms development for decades to come.