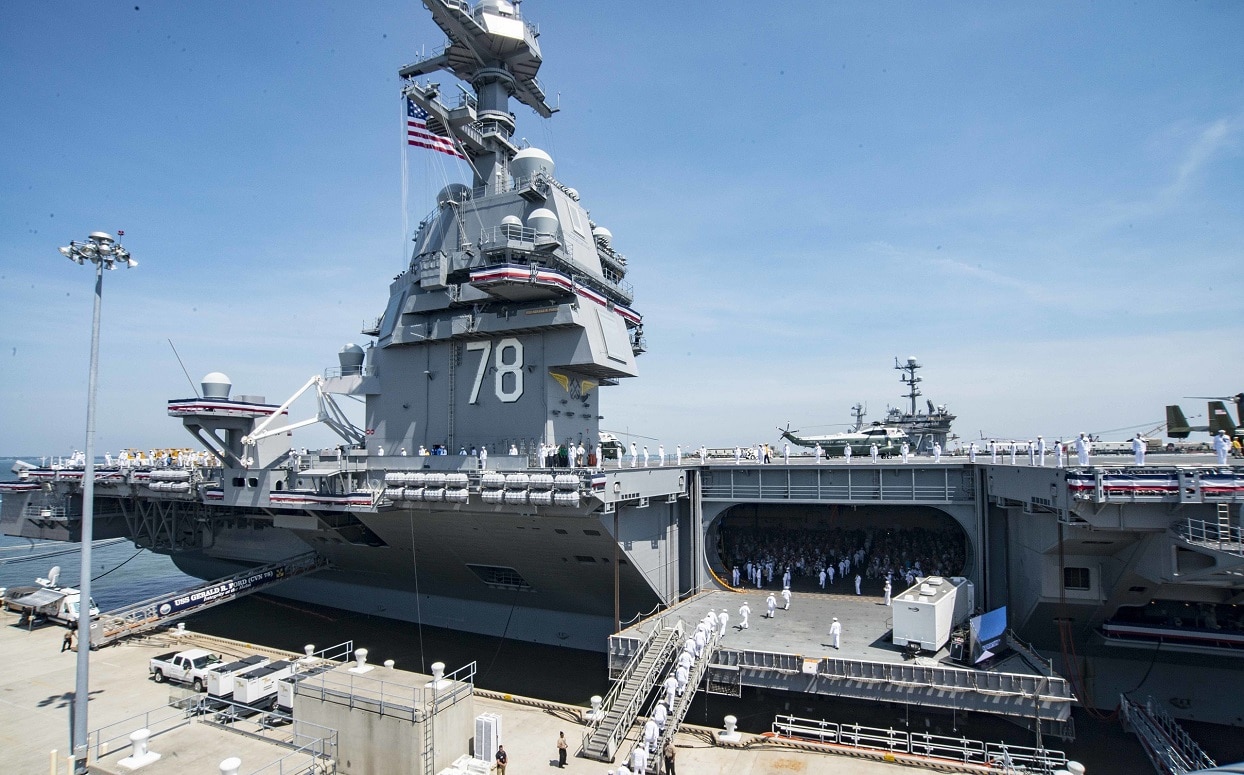 The US Navy is Cannibalizing Spare Parts for the USS Gerald R. Ford: A parts shortage on the first of the Ford-class has left the Navy scrambling.

The US Navy’s New Aircraft Carrier Has a Problem

The US Navy is cannibalizing parts for the USS Gerald R. Ford from another aircraft carrier under construction ahead of Ford’s maiden deployment in 2022.

The Navy is sourcing the spare parts from the USS John F. Kennedy, just the second in the Gerald R. Ford-class of carriers. A Navy spokesman told USNI News that parts are minor in nature, primarily switches and pumps.

“Examples of parts include HMI screens for stores elevators as well as motor controllers, power supplies, small pumps, limit switches, and valve actuators for various systems throughout the ship,” the spokesman explained. “This is not unusual early in a program and will occur less often as supply support matures.”

The United States Naval Sea Systems Command also told USNI that “in accordance with the Navy’s Joint Fleet Maintenance Manual, cannibalizations are being used as part of the process to augment readiness of CVN 78, and are only initiated after non-availability of materials has been established in the supply system or verification that alternate sources are not available.”

The new Gerald R. Ford-class supercarriers are enormous, and though they’re not the largest ever sailed by the United States Navy, they are the most sophisticated. They’ll replace the Navy’s previous nuclear-powered Nimitz-class carriers.

Compared to the Nimitz-class, the Fords can, in theory, support 25% more sorties per day, aided by a higher degree of automation and a new Electromagnetic Aircraft Launch System, which the Ford’s much greater electrical output supports. As a result, the Ford carriers require fewer crew members despite the increased sortie rate.

The Ford completed the last of its shock trials earlier this summer when the Navy detonated three 40,000 pound explosives underwater at progressively closer distances to the carrier. The tests validated the Ford’s computer-modeled design and ensured that the ships would withstand the rigors of battle.

“We’re designing and building these aircraft carriers to sail in some of the world’s most contested security environments,” Rear Adm. James P. Downey, program executive officer for aircraft carriers, explained in a Navy statement

“So when you think about the threats to warships posed by non-contact blasts and the number of sea mines in the inventories of navies around the world, the gravity and consequence of these shock trials really come into focus. The Navy’s ongoing investment in the design, including this modeling, will help ensure the resiliency of Ford’s integrated, mission critical systems in underway threat environments.”

Ford-class: What Happens Next?

Though the Ford-class offers hypothetical advantages over the earlier Nimitz-class, the Fords have been plagued with problems, particularly with their aircraft launch and recovery systems and the elevators that move airplanes and munitions between decks. Perhaps after cannibalizing parts from the USS John F. Kennedy, the Navy can rectify some of these problems.