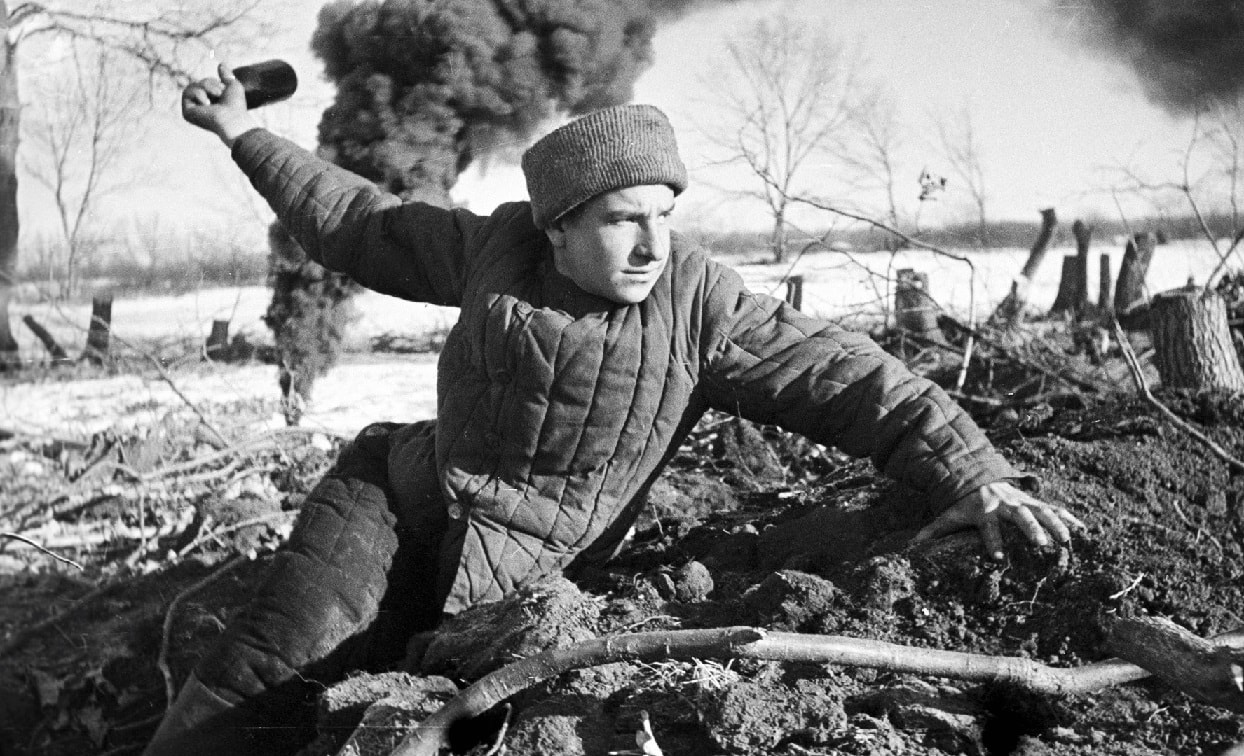 Even by the standards of World War II, the Eastern Front stands out as a cauldron of horror. Over four years of war, millions of soldiers and civilians died as Nazi Germany and the Soviet Union pummeled each other relentlessly. Although the Germans inflicted serious damage in 1941 and 1942, the Red Army took the offensive in late 1942 at the Battle of Stalingrad, and slowly ground the Wehrmacht into dust over the course of the next three years.

In recent historiography on the war, the question has become less “how did the Soviets survive?” and more “how did the Germans do so well?” Huge Soviet advantages in manpower, combined with the devastation inflicted by the Combined Bomber Offensive over Germany and the material support of the Western Allies, rendered German prospects exceedingly difficult. And yet the Germans entered the war with great optimism, and many believed at the time that the Wehrmacht came within a hair’s breadth of defeating the USSR for good. How might the Germans have won the war?

Aggressors generally have the advantage of choosing the moment to attack and can time that moment with the points of greatest advantage. In modern warfare, this often coincides with cycles of technological development and production.  Generally speaking, the Germans timed their attack on the USSR wisely from a technological point of view, as the Soviets had rearmed in the mid-1930s and thus had much obsolete equipment relative to the Germans. Moreover, the Soviets were at the beginning of a major force modernization that would provide the Red Army with new tanks, aircraft, and other weapons.

To be sure, the Germans were also modernizing. Panther, Tiger I, and Tiger II tanks entered German service after the beginning of Barbarossa, as did the Fw 190 fighter and some other advanced equipment.  But as David Glantz has argued, the balance of modernization almost certainly favored the Soviet Union, which was rapidly pushing out new equipment across the Red Army. While Germany did not fight Russia at the peak of its technological advantage (which may have come during 1940), the technological balance was shifting in Russia’s favor by the time the war began.

Could the Germans have made different operational decisions in 1941 and 1942 that would have made victory possible? Historians sometimes point to the decision in 1941 to pause the advance on Moscow in favor of dealing with Soviet forces in Ukraine, and the decision in 1942 to make the major push in the south rather than against Moscow.  Much of war is luck, and it is impossible to know how changes would have worked out, but neither of these theories hold much promise. As David Glantz and others have argued, Soviet military and political strength was broad-based, and not dependent on control of Moscow.

In 1941, the Wehrmacht redirected its attention from the thrust towards Moscow in late summer to instead deal with hundreds of thousands of Soviet troops in Kiev. The Wehrmacht won a shattering victory, at the cost of a substantial delay to the Moscow operation.  Similarly, in 1942 the Wehrmacht settled upon an advance in the south (ending up near Stalingrad) instead of attacking Soviet positions in the vicinity of Moscow. In both cases, the counterfactual promise of German victory depends on the idea that the fall of Moscow would somehow have led to the collapse of the Soviet state. There is precious little evidence to support this; the Soviets were prepared to fight for Moscow, but the Red Army also had plans to continue the fight if the capitol fell.  Moscow was economically important, but not so much so that the Soviets could not continue the fight.  And especially with respect to 1941, if the Wehrmacht had not destroyed Red Army forces in Ukraine, those units would have been available for counter-offensives in the winter.  All in all, it seems unlikely that specific operational changes would have made the difference.

During one of their rare mid-war conferences, Japanese diplomats expressed skepticism about the ability of Germany to defeat the Soviet Union, and suggested that the Nazi government should immediately declare the independence of countries such as Estonia, Latvia, Lithuania, and Ukraine in an effort to mobilize further support for an anti-Soviet crusade.  The subject peoples of the Soviet Union cared neither for the Bolsheviks nor for the Russians, and during the war fought in great numbers on the side of the Germans, even without promises of independence.  As Samuel Newland argues, a war framed specifically as an anti-Bolshevik crusade might even have generated considerable support among ethnic Russians.

Unfortunately for the Germans, the nature of the Nazi regime made it impossible to seriously contemplate such an effort. The Nazis justified their war machine on the fruits of conquest in the east, which left little room for the liberation of Russians, Ukrainians, or anyone else. The Nazis also built the Germany economy around exploiting slave labor in the east, to the point of mass starvation.  A different German government perhaps could have pulled off a different kind of war, but liberation was simply not something that the Nazis could manage.

It was hardly irrational for the Germans to believe that the Soviet Union might collapse from the multiple blows the invasion would inflict. In World War I, Germany, Austria-Hungary, and Imperial Russia fought a bitter war mostly across non-Russian territory. After less than three years of conflict, Russia suffered major internal dislocations that resulted in a revolution. By the end of 1917, Russia was out of the war entirely. The Germans believed that the Bolshevik regime was unpopular, that its roots with the Russian population ran shallower than those of the Czarist regime, that it was particularly hated by non-Russians, and finally that they could inflict much more serious military reverses on the USSR than they had inflicted on Imperial Russia during the first war.

In all of these things the Germans were correct. However, the Soviet state had built a strong foundation for itself, often through terror.  The purges that gutted the Red Army and other Soviet institutions also made them politically reliable for Stalin, reducing the chances of a coup. Tight control of most of the nation’s social institutions made it difficult for anyone to offer an alternative to the rule of the Communist Party of the Soviet Union.  This, combined with the utter barbarism of the German invaders, meant that many Russians felt no alternative but to fight on.  The Soviet regime was far more unified than the Czarist regime had been, and far less willing to tolerate dissent.

Questions of a “separate peace” between Germany and the Soviet Union periodically re-emerged during the war, despite the awful toll that each exacted on the other. Stalin reportedly considered a major revision of the border in the days following the invasion, although at that point the Germans showed little interest. Later in the war, the Japanese did their best to broker peace, but Hitler in particular remained unwilling to give up his crusade.

Even if they could have reached terms, neither Germany nor the USSR could have regarded a cease-fire as anything but a temporary expedient. German troops remained in possession of Soviet territory until relatively late in the war, and Stalin had developed a strong sense of the nature of the German regime. For their part, the Germans appreciated that any pause would probably benefit the Soviets in the long run, and that they needed to contend with the growing power of the Western Allies. It is hard to imagine that any peace treaty that did not result in regime change in either Germany or Russia could have endured.

In the planning for the war, the Germans had hoped, but not necessarily expected, that Japan would attack the Soviet Union in Siberia. Japan and the USSR had fought a brief but sharp engagement at Khalkin Gol in 1939, where the Red Army dealt the Kwantung Army a nasty bloody nose. It was not unreasonable to hope that Japan might relish a chance at revenge, and also an opportunity to seize Soviet oil resources in the Far East. In the event, Japan preferred to sign a nonaggression pact with the USSR in anticipation of its much wider war against the Western powers in the Pacific.

If the Japanese had instead decided to keep their attention focused on North Asia, they might well have enjoyed considerable short- and medium-term success. However, Siberia is huge, and the Soviet leadership correctly assessed that the European parts of the USSR were far more critical to the viability of the state than the Asian parts. However much success the Japanese might have enjoyed (and it should be noted that the Red Army badly overmatched the Japanese in terms of equipment, even in 1941), it is unlikely that Japanese victories could have drawn enough Soviet attention away from Germany to prove decisive.

Germany’s fatal error was a misunderstanding of the strength of the Soviet state, as well as the increasing quality of Soviet military equipment.  The assumptions that underlay the German war, and the arguments that justified it to the German public, made it nearly impossible to adopt the only strategy that might have had a chance of working. Knocking the USSR out of the war in the same way that they had knocked France out of the war was almost impossible given geographic reality.  Yet, by the end of 1941, Germany faced an unbeatable Allied coalition that swiftly undercut its ability to wage total war in the East.

Robert Farley is a senior lecturer at the Patterson School of Diplomacy and International Commerce at the University of Kentucky. Follow him on Twitter:@drfarls.